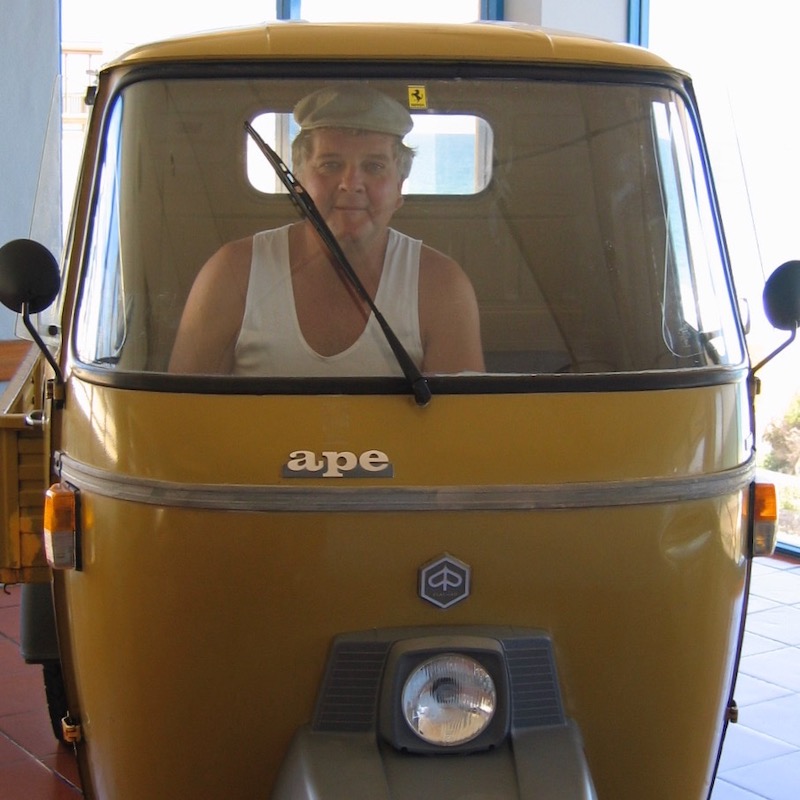 When he is not fussing over hundreds of diners each weekend at Jugiong’s Sir George Hotel, Kim Gamble thinks of Italy. He loves everything Italian. He slips on a singlet as they do under the Mediterranean sun and jumps into his mustard-coloured Ape (Italian for bee and pronounced ah-pay), so named by manufacturer Piaggio to reflect its work ethic.

Powered by a 200cc, two-stroke engine, the tiny three-wheel truck was designed to negotiate the narrow streets and lanes in cities and villages.

These days, Kim’s Ape putts along the old highway in Jugiong between the Murrumbidgee River and the Hume Highway, heading for a truck stop service station. A slight grin breaks over the owner of this 1981 vehicle.

Kim is entitled to enjoy his moment. He went to extraordinary lengths years earlier negotiating with car dealers, wharfies, the mafia and bureaucracies in two countries to get this squirt of a vehicle into Australia. 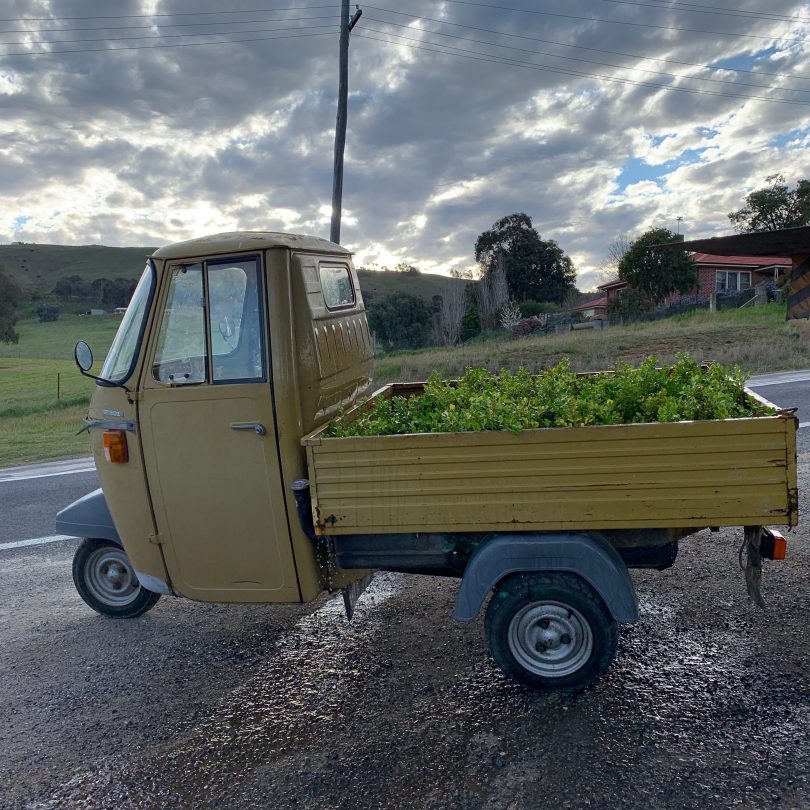 The three-wheel truck stands out in Jugiong.

Aside from being a restauranteur with a following in Perth for 30 years, and now Jugiong, Kim revels in Italian cars. He previously owned a Ferrari and, before that, Vespas.

“My first time in Italy, seeing these little cars putt-putting around, it appealed to my sense of weirdness and passion about things Italian,” he says.

He reckons the Ape will do 40 km/h downhill with a strong wind behind it. On this particular morning in Jugiong, it was much slower. Eventually, the Ape trundled into the truck-stop, where Kim wound down the window, leaned out and, at the top of his voice, called out to a few farmers loading up diesel: “Anyone want to borrow my car for the day for small jobs?”

Most of the farmers smiled, accustomed by now to Kim, whose partner Liz Prater and her daughter Kate Hufton bought the Sir George up the road in 2015. They farmers shake their heads and get on with their work. Except one bloke, who swore emphatically: “That’s not a ute. A ute has four wheels!” 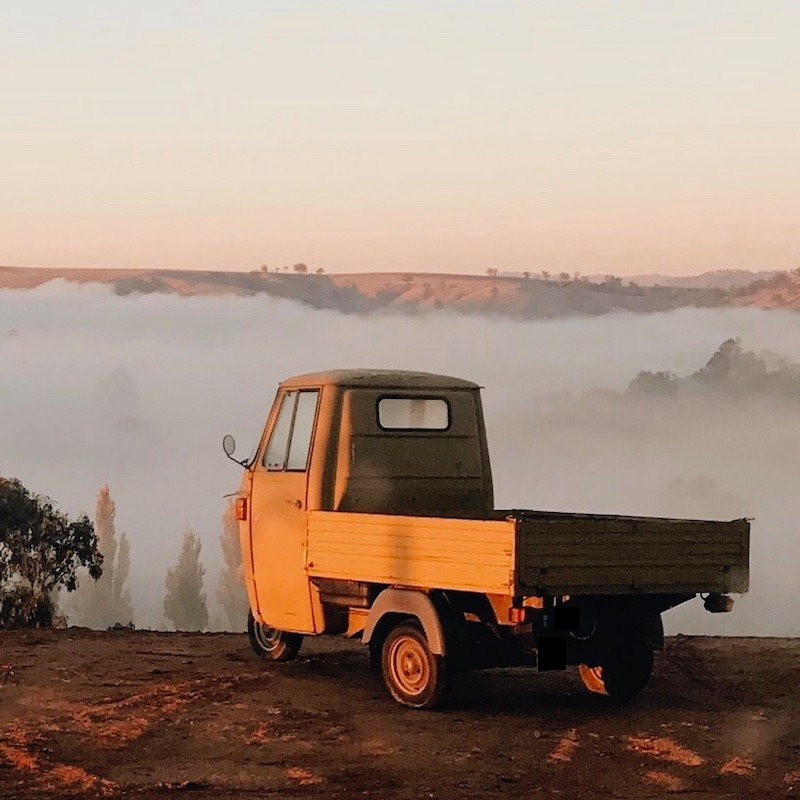 The Ape will do 40 km/h downhill with a strong wind behind it.

That’s the idea of the Ape, to have a little fun. It putts around the back of the Sir George Hotel, entertaining children and their mums and dads.

In Italy, Kim found a dealer in Albenga near Savona and Imperia on the Liguria Coast where these vehicles were lightly used by flower growers.

He applied to bring two Apes into Australia. He returned to Australia only to discover he needed a permit from Rome to export them. “I didn’t pay much for the vehicles, but all the rest of the fees were more than them both,” he says.

He organised an agent to get them loaded at the La Spezia docks and planned to use one container. He ordered lots of wine and oil to pack in the rear of his precious Apes and all around them to maximise the value of his shipping costs.

“The Italian wharf loaders wouldn’t do that,” he says. “I had to pay for two 20-foot containers which added to the cost. Then I found out to get them on to the dock, these types of goods are controlled by the Mafia, who give contracts to particular people.”

When they finally arrived at Fremantle, he paid more fees to get the vehicles out of dock. Kim engaged an Italian mechanic who had looked after his Vespa to modify one of them to comply with Australian licensing standards. He needed to get parts as well.

A year had elapsed before he was ready to get his Ape out on the road, during which time the law had been changed to disallow three-wheel, load-carrying vehicles. He says it was aimed at preventing Apes from entering the country from Asia.

About a decade later a friend told him an Italian engineer who had tried to help him earlier was now specialising in converting cars to qualify for registration. Six months later, one of the vehicles was licensed under a special utility licence.

The Ape is a constant source of amusement.

“It makes people smile. I go down to the truck stop and the truckers just laugh at me,” he says.

I have one here in Canberra! Italian Brothers - Manuka's Fine Foods Destination

David, have you come across this?

Umm no, didn't know they exist. Want one though, not sure what for exactly...

Penny Sergi I don't think it's for sale.

Denise Bourke - 3 hours ago
insurance'll cover that Shirley View
John Killeen - 4 hours ago
At least the new electric fire trucks will always be first on-scene to a battery fire! View
Colin Mitchell - 4 hours ago
Nick Anderson and they don't have service to... View
Opinion 2

Jugiong’s historic The Sir George hotel goes on the market