Six authors vie for 2017 ACT Book of the Year Award 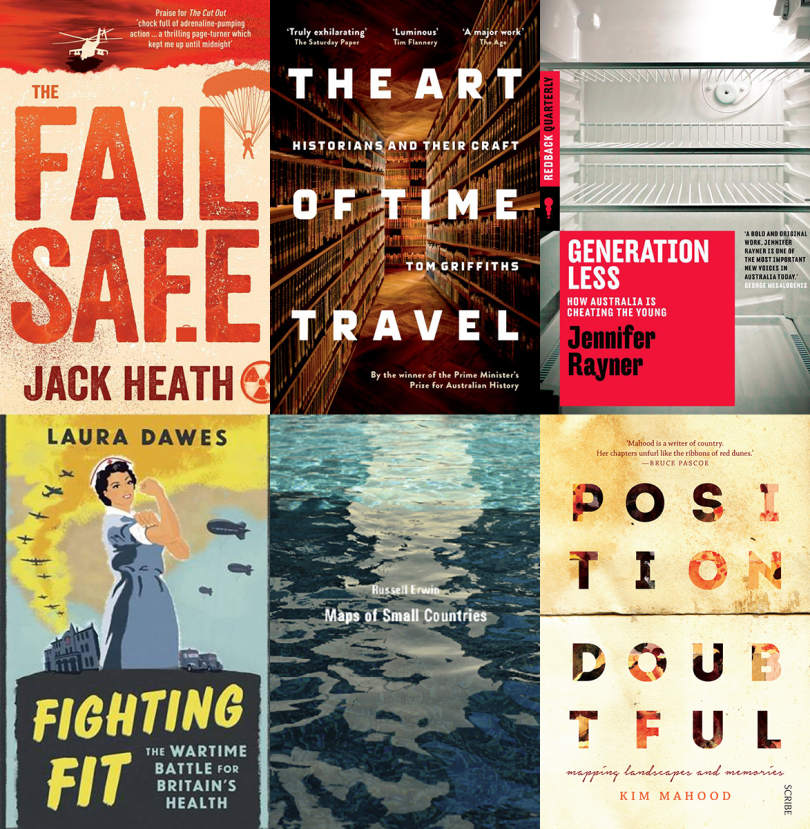 Six authors in the running for 2017 ACT Book of the Year.

Historical works, a volume of poetry, an action thriller for young readers, a desert memoir and a contemporary social critique make up a diverse shortlist for the 2017 ACT Book of the Year, announced on Monday.

Six authors are in the running to win the $10,000 award, which recognises excellence in literature and supports writers based in Canberra.

They are Laura Dawes for her book Fighting Fit, Russell Erwin for Maps of Small Countries, Tom Griffiths for The Art of Time Travel, Jack Heath for The Fail Safe, Kim Mahood for Position Doubtful and Jennifer Rayner for Generation Less.

Minister for the Arts and Community Events Gordon Ramsay said each of the shortlisted books was an excellent example of its genre, with the shortlist ranging across poetry, fiction and non-fiction.

“These books, as well as the other 24 nominations received this year, demonstrates the depth and variety of talent that exists in our local literary community,” Mr Ramsay said.

“I would also like to thank the judges – Maureen Bettle, Frank Bongiorno and Charlotte Harper – for their own contributions to the writing sector and their commitment to reading this year’s entries.”

The ACT Book of the Year Award aims to support the development of ACT-based writers and promote writing in the ACT. It recognises quality contemporary literary works published in the previous calendar year.

The winner will be announced in December.

The shortlisted authors and their works are:

Award-winning writer Dr Laura Dawes specialises in medical history and in this work explores the conundrum that Britain in 1945, despite almost six years of war, was in better health than ever before.

This volume of poetry is memoir and celebration, meditation and exploration, sketches and simple vignette, ranging from a suburban childhood to delicate and joyful pieces welcoming the birth of a granddaughter, from moving elegies for parents, to songs of loss, and poems which have grown from the earth of Erwin’s farming life in the Bannister district near Goulburn.

The Art of Time Travel (Black Inc) by Tom Griffiths

Through portraits of 14 historians, Tom Griffiths, W K Hancock Professor of History at the Australian National University, traces how a body of work is formed out of a life-long dialogue between past evidence and present experience. With meticulous research and glowing prose, he shows how our understanding of the past has evolved, and what this changing history reveals about us. The Art of Time Travel won the 2017 Ernest Scott Prize and was shortlisted for the 2017 NSW Premier’s Literary Awards, 2017 Colin Roderick Award and 2017 CHASS Australia Book Prize.

In this action thriller for young readers, 14-year-old Fero doesn’t know who to trust – the country that turned him into a boy soldier or the one that turned him into a spy – in this chase to stop a nuclear war. The Fail Safe was longlisted for the Children’s Book Council of Australia Book of the Year, Younger Readers 2017. Jack Heath is the internationally bestselling author of The Cut Out and many other action-packed thrillers for young people.

Writer and artist Kim Mahood returns to the Tanami desert country in far north-western Australia where, as a child, she lived with her family on a remote cattle station. The land is timeless, but much has changed: the station has been handed back to its traditional owners; the mining companies have arrived, and Aboriginal art has flourished. Position Doubtful was shortlisted for the 2017 Victorian Premier’s Award for non-fiction and the 2017 Australian Book Industry Award for the Small Publishers’ Adult Book of the Year.

Jennifer Rayner, who holds a Ph.D. from the ANU, asks what future Australia has in this examination of contemporary society where today’s young Australians are the first generation since the Great Depression to be worse off than their parents. Will it be one where young Australians enjoy the same opportunities to build stable, secure lives as their parents and grandparents had? And can we do right by the elderly without making second-class citizens of the young?

For more information on the shortlisted books go here.

Read an inspiring book written by a Canberran recently? Share your experiences with us by commenting below.