Smiley signs coming to a suburb near you 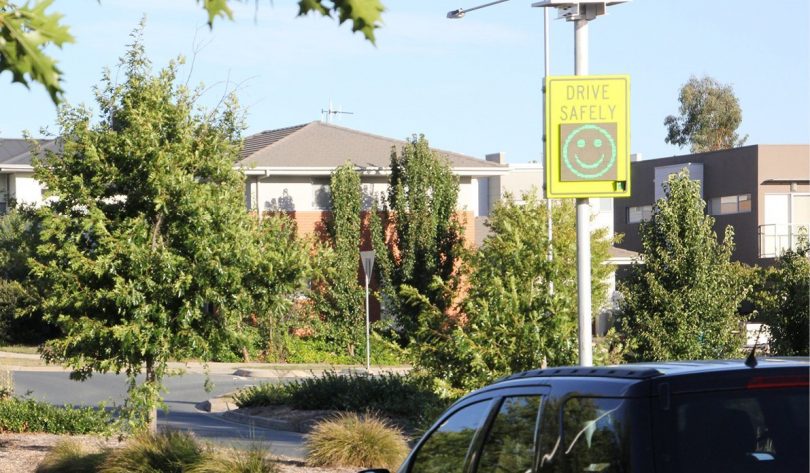 One of the smiley signs in a Canberra suburb. Do the right thing and it lights up a happy face. Photo: Supplied.

Stick to the speed limit and the sign smiles. Put the foot down and it tells you to slow down. The ‘smiley signs’ have been rewarding good driving and hopefully putting a brake on speeding in the ACT’s suburbs over the past year and are now being readied for a new deployment.

Part of a Transport Canberra and City Services trial since February last year, the smiley-faced speed signs, installed with $40,000 in grant funding from the 2016 round of the ACT Road Safety Fund grants program, will be greeting drivers in new sites at the end of January as part of their ongoing evaluation.

A TCCS spokesperson said the signs were introduced on busy residential streets identified as having a known speeding problem and/or the subject of a high number of complaints from residents as a softly, softly approach to changing the behaviour of drivers.

“The signs are not enforcement devices, they are a friendly reminder to motorists to watch their speeds, slow down and drive safely,” the spokesperson said.

The signs, which have an inbuilt radar that measures the speed of an approaching vehicle, had proved successful in other jurisdictions including Queensland and New South Wales.

In the first 12 months, the signs had been rotated through the following locations:

At the end of January they will be relocated to:

The spokesperson said that an evaluation of their effectiveness is expected to be completed by the end of 2019, and followed by a decision on whether any additional ‘smiley face’ signs will be rolled out.

How effective do you think the smiley face signs are in addressing bad behaviour on the roads? Comment below.

That smiley face is not inclusive. There should be a rainbow one.

Some people might think they are silly, but apparently smiley signs work. Cars in front of me on Mugga Way got smiles, and I got a smile. Other places have them too.
https://www.brisbanetimes.com.au/national/queensland/smiling-signs-cut-speeding-in-brisbanes-suburbs-20150722-gihxhd.html
“Speed-detecting signs have dramatically slowed down Brisbane drivers in suburban streets, the city’s deputy mayor said on Wednesday as he announced a doubling of the devices.”

https://www.goldcoastbulletin.com.au/news/traffic-reports/smiley-face-is-the-latest-tool-in-the-citys-arsenal-to-slow-drivers/news-story/99d9d00f6e9b7e4b105638423e6e10e3
“The speed alert signs were rolled out across the city almost four months ago and in that time speeding in 14 hot spots has reduced from 73 per cent to 19 per cent.”

Had one on Springvale Dr last year. Didn’t always work and didn’t change driver behavior as far as I could tell

Not sure how they are powered but They don’t work when it’s been cloudy. I pass one every day and it isn’t working if it’s cloudy. Also why are schools zone speed limits all allay long instead of like NSW where the speed is reduced at the beginning and end of the school day. Get with it.

As ACT Health stumbles and falls, this pathetic government treats us like children with this……says it all

It smiled at me.

They would look good in a man cave.

I am still waiting for the joker face behind than vans, when they catch you speeding…

Bad behaviour? Let’s talk bad behavior, I just followed a driver in blue Hyundai with ACT government plates who were operating their mobile phone while driving. Didn’t notice the green arrow to proceed, after a time I lightly tapped the horn and the driver proceeded to turn. Got to Gundaroo and the driver was still distracted by the phone. Perhaps the ACT government should start by educating their staff.

Did you call the number on the car?