Smith’s Alternative will now be able to attract bigger acts and broaden its offering with the opening of its new 100-seat auditorium.

The city music venue has taken over the lease of the space next door, previously a newsagency, and for the past couple of months has been fitting it out.

It now has a stage, an enormous lighting rig and for the first time, an actual dressing room for performers. The space will also have unimpeded views of acts from anywhere in the room, something regulars to the Alinga Street venue, who had to contend with poles, will no doubt appreciate.

Smith’s owner Nigel McRae said a patron built the 11 metres by three metres steel lighting rig on site with his welder, and it had to be hoisted above the stage.

He said the new space would not only lift Smith’s viability as a venue but enable to it be more versatile, with the 46-seat original bar looking after the regulars who might just want a drink and a chat, but also still able to stage gigs as well, such as small musical acts, poetry and comedy nights, as well as book launches. 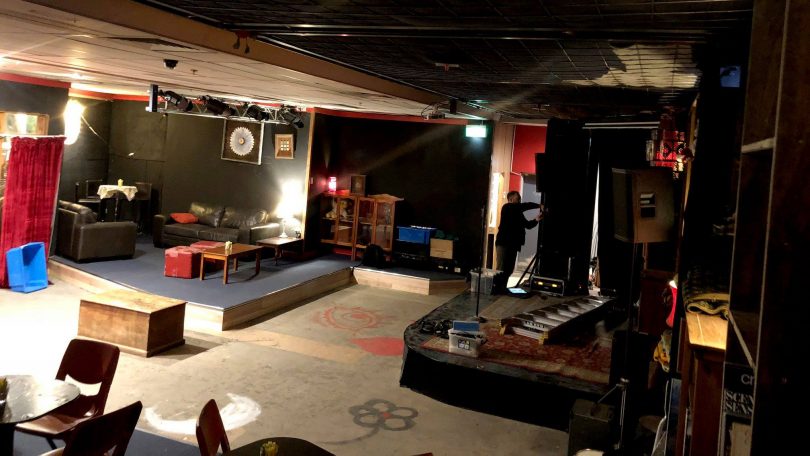 Finishing touches being made to the new gig space at Smith’s Alternative in the city.

“Now with a 100 capacity in the auditorium, we can attract slightly bigger acts, but also it gives us more versatility,” Mr McRae said. “The space is much more usable as a theatrical space, so we’ve already had inquiries from a couple of theatre companies which might want to put on plays there.

“It’s also good for film screenings. We want every form of performing art Canberra has to offer.”

The auditorium – which opened last Thursday night with jazz group the Mark Levers Trio and solo artists Aphir, Arrom and Tim Pearce – should have its liquor licence this week.

Throw in outdoor seating as well and the new Smith’s capacity is now about 200.

Come October, Smith’s Alternative will have been operating under the present management for three years.

For more information about the venue and upcoming gigs go to https://www.smithsalternative.com/

abdul mutawe - 14 minutes ago
Having performed building works for Mrs Liangis over past decades, I have to say she is very astute, capable and fair. And sh... View
News 124

Lyn Kemp - 30 minutes ago
Goodbye Zed, hopefully. You've done absolutely NOTHING for the ACT 😖😖 View
Capital Retro - 4 hours ago
"Climate change, gender equity, citizenship, refugee policy, economic and cultural renewal, and a First Nations Voice to Parl... View
Shane Carter - 4 hours ago
Who-da-thunk-it, the man who’s voted against the ACT having self governance. His seat under threat from the ACT calling him... View
Community 8

bikhet - 31 minutes ago
This seems to be your thing. Never knew the pluviometers were there. Is their output available on the web somewhere? I'm a bi... View
brendan eyers - 2 hours ago
Cool to know what the cubes are, though I've never noticed one. Worth a mention that there are a hundred or so pluviometers a... View
brendan eyers - 2 hours ago
They are called standpipes. Connected to mains water and used to collect water samples for testing. View
News 2

MERC600 - 37 minutes ago
Yep , full marks to the Raven. What I would like to know is what would you pay for a coffee to be delivered by this drone mob... View
Capital Retro - 2 hours ago
The next step is to equip the ravens with lasers. Death to all drones!... View
News 2

Cary Elliot Johnson - 5 hours ago
No, we aren't becoming more complacent, we are becoming more like the rest of the world..... Covid bearing. View
Lifestyle 4