Street art is not graffiti. Street art may have had its origins in graffiti, but graffiti is a different, more rudimentary, animal altogether.

Street art is complex, interesting, challenging. Even a cursory glance at the images contained in this ground-breaking show reveals just how sophisticated it is. Remember John Howard? – he’s here; and Ned Kelly – ditto. And for Christ’s sake He’s included as well. There’s politics, social commentary, fashion. But let’s not mess about here, in some of the works there is a kind of stuff-you nonchalance with respect to what you think, and about what they’ve done, and where it’s going to finish up. But so it goes.

So come see this first-time-in-a-major-gallery exhibition and be inspired by stuff that is not only, yes, ‘beautiful’, but beautifully executed. Stuff that has real muscle, real presence, real content, done by a bunch of urban guerrillas – space-invaders – whose works have not only transformed the walls of their cities but have now breached the walls of our citadels – the galleries themselves. If you want to see some fabulous things, see this exhibition. Read the catalogue, see the work, change your mind. It’s the only one you’ve got. 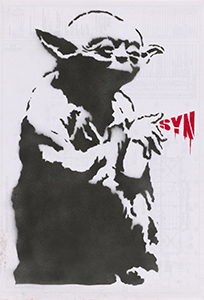 Party at the NGA on opening night – get your tickets now

Come and party at the ‘New Look’ National Gallery of Australia on Friday 29 October for the official opening of the coolest exhibition to ever hit the walls:

Check out the exhibition, meet the artists, chat with the curator and funk it up with some soul filled tunes from DJ Rush… Then party on at the official afterparty at NewActon hosted by exhibition Cultural partners NewActon/Nishi and the Molonglo group.

Transport between the official opening party and the afterparty will be available on the night.

Street art has significantly altered Australian visual culture, especially over the past decade. It has announced the arrival of a new generation of contemporary artists. Playful, edgy, clever and satirical, the works in Space invaders have appeared in city streets around Australia.

This exciting exhibition looks at street art of the past 10 years by more than 40 of the most prolific and infamous street artists working in Australia today. The works are from the Gallery’s growing collection of street art—the only one of its kind in an Australian public gallery. 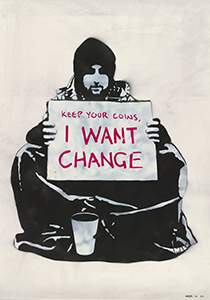 TICKET GIVEAWAY: RiotACT has five double passes to give away to readers. To enter post in the comments your favourite piece of street art, preferably with a link to imagery of the work, before 27 October. The five winners will be chosen at random.

Please make sure your email address in our database (>> my riotact >> edit my profile) is correct so we can get in touch if you win..

And the winners are: Northbourne Ultimatum, Skidbladnir, Bags, Fragge, and Sunshine. Jazz will be in touch with you shortly and if you haven’t heard anything email tim@the-riotact.com

Hmmm, I think the fact the national Gallery of australia has accepted stencils and street art to an exhibition legitimates the activity completely, try telling them its not art.

Can I get clarification on whether I can just bring my guest or if I need to have their name listed also?

Welcome to the world behind the velvet rope! Your name will have x2 or +1 next to it.

Here is a pretty cool one I like from Melbourne. http://www.melbournestreetart.com/stencil/samurai-stencil/ Samurai make everything better.

@homeone, it would be hilarious if they were, and a possibility given that Fosters is available in Chile (as is Coopers, luckily) but I think they’re actually just spent spray paint cans.

do bumper stickers count? the best one was found in oregon, usa – ‘the christian right is neither’…

Seen on a car somewhere in the USA “Support your right to keep and arm bears”.

My favourite piece of street art would have to be by Julian Beever (http://users.skynet.be/J.Beever/pave.htm), of a flowing river/pond done as a perspective piece entirely in chalk (his speciality), the piece is called “Waterfall” and can be found at http://users.skynet.be/J.Beever/images/waterfall.jpg – this entire project (and the others like this) are done using the perspective of the camera as a reference to build up an image that looks surreal when viewed from the right angle.

I also really love his underground cavern, found at http://24.media.tumblr.com/tumblr_kt1y0tBgUH1qzzwmio1_500.jpg

Coming in close at equal second is a collage piece by Shepard Fairey (Obey Propoganda), located at http://dckaleidoscope.files.wordpress.com/2009/05/0072.jpg – I bought a large print version of this for my house, it is absolutely gorgeous :] Shepard works with silk screen printing and collaging to get these patterned effects, though he also uses stencil prints in conjunction with street prints.

Veggie from Santiago, Chile, a simply amazingly detailed stencil, in spite of the photo not doing it much justice.”

@Lagringa, Chile !!
Are those Fosters cans on the ground?

…Regardless, stencilling is no kind of art – street or otherwise.

do bumper stickers count? the best one was found in oregon, usa – ‘the christian right is neither’…

Shrine of the risen Mully – undoubtedly the most artistic

Shep Fairey gets my vote

More seriously, some of the works in Bordeaux, Toulouse & Paris were my favourites. However I don’t have the images online. Consider perhaps: http://www.myspace.com/rooblar

Or just any “Bill Posters is Innocent!”

Definitely rudimentary and very controversial, but I liked it as soon as I saw it sprayed on a wall.

and I disagree with the comment above, there are many stencil artists who spend hours perfecting the stencil and then painstakingly cutting out different layers and carefully placing those layers to create a very detailed stencil, like this one for example:

Veggie from Santiago, Chile, a simply amazingly detailed stencil, in spite of the photo not doing it much justice.

Proper graffiti artists spend hours perfecting their pieces and letter forms, while most of these guys cut up their allegedly ‘thought provoking’ stencils of Chuck Norris or Mr. T at home and spray them up in 5 seconds.. Gimme a break.

Marc Edwards - 3 hours ago
David Field Dickson’s not depressing, not everything needs to be sparkly and new. View
Tim Scully - 4 hours ago
Hmmm. “... two levels of basement car parking.” View
Sally Pinata - 4 hours ago
KinWah Kee is this what you’re talking about? View
Opinion 33

Russell Nankervis - 10 hours ago
I'm going to work. If the date changed I would be a little more keen to party View
Patrick Boucher - 23 hours ago
What happened to the concert being free? Used to be View
Business 17

Kir Rin - 11 hours ago
WHS Act is able to trump Discrimination law in certain circumstances. So presumably it’s possible. View
HiddenDragon - 23 hours ago
A very interesting related legal question will be businesses which promote themselves as "safe" because their staff have been... View
News 16

Leigh Brady - 11 hours ago
The downside of that is that little CBR would be at the small end of any improvements/upgrades - and any decisions made on th... View
News 14

Despina Despina - 22 hours ago
We are so lucky in this country. Yet we have the COVID deniers, and anti vaxers who seem to refuse that COVID exists. Thank y... View
Lance Russell Baker - 23 hours ago
Timothy Bailey Too true. Their bizarre belief that they are the world's shining example of democracy is unbelievable. I could... View
Food & Wine 8

During the 'unprecedented' year we all experienced in Canberra during 2020, lots of new words and emotions entered my vocabulary....
Food & Wine 104

The staff and customers at Jindabyne Bowling Club were surprised to see a brown snake slither up to the bar...
Food & Wine 63

The thought of attending a three-hour class involving a lot of stretching would normally have me running screaming for the...
News 29

Commuters will have to swap some light rail services for buses for two weeks from Sunday as construction of the...
Community 27

@The_RiotACT @The_RiotACT
In the 1990s, no big night out in Canberra was complete without an epic queue for a cab home. Thankfully, those days are long gone https://t.co/dMiTMsRTuf (11 minutes ago)

@The_RiotACT @The_RiotACT
Plans for the milestone mixed-use development have been welcomed as helping to reinvigorate the Phillip business area https://t.co/3ZEpwioL0n (2 hours ago)