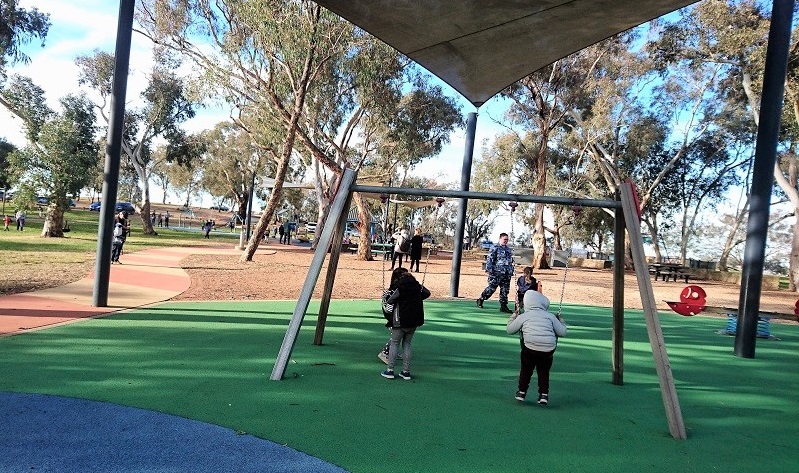 The playful sounds of Black Mountain Peninsula playground were drowned out by a drone being flown at high speed near children. Photo: Brad Watts.

A trip to the playground at the park with your children is normally an enjoyable and peaceful experience.

But this tranquillity and fun recently turned to terror when a space invader from the sky starting whizzing above.
The normally serene and playful sounds of Black Mountain Peninsula playground were drowned out by a whizzing and fizzing from a drone being flown at high speed.

The small, alien-like aircraft was darting between trees and rising and falling within centimetres of the ground with little regard for the dozens of children playing nearby on swings, slides and with balls.

As a concerned parent, I quickly moved my children away from within the frenetic fly-zone and soon the drone attracted the ire of other finger-pointing parents.

“Gee that drone is flying really fast and close to the kids,” said one concerned parent as they looked towards the sky.

Fortunately, there was an ACT Park Ranger – dressed in a dark green uniform – nearby who I spoke to about the airborne intruder being piloted by a man sitting in a deck chair behind his car in the carpark.

“I saw that drone and it seems very close to the playground and kids,” the ranger said. “But unfortunately, in the ACT, I can’t do much about it – I wish I could!”

It is disappointing that there currently are no local laws governing drones flying within metres of children’s playgrounds in public parks and open spaces. 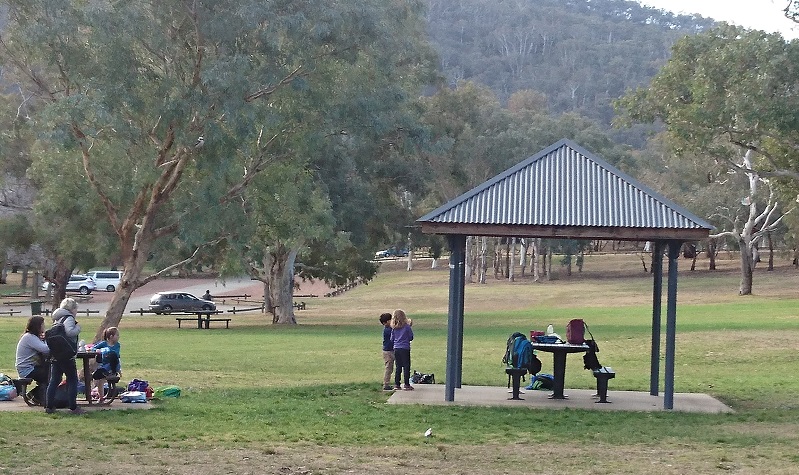 The troublesome drone was being piloted by a man sitting in a deck chair in the public car park. Photo: Brad Watts.

The CASA laws on recreational drone flying include:

According to these strict regulations, the drone and his pilot was clearly breaching national air safety rules, especially flying in a busy recreational area.

While the pilot seemed almost oblivious to others around him, it highlighted the urgent need for better policing of these regulations including at a Territory level.

I agree if people want to fly drones (and at high speed), they can do so in a more private area and follow the safety rules outlined by airline regulators.

However, if someone is going to fly these space invaders in crowded public areas where children are present, there needs to be an urgent crackdown on this dangerous behaviour.

CASA has warned flyers “there might be local council and/or national park laws prohibiting drone flights in certain areas”.

Let’s hope with further education, common sense for others and better policing of regulations, that drone flyers can enjoy their topsy-turvy past-time in a safer environment.

And parents can go back to enjoying watching their children on the peaceful playground.

Do you think there should be local laws introduced about drones flying near children?

Get one of those rifles that just shoots high-pressure compressed air. It'll knock the drone out of the sky

Seriously, why didn’t the concerned parents approach the operator and ask them to desist on public safety grounds? A few annoyed fathers, in my experience, can be quite persuasive when there is anti social behaviour going on in a park or reserve.

What? And risk “drone rage”

As a concerned father, I did think about approaching the drone flyer but I was more concerned about protecting my children’s safety. I agree that if there’s a groundswell of aggrieved parents involved, change and reform normally occurs. Let’s hope we can keep these ‘space invaders’ in check in future?!

It works if someone reports it, then the authorities actually do something about it.

How do you police it though?

So much regulation in the ACT - a cat can't roam in Forde - but a drone operator can be unlicensed amidst concerns of injury, privacy, and risk of entering airspace and bringing down a plane. Does not make sense.

It’s a concern that drones are flying near children. Not only is it dangerous, but it attracts the child’s attention. This drone could have even been filming children. How can we be sure that a drone operator isn’t a sex offender or have *those* kinds of motives?? Drones are a privacy concern especially to children.

You can’t. In much the same way that you can’t be certain that people on their phones also aren’t perverts trying to film your kids. Or that the elderly couple feeding the ducks don’t have sinister motives.

Report to CASA. There are rules!

It’s already illegal to do so. The law states that you cannot operate a drone within 30 meters of other people, and you cannot operate a drone where it would likely cause harm to others should it fail. https://www.rpastraining.com.au/drone-laws/casa/casr-101-uav-drone-legal-or-illegal?device=t&network=g&keyword=drone%20laws&creative267070651408&placement=&gclid=EAIaIQobChMIwsuJhovx2wIVzA0rCh1QQwA8EAAYASAAEgJz__D_BwE

I thought it was as well.

Why do we need to have local laws introduced when there are existing laws that aren’t being enforced now? This man in the deck chair should have been identified (photographed and license recorded by the ranger), and the matter referred to CASA.

“Unfortunately I can’t do anything about it” is complete nonsense, when a simple check of the CASA website indicates that drone violations can be reported to them for further investigation:

From the website “Please provide photographic/video evidence showing the possible safety breach. If this footage does not clearly display the individual operating the drone/RPA, further evidence may be required.”

and: “We take all reports of unsafe drone/RPA operations seriously. Providing sufficient evidence is available, we will investigate the incident further and where appropriate, take enforcement action.”

What’s the point of having additional local laws when there are ALREADY laws in place that can be used (but aren’t).

Greg Myat - 2 minutes ago
Martin Budden Every road will just be one big carpark then. View
Tramcar Trev - 25 minutes ago
$162million for about 1km of light rail does seem excessive. why do they insist on laying the track inn concrete where the tr... View
Sally Greenaway - 26 minutes ago
Steve Manns but that can't be right. It's too expensive even for our rates... View
Lifestyle 37

Lyn Scougall - 9 minutes ago
Margo Bellis you told us that, that’s why we went there 👍 View
Margo Bellis - 30 minutes ago
Lyn....it was far better than Floriade View
Ali McNally - 2 hours ago
Nadine Pickersgill next year! View
Community 7

Grahame Barnett - 18 minutes ago
We "bribe" our magpie gang. We feed them. They don't attack their feeders. View
Karen De Britt - 19 minutes ago
Feed her mealworms, she'll come around 😁 View
News 28

whatwik - 30 minutes ago
Ha, try NSW regional travel. Disappointing yes, but prudent. Some of us do wonder about the obsession with the ACT Chief Mini... View
chewy14 - 2 hours ago
JC, No spin here, just facts. Whatwik claims that others have had to backtrack on their plans. Except none of the other state... View
News 8

Clive John Trenton - 43 minutes ago
Come on people. It was replaced for a very good reason! As an old bridge it was likely costing a fortune to maintain due to i... View
Mitch Carrington - 1 hour ago
Was fun riding over this for some reason Mark Humphrey Wheeler View
Greg Grant - 1 hour ago
About time! View
Community 25

Capital Retro - 46 minutes ago
The Australia Post vans deliver mail to them early in the day so that the postie bike person can use them as a suburban pick... View
News 244

Nanna Lola Apted - 48 minutes ago
Who will look after them and keep them tidy. Who will prune them back when they overhang the roads and block drivers vision. View
Geoff Jones - 1 hour ago
Money could be spent maintaining public spaces and mowing. View
Opinion 31

rspg - 56 minutes ago
Bureaucracy at its worst with no concept of real world realities. When Manuka oval and st Christopher’s can’t be accessed... View
News 25