From the 14th-17th of October, the Canberra Musicians Club and Cardboard Charlie bring you the Speakeasy Fringe Club in Street Two as part of the Street Theatre’s Made in Canberra season. More details after the jump. 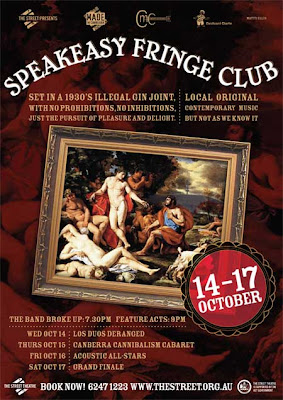 Featuring two shows each night the Speakeasy Fringe Club will kick off the first show from 7pm-8:30pm every night as Matty Ellis returns with The Band Broke Up; in which a guitar is passed around the couch between singer/songwriters, comedians, and actors from some of Canberra’s finest entertainment acts, as they play/recite some of their less frequented material, and fill us in on a bit of the inspiration behind it. Featuring: Adam Hadley (Mr Fibby), Sean Smeaton (Changeable Dan), Cathy Petocz, Jay Sullivan (Comedy in the ACT), Bones (The Trivs), Chanel Cole, Jim Sharrock (Dubba Rukki), James O’Connell (Actor), Johnny Barrington (Super Best Friends) and Sanjiva De Silva.

Each night The Band Broke Up will be followed by our feature shows from 9pm-12am including:

Wed Oct 14th: Los Duos Deranged
We have selected artists from a number of varying acts around town and paired them up with each other to develop a half hour set. The set will consist of two songs from each artist and one song that can be either a collaborative writing effort, or a cover. Our deranged duos include Jeff Thompson (Jason Recliner) with Jacquie Nicole, Jake Lavan (Haunted Attics) with Cathy Petocz, Jonno Zilber with Julia Johnson (Julia and the Deep Sea Sirens), Jo Oppenheimer with Beth Monzo (Dub Dub Goose/Big Score), and Jim Sharrock (Dr Stovepipe/Dubba Rukki) with Ellen Claire (Little Sister).

Thurs Oct 15th: Canberra Cannibalism Cabaret
Rather than eating each other at this event… Canberra artists will show their appreciation for their local brothers/sisters in arms by performing a three-song set with at least one or two delectable local covers as the audience kicks back in style in our Cabaret setting! Featuring: Jason Recliner, Bec Taylor and the Kits, Hashemoto, The James Fahey Trio, Cathy Petocz, Little Sister, The Haunted Attics, and Big Score.

Friday Oct 16th: The All-stars Acoustic Festival
It’s all in the name, a five of Canberra’s All-star acts performing completely unplugged: Featuring Julia and the Deep Sea Sirens, Hashemoto, The Drunk Uncles, Fire on the Hill, and Big Score.

Saturday Oct 17th: The Grand Finale
We’re going out with a bang with one final night of fun and frivolity featuring Jo Oppenheimer, Beth Monzo and Ben Drysdale, The Fuelers, and the Fun Machine and more.

@The_RiotACT @The_RiotACT
Police have released photos of three young men involved in a dangerous vehicle burnout recently, and are calling for witnesses https://t.co/aHs03hxBN1 (27 minutes ago)

@The_RiotACT @The_RiotACT
Thinking of buying or renovating: A blindsided Andrew Barr has taken aim at the one-size-fits all approach of the Federal Government's stimulus package for the housing sector, warning it is too generous and may jack up house prices https://t.co/XgVdOjnX0o (54 minutes ago)