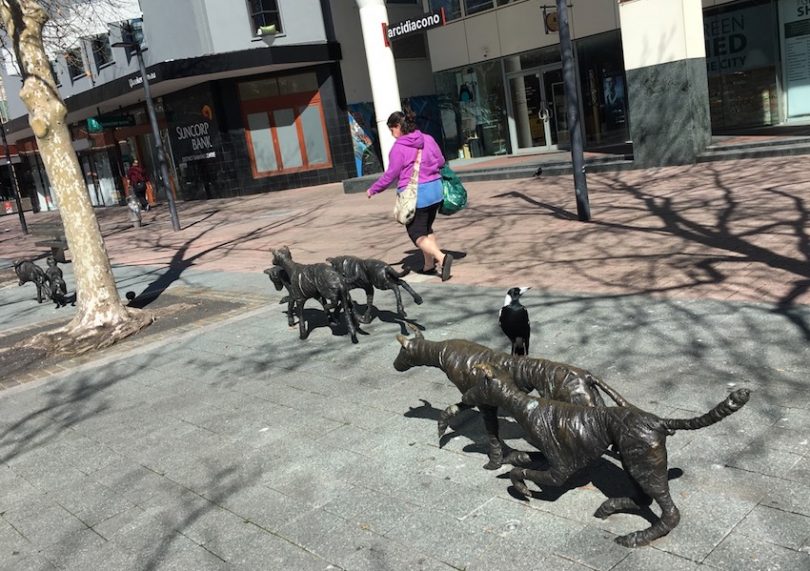 A magpie hitches a ride on the menacing dogs of bush pack (nil tenure) as they race towards the carousel in Civic. Photo: Supplied.

Have you walked along City Walk in the Canberra CBD, just up from the carousel, and noticed a sculpture of a group of seven bronze dogs in three groups, looking a tad thin and wearing bandages?

Created by artist, lecturer and former park ranger Dr Amanda Stuart, the dogs in bush pack (nil tenure) appear menacing as they race towards the children on the carousel.

So what is the back story of the artwork? Why do the dogs look thin and elongated, and why are they wearing bandages?

The concept of this sculpture began when Amanda was a park ranger in Victoria. But first, a little background.

Wild dogs are a big problem for farmers, particularly sheep producers. Wild dog management, just like other feral animal management, and its success in controlling stock and native fauna losses varies throughout Australia.

A ‘nil tenure’ approach is about communities working together to focus on the ‘common problem’ rather than criticising the efforts of adjoining land managers. This builds relationships between private and public land managers.

So back to the story.

One day Amanda, in her park ranger role, came upon some wild dogs that had been killed by hunters, and some had been hung in trees. This made Amanda reflect on how we view dogs, from the joy of good dogs that we know, love and pamper, to the menace of wild dogs – bad dogs that are unwanted and are reviled.

She also reflected on the tensions between wild dogs and humans when humans are adversely affected by the dogs’ bad behaviour, such as when they kill their sheep.

When Amanda found the carcasses, she took measurements and set her artistic skills in train. Some of the carcasses were elongated because of being hung in the trees. She then welded up steel frames and created skeletons based on her measurements.

To hone deeper into the concept of wild dogs and those that are a menace, she asked some of the farmers who had issues with wild dogs for their pyjamas. Of course.

She then tore the pyjamas into long strips and boiled and soaked them for some time with acacia (wattle) seeds. The bandages then took on an earthy taupe colour.

Amanda then wrapped the steel skeletons she had created in the bandages that came from the dyed pyjamas. The fabric of the farmers’ pyjamas is a metaphor of the dog and human being bound together, perhaps as a healing gesture.

It also symbolises the love wrapped around good dogs, with the earthy colour reflecting bad dogs doing what they can to survive.

The sculptures were cast locally in the ANU sculpture workshop foundry.

Amanda was keen to make them look like a ghost pack and bring a ‘sense of danger’ to the bush capital.

Amanda created another nil tenure sculpture in Goulburn in 2017 to bring ‘a sense of danger’ there, too.

I always thought they were mummified dogs. They’ve always been disturbing to me.

I’ve never thought of them
as menacing. I recall hearing the story from Amanda, and it was one of love and respect.

But if the artist was going for menacing, then she failed.

Of course almost any pack of dogs can be menacing, but these don’t come across as unusually so.

However they are still a nice piece of artwork.

Wouldn’t describe them as menacing and ghostly, more funky and interesting

I’ve always loved them. Rather than seeming sinister, I always saw them as full of joy, running with each other, feeling the rush of the wind on their faces. Ghostly, yes, but never scary or discomforting. They are good doggos and deserve pats.

So….. why are they facing the carousel??

Amanda is a great artist and person, glad to have had the chance to meet her

Courtney Page Trevor Deithe ohhh they were looking at the carousel, whoops!!

Be good if there was a plaque nearby explaining this

Emmac Ph the back story

So why do they face the carousel?

Emma Cooper – did you know this back story?

Mel Chae No, I didn’t. Thanks!

Wow! I’ve often walked past them but didn’t give them much thought. it didn’t occur to me, either, that the bandages were pyjamas. Thanks for the explanation. I’ll look at them with different eyes.

Tim, I have no idea why I haven’t shared this with you before, Boof!

So are the Goulburn dogs a replica of the Canberra ones? Or did they get their own unique version?

Costanza Maffi The Goulburn dogs look very similar but there are fewer of them.

Same artist, same story (as mentioned at the end of the article).

Well, I can say that I’d never in a million years have guessed that backstory.

Then there’s the sheep

Luke Ashe these statues remind us that Canberra was built on grazing land and that it is in a rural area.

Margaret Edwards it’s not going to be long, if not already, that the time Canberra has been established is longer than it was used for grazing/rural etc.

Why would a city want something that brings ‘a sense of danger’ to a public space? How interesting

I’d completely missed the threatening aspect of these.

Louise Flood same, although my friend’s German Shepherd dog was always quite startled by them

They remind me of the Doberman in Resident Evil…