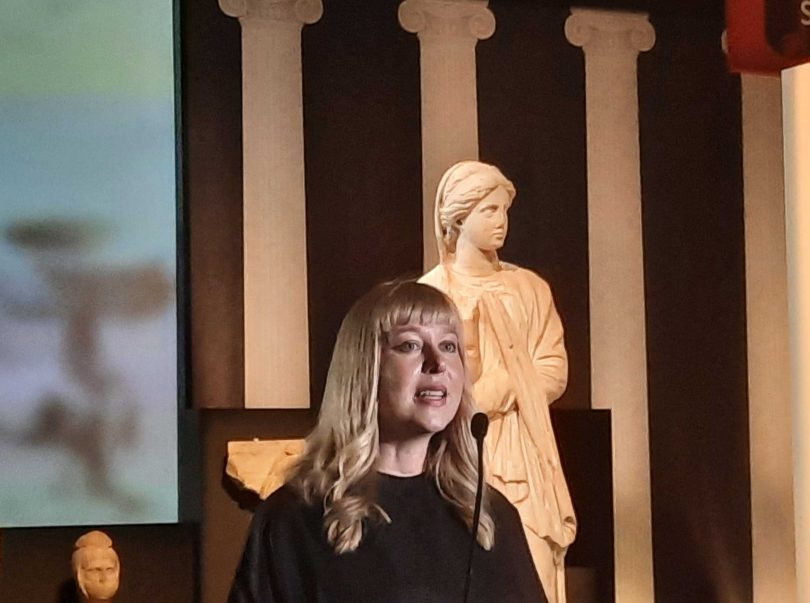 The subtitle to the ‘Ancient Greeks: Athletes, Warriors and Heroes’ blockbuster exhibition now open at the National Museum of Australia suggests women might not get much of look in.

But that notion is soon dispelled upon entering the gallery and meeting Nike, the goddess of victory, and the other female depictions among the 170 items from the British Museum that will be exhibited during a visit to the east coast of Australia.

‘Ancient Greeks: Athletes, Warriors and Heroes’ explores the competitive nature of the Ancient Greek world, and while there are weapons and armour, there are also terracotta sculptures of women playing a game, marble statues of goddesses and women, decorated ceramics and jewellery.

She said as well as depictions of great heroes such as Herakles and Achilles, there are also stories about the great women of antiquity such as Artemisia.

Dr Withycombe said the exhibition gives visitors a glimpse of what it was like to be an Ancient Greek person.

“One of my favourite parts of this exhibition and material culture from the ancient Mediterranean is the red and black figure vases,” she said. “They’re just so richly and vividly detailed.

“They tell these incredibly detailed scenes and present life in ways I’m fascinated by. I learn something new every time I look at them.”

But there is something spinetingling about looking at a set of bronze body armour from 350-300BCE and imagining who wore it and what adventures that warrior had seen.

“One of the things that jumped out at me when I saw it was just how small it is,” said Dr Withycombe.

“It is such a reminder that we were of smaller stature in the ancient world.”

The exhibition stretches across centuries into Roman times, and across the Mediterranean, and includes Roman copies of Greek archetypes such as the discus thrower.

The exhibition is themed along physical exploits, but also communicates the artistic, intellectual and domestic life of the Ancient Greek world. 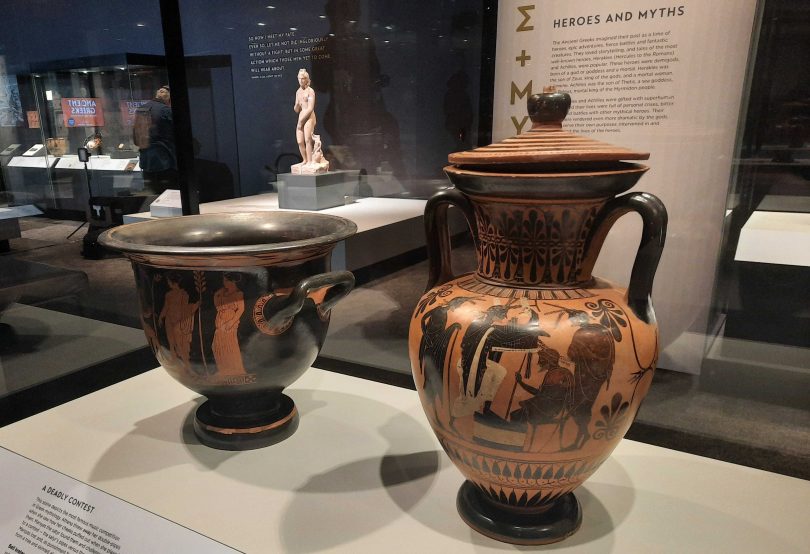 Some of the amphorae at the ‘Ancient Greeks: Athletes, Warriors and Heroes’ exhibition at the National Museum of Australia. Photo: Ian Bushnell.

National Museum of Australia director Dr Mathew Trinca believes it’s also a celebration of the human spirit that Canberra and the nation needs to have after nearly two years of COVID-19 pandemic restrictions.

“The legacy of Ancient Greece endures in our society, and visitors will be mesmerised by the stories of competition in the Ancient Greek world and by the beautiful depictions of athletes, the ceramics, sculptures, armour and jewellery on show,” he said.

The exhibition will be one of the biggest attractions to the ACT of the summer, and a big contributor to local tourism and the economy in general.

ACT Assistant Minister for Economic Development Tara Cheyne acknowledges how important such an exhibition is on several levels.

“It’s going to play such an important role in enhancing our wellbeing and driving community connectedness while also supporting the social and economic recovery of the Canberra region,” she said.

Dr Trinca acknowledges the support of the Greek community in Canberra, including the Hellenic Club for its support in bringing the exhibition to the ACT.

President of the Greek Orthodox Community and Church John Loukadellis said the exhibition evokes memories of childhood stories and prompted him to think about what it would be like to be an Ancient Greek.

“This is a great Nike, not just for Canberra, but for everyone around Australia who loves culture and ancient civilization stories, and is also a friend of history,” he said.

‘Ancient Greeks: Athletes, Warriors and Heroes’ is currently exhibiting at the National Museum of Australia until 1 May, 2022. Tickets are $28. For bookings, visit here.

Alex Ryan - 10 minutes ago
Kris then it wouldn’t be as fun, the 12 month wait every year is what makes Summernats as loose as it is, needs to stay tha... View
Alex Ryan - 26 minutes ago
How bout stop sooking and get away for the time Summernats is on. Or… wear ear muffs View
Jackie White - 37 minutes ago
James Hutchison it does, but rarely in my area, whereas during is Summernats it happens every night. Therefore I will blame S... View
Lifestyle 6

TimboinOz - 2 hours ago
Thanks! I love her blue horizons, I love her azure seas, ..... I miss the 9 Mile Beach (NSW) between Redhead and Swansea chan... View
News 42

TimboinOz - 2 hours ago
We have two large grey-black recycled-plastic worm farms. Much less work than composting, no turning, effectively zero smells... View
Sue Danaher - 3 hours ago
What on earth do people put in their bins? How can they generate so much waste after removing recyclables and food waste. How... View
News 4

Shoppers might be contending with increasingly bare shelves as increasing numbers of workers find themselves in isolation due to COVID-19,...
News 42

I know it’s a generalisation, but many Canberra residents appear to have an uncomfortable relationship with anything to do with...
News 231

Before Christmas, I tried to be optimistic as the country, led by Prime Minister Scott Morrison and his NSW acolyte...
Community 83

@the_riotact @The_RiotACT
Plans are afoot to provide more open space in the #Yass Valley, with calls to activate a section of untouched #riverfront to provide better access for locals, as well as a potential world-class natural tourist attraction https://t.co/fVJUTYDdOl (37 minutes ago)

@the_riotact @The_RiotACT
ACT Health has confirmed the #ACT's 20th death with #COVID-19. The woman in her 80s died at an unnamed residential aged care facility. In the past 24 hours, the ACT has recorded 1860 new cases https://t.co/rTSVLzOeM3 (1 hour ago)