Working together, enriching lives
8 May 2020

8 May 2020 | Dominic Giannini
Start the conversation

ACT Attorney-General Gordon Ramsay has introduced new laws into the Legislative Assembly that would make it a crime to cause financial or psychological harm to a vulnerable person. Photo: Region Media.

Stronger aged care abuse laws which make it a criminal offence to cause financial or psychological harm to a vulnerable person have been labelled as a headline-grabbing stunt with little tangible impact.

The new laws have been described as a “missed opportunity” that will create an “effectively arbitrary offence” by the ACT Law Society, despite the bill being welcomed by the CEO of the Council on the Ageing ACT (COTA ACT), Jenny Mobbs, who told Region Media that it “highlights how unacceptable the abuse of old people is”.

Fines of up to $80,000 or five years’ imprisonment could be imposed on individuals found to be in breach of the Human Rights Act amendments.

While physical abuse and exploitation is already a crime, the new bill would extend the law to render a person criminally responsible if they fail to intervene to protect a vulnerable person.

“Many elderly and disabled community members require support to manage day-to-day tasks and can be particularly vulnerable to physical, psychological and financial abuse,” said Minister Ramsay.

“The safety and dignity of vulnerable people is an absolute priority of the ACT Government. These protections are fundamental to supporting their basic human rights.”

The bill recognises that offences can occur at home, in a private setting, and through an aged care or disability institution, said Minister Ramsay.

But ACT Law Society president Chris Donohue said he was dismayed when the bill was introduced after being assured by the government that it would not head to the Assembly this week.

“The government’s proposals are a poorly thought out response to what is a complex problem,” he said. “The bill will create an effectively arbitrary offence provision that duplicates offences already applying in the ACT.

“It is unacceptable that the government is proceeding with defective legislation that will not achieve its intended objective, and despite advice to the contrary.”

Under the proposed legislation, a vulnerable person would be defined as an adult who either has a disability, or is someone aged 60 or older who has a specific vulnerability in addition to their age.

“This may include illness, disability or social isolation,” said the Attorney-General’s office.

This is a phrase the Law Society takes issue with, prompting ACT Bar Association president Steve Whybrow to accuse the government of headline grabbing.

“The ACT Government is proving it prefers to pass substandard legislation in order to make a headline rather than listening to expert advice,” he said.

The bill introduces duplication, confusion and an “overlapping class of adults over 60 years of age who have specified disorders” from the Disability Services Act, the Bar Association and Law Society said in a joint statement.

“It is not clear what the phrase ‘for any other reason is socially isolated or unable to participate in the life of the person’s community’ means. This phrase is incredibly vague and uncertain in its operation and should not be used to support a criminal charge,” said the statement.

But Ms Mobbs responded to the criticism by saying the bill was a good start and acknowledged that prosecution in this space was already hard and would not be made harder under the new laws.

“It is a good start. Physical abuse is already a crime, but this goes further to cover social and financial abuse.”

The ACT Greens have also thrown their support behind the bill. Their seniors’ spokesperson, Caroline Le Couteur, said she was pleased with the outcome.

“It is good this has been included as a priority during the COVID-19 pandemic as there are many people for who the isolation creates increased vulnerabilities and risks of abuse,” she said.

“I am also pleased the ACT Government has tabled a bill to address the criminal nature of violence, abuse and neglect of vulnerable adults. The fact it is not contained to only people above a certain age, but includes all adults who are vulnerable, ensures adults with a disability are also protected.” 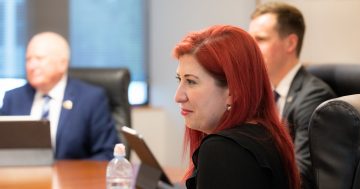