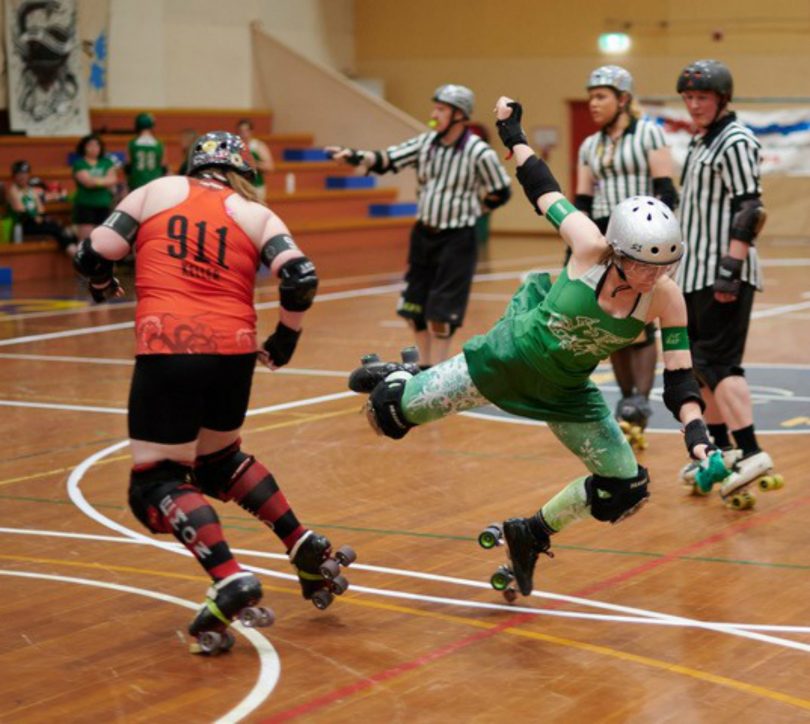 Someone Elsa about to take a fall thanks to blocking by the Red Bellied Black Hearts in the Canberra Roller Derby League Grand Final. Photos: Tim Suess, Black Fortress Labs.

Last year’s first place winners, the Brindabelters, won the bronze against the Black and Blue Belles with a final score of 240 to 179. The playoff for first and second place, between the Red Bellied Black Hearts and the Surly Griffins, saw every player push themselves just that little bit further to try to take home the trophy. Ultimately, the final score of 211 to 182 saw the Surly Griffins win. But with a points gap of just 29 points, it could easily have gone the other way. 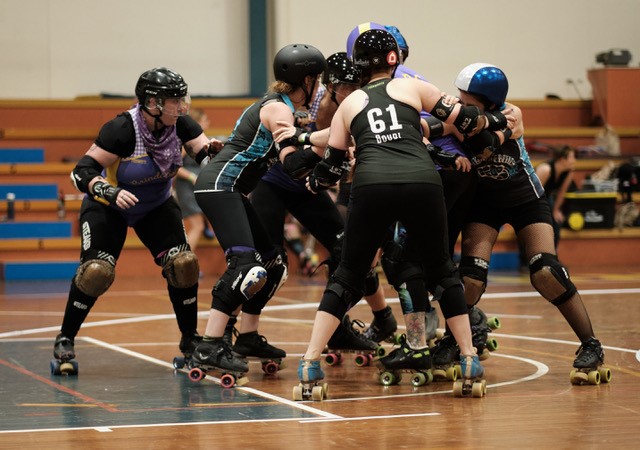 During the first half, the Griffins used the tried and true ‘points and call’ tactics that the Vice City Rollers (Canberra Roller Derby League’s travelling tournament team) are known for. This meant doing their utmost to get lead jammer status, making as many scoring passes as possible before the Black Hearts jammer breaks through the pack, and then calling it off before the Black Hearts could score any points. It was a slow and steady strategy towards controlling the game by maintaining a constant lead.

As often happens in Canberra Roller Derby League games, the Black Hearts upped their offensive play in the second half to try to close the gap. Having finished the first half with a 38 point lead in favour of the Surly Griffins, the Black Hearts were able to narrow the gap to 25 points for a few jams in the second half. A power jam (where the lead jammer is in the penalty bin and therefore can’t score points or call off the jam, making it much easier for the other team’s jammer to score) can easily result in 20 or more points added to a score, so this increased the pressure on both teams to avoid having their jammer penalised.

Apex jumps on the inside line were a spectator-thrilling feature of the game. In her fourth outing as jammer for the Black Hearts in the game, Killie Jean attempted an apex jump that ended in a beautiful rockstar glide across the track on one knee, forcing her to get back behind the pack and push through again. Killie Jean’s willingness to take a chance, speed to chase down the opposition, and strength to push them out made her both a valuable blocker and a skilled jammer throughout the game.

Berries Alive was a crowd favourite as a jammer for the Black Hearts, often lining up against Fast and Furiosa as Surly Griffin’s jammer. Berries Alive showed strength and skill to push through strong green defensive walls in a quarter of her jams. Furiosa lived up to her name, consistently exploding off the jam line at the start. Once off the line, she smashed through the Black Hearts blockers, or showed her agility and balance to take either the inside or outside line on a remarkably thin margin without incurring a cut track penalty. As a result, Furiosa won lead in 71 per cent of the jams she skated, up from 64 per cent in her October game for the Griffins against the Brindabelters. 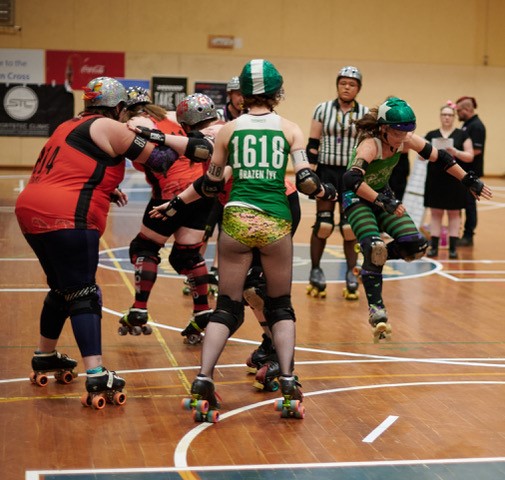 Fast and Furiosa attempts an apex jump during the play-off for first place between the Surly Griffins and Red Bellied Black Hearts at the Canberra Roller Derby League Grand Final.

There was plenty to keep spectators from blinking, with star passes a common occurrence for the Black Hearts. Frequent use of triangle formations by blockers encouraged jammers to look for opportunities to take a chance on an apex jump, although Grim Wraith from the Black Hearts seemed to do well with pure strength, pushing the wall until it disintegrated into a no-pack. In the third last jam, Black Hearts skater Pink Mist was coming in hot on the pack, performed a perfect 180-degree spin to back into the Griffins wall at full speed, and gave it a good solid shove before attempting an apex jump that landed her in the penalty bin. At that late stage in the game, and with a slim points margin, it was worth the risk and gave the stadium crowd something to cheer for.

Thanks for another great year of amazing skills and sporting fun, Canberra Roller Derby League. Looks like speed and consistency are the way to the trophy, so bring on 2020!

If watching the derby isn’t enough, you’ll find all the info on their current Freshies Intake on Facebook, and it’s not too late to ask Santa for roller skates for Christmas!

Olivia Bailey this will be you soon

Christine Cole - 2 hours ago
Yes it is Sharon Merten. Big and long fight. Proud of their resilience and determination. Also proud of making a big decision... View
Tori Hyde - 5 hours ago
So very sorry to see this great place close. Best schnitzels and cutlets around. View
LJ Oan - 6 hours ago
Bryan Doherty not Maccas this time, how sad after how hard the community fought 😞 View
Opinion 27

Mick Andrews - 4 hours ago
It does if your partner is very sick or dies. not all legislation has been updated to reflect de facto as equivalent as a leg... View
Jp Romano - 12 hours ago
Henry Kivimaki amen brother View
News 56

Anthony Beck - 8 hours ago
Why can some training companies continue face to face training, and in a classroom environment, but transport training cannot... View
kenbehrens - 8 hours ago
Roy, I've always been concerned about the active type of exerciser. The runner, the cyclist etc and how that type of activity... View
Kari James - 9 hours ago
I would find this job incredibly difficult and stressful - great work team! View
News 22

chewy14 - 9 hours ago
Yeah, almost none of what you just said is true. The Astra Zeneca vaccine is extremely safe and equally as effective as Pfize... View
skipper - 10 hours ago
Barr only cares about his own political profile, not his citizens. Three states have opened up eligibility to Pfizer for over... View
News 5

realopos - 9 hours ago
Here's a thought. We allow all double vaccinated people their freedom- Now! - only those vaccinated can roam freely? Benefits... View
Business 108

Capital Retro - 10 hours ago
Residents of East O'Malley and Red Hill will enjoy the aroma drifting their way under the inversion layer. View
show more show less
*Results are based on activity within last 7 days

@The_RiotACT @The_RiotACT
Dobinsons is on a roll and bringing their baked goodies to a street near you. Find you how you can get your fix to make lockdown a little sweeter https://t.co/z8IGWiEGyy (8 hours ago)

@The_RiotACT @The_RiotACT
A damning report into the strip search of an Indigenous detainee at the Alexander Maconochie Centre found that the woman's human #rights were violated https://t.co/4p00f0GnbO (10 hours ago)