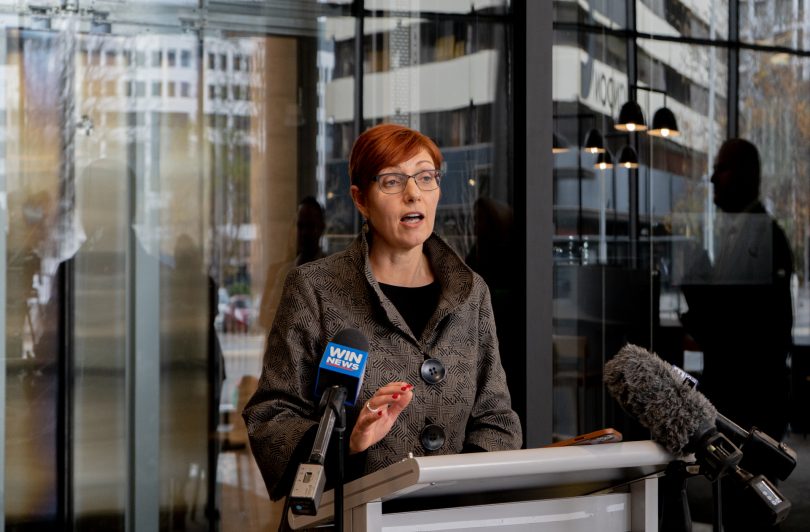 Health Minister Rachel Stephen-Smith said Canberrans should avoid travelling to Sydney unless they absolutely have to. Photo: Dominic Giannini.

Health Minister Rachel Stephen-Smith says Canberrans should avoid travelling to the Greater Sydney region unless they absolutely have to after the Bondi cluster grew by 10 to 21 on Tuesday (22 June).

Eight of the cases reported in today’s figures were already in quarantine and nine have been directly linked to the cluster, but one continues to concern health authorities as they try to figure out how a schoolboy in Sydney’s east was exposed to the virus.

“We know how quickly these clusters can sometimes develop and can have an impact on people when they come back to the ACT, either having to be subject to stay at home or quarantine requirements,” Ms Stephen-Smith said.

“We already have a number of people in quarantine and we would like to avoid people travelling to Sydney, other than if they absolutely need to, and then having to come back and end up having been at an exposure site and going into quarantine.”

There were 136 people quarantining in the ACT after visiting exposure sites as of yesterday.

Ms Stephen-Smith said people who have visited the Greater Sydney region should continue to check exposure locations and fill out an ACT declaration form at www.covid19.act.gov.au if they have visited any exposure site.

However, the ACT will not move to mimic restrictions for people returning from Greater Sydney as it did with stay at home orders for people who returned from Victoria during the last outbreak.

Sydney-siders will need to continue to wear masks indoors and on public transport for another week.

Ms Stephen-Smith said the Chief Health Officer, Dr Kerryn Coleman, will monitor the situation in NSW closely, but no health advice on the matter has been provided to her at this time.

“We will continue to consider appropriate public health directions and measures that might need to be put in place in terms of people who return from Sydney,” Ms Stephen-Smith said.

Meanwhile, vaccination appointments in the ACT continue to fill up after the government announced yesterday that it would open a second Pfizer hub at the airport precinct.

Appointments for the second Pfizer hub, which will be located at 30 Nomad Drive in Pialligo, will commence next Tuesday (29 June).

Appointments at the new centre have been booked up until 1 July. The Garran Pfizer hub is booked out until 21 July with only odd appointments from cancellations popping up earlier.

The ACT is due to receive 7020 Pfizer doses on 28 June before supply increases to 10,530 on 5 July and for at least the following three weeks.

MERC600 - 4 minutes ago
Some Aussie slang is of the rhyming type, but thankfully not all. Like 'me lappys cactus" or ankle biter, and buckleys chance... View
John Moulis - 39 minutes ago
The radio stations in Sydney went crazy with this a few weeks back. It was some of the worst radio I've ever heard. Rhyming s... View
Opinion 42

JC - 32 minutes ago
Think you answered your own question in the last sentence. No 40km/h zone will stop stupidity, but what it will do is reduce... View
Steven Gay - 50 minutes ago
I hoped for a metro with underground passages and facilities. Tokyo metro stations are a world class in itself.... View
Yvon Nemchinov - 1 hour ago
What does that have to do with people being too stupid to safely cross a road? Let alone one with signalled crossings every 1... View
News 4

JC - 36 minutes ago
What nonsense. And this coming from someone who lives in the fat north, probably as far away from Garran as you can get and s... View
54-11 - 2 hours ago
This is a very poor location for a major regional hospital, and successive administrations have allowed ad hoc random develop... View
Community 111

Audrey Gildea - 52 minutes ago
Sophie Gildea good news View
Ruth Fearnside - 2 hours ago
Such a good ending! Thank you for covering this story in the RiotAct. View
Food & Wine 26

Rob Tozer - 6 hours ago
They "patched some on Southern Cross Drive last week. Holes back again this week. West bound on Southern Cross from Coulter D... View
Meegan Ward - 7 hours ago
Pot holes are everywhere.with such a heavy downpour recently it's no wonder. From Gungahlin, Woden, Tuggers too.. View
Shannon Canavan - 8 hours ago
Mary Edmond the 🤬 potholes!!! View
News 3

Canberra's wet winter continues to wreak havoc on the ACT's roads, with crews scrambling to keep up with the number...
Opinion 45

@The_RiotACT @The_RiotACT
Are you going to the #snow this year? Snow cover at high-country resorts is the best in decades, but they're "practically begging" for visitors https://t.co/jbTMXb78OI (14 minutes ago)

@The_RiotACT @The_RiotACT
Canberra Liberals MLA @markparton has apologised for posting a TikTok video showing him adjourning the Assembly and then eating KFC https://t.co/uEwrhlV8zL (1 hour ago)