Syrian Govt set to default on land in O’Malley 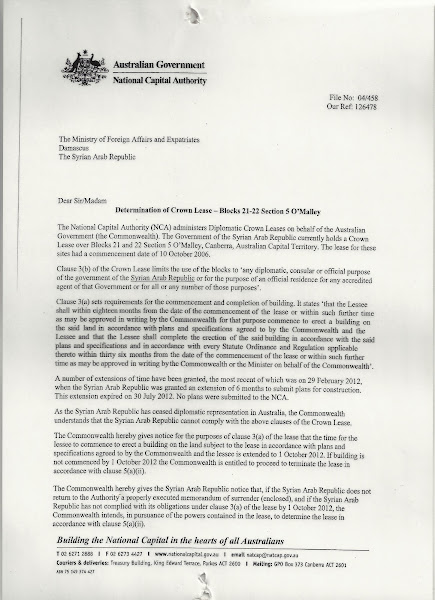 The Syrian Govt has until 1 October to start work on its land in O’Malley or the National Capital Authority will take it back.  It’s a prime piece of land at the top of Culgoa Circuit in O’Malley.

The Syrians acquired the land in 2006 but were granted several extensions of time to start work – the latest was in February this year – but perhaps they had other things on their mind.

A notice was posted on the land this week (photo attached).  Not that there is anyone from the Syrian Embassy left in Canberra to read it, they were kicked out of Australia in May

The land is a favourite spot for kangaroos to shelter and soak up the morning sun – I bet they’re happy!

Davidand Moira Symons - 1 hour ago
Not sure how this happened. I was just scrolling through when i thought 'hang on that's my photo' haha. Moira View
News 75

Fiona Dickson - 2 hours ago
Damian Lomax I’m sure you’re aware there are down sides to those fuels as well. They are not renewable resources - come b... View
Damian Lomax - 6 hours ago
Fiona Dickson just as a side note for you, the cars actually run on green fuels. Almost every car at Summernats that actually... View
News 93