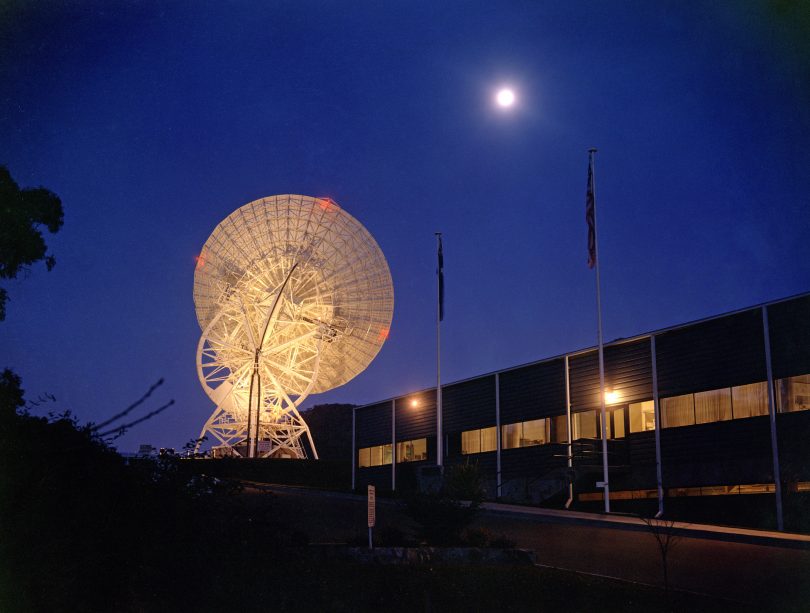 Canberra played a huge role in the 1969 moon landing, and the other Apollo space missions. Displays, talks, tours and exhibitions are popping up all over Canberra to commemorate the days when Canberra’s space trackers monitored the astronauts and provided the vital communications connection between the Apollo astronauts and NASA in Houston.

In fact, that historic moment on 20 July when Neil Armstrong stepped onto the moon, his footsteps were beamed to the world and watched by 650 million people direct from the ACT for the first nine minutes of the broadcast.

“Well, of course, it was 21 July in Canberra,” John Saxon tells me. As Operations Supervisor at the ACT Honeysuckle Creek Tracking station throughout the Apollo Missions, he remembers it well.

The moon landing and that famous ‘giant step for mankind’ took place at 8 pm on 20 July in the US, but it was just after lunch the next day in Australia, at 12:56 pm Canberra time on 21 July. 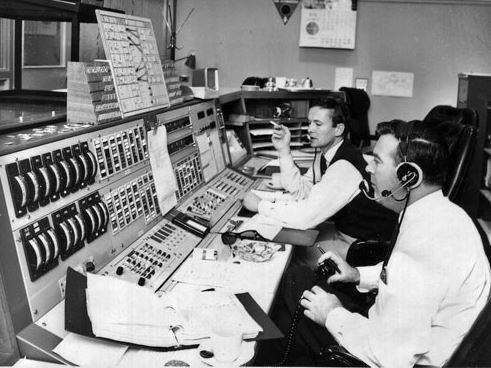 To provide continuous coverage of the moon, and the ability to communicate with their astronauts at all times, NASA needed three tracking stations spaced around the Earth. The three ‘prime site’ stations with 26-metre dish antennas were set up at Goldstone in California, Madrid in Spain, and Honeysuckle Creek in the ACT.

Honeysuckle Creek Tracking station (or HSK in NASA parlance) was built in what is now Namadgi national park, ideal for its quiet location and clear, starry skies. In those days computers were huge reel-to-reel monsters, with lights and switches for the operators to flick.

“Computer techs had to make real decisions, and be experts in their craft, nothing was automated as it is today,” Mike Dinn, Deputy Director at Honeysuckle Creek recalled at a recent event. 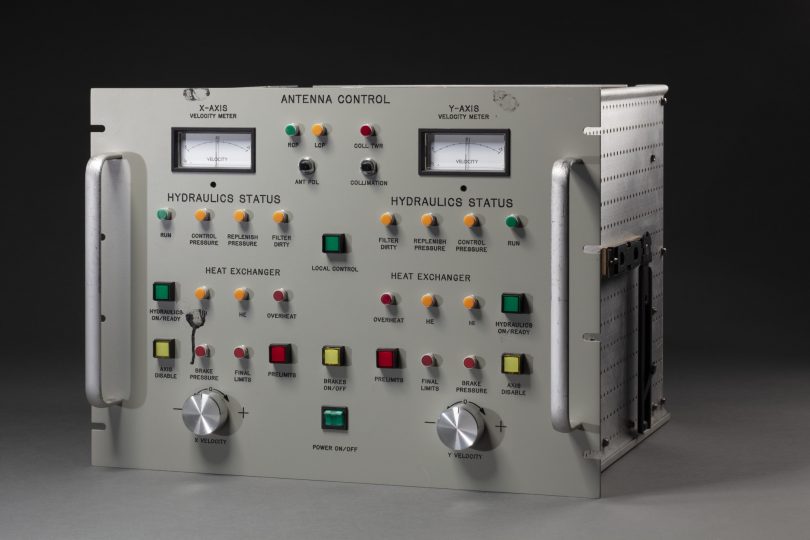 Sadly, the Honeysuckle Creek station where the Canberra space trackers worked was closed in 1981. It was eventually dismantled, being too far out of town to protect from vandals. But it is available as a campsite, and the concrete footings remain.

The dish used for communications between NASA and the astronauts on all the Apollo missions was moved to the Canberra Space Centre at Tidbinbilla. The Space Centre is the perfect place to start if you want to explore Canberra’s space history. 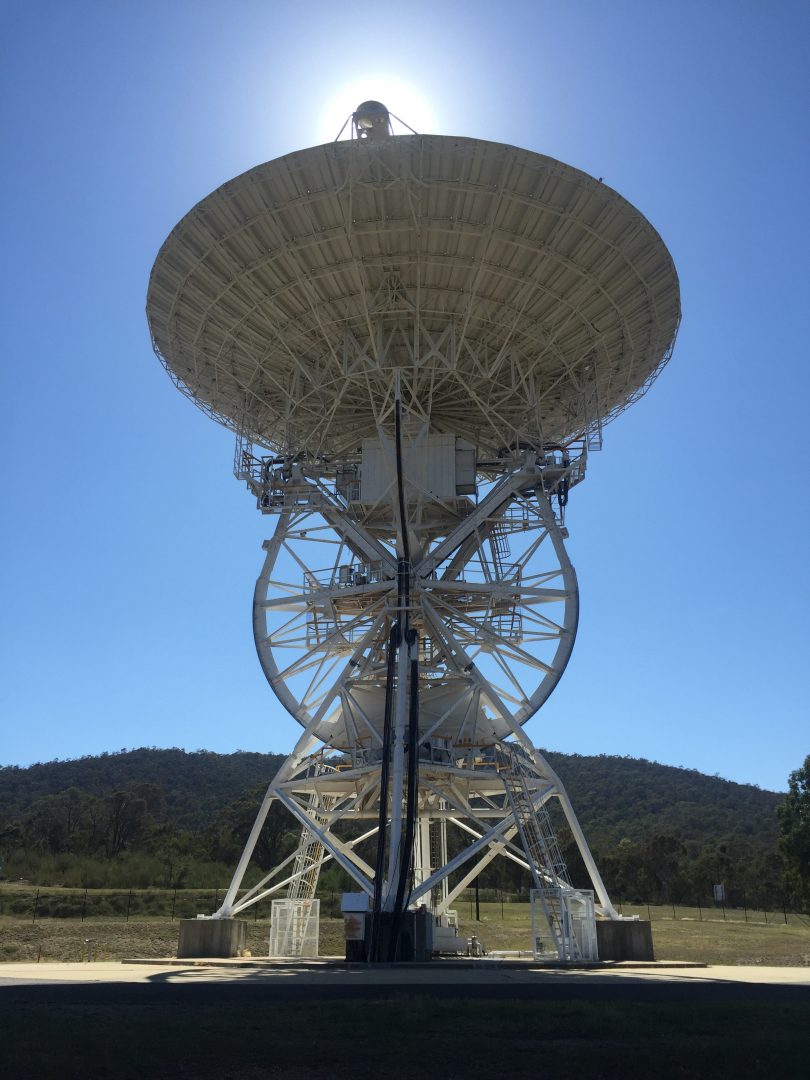 The 26-metre dish used to track the Apollo missions is now located at Canberra Space Centre at Tidbinbilla. Photo: CSIRO. 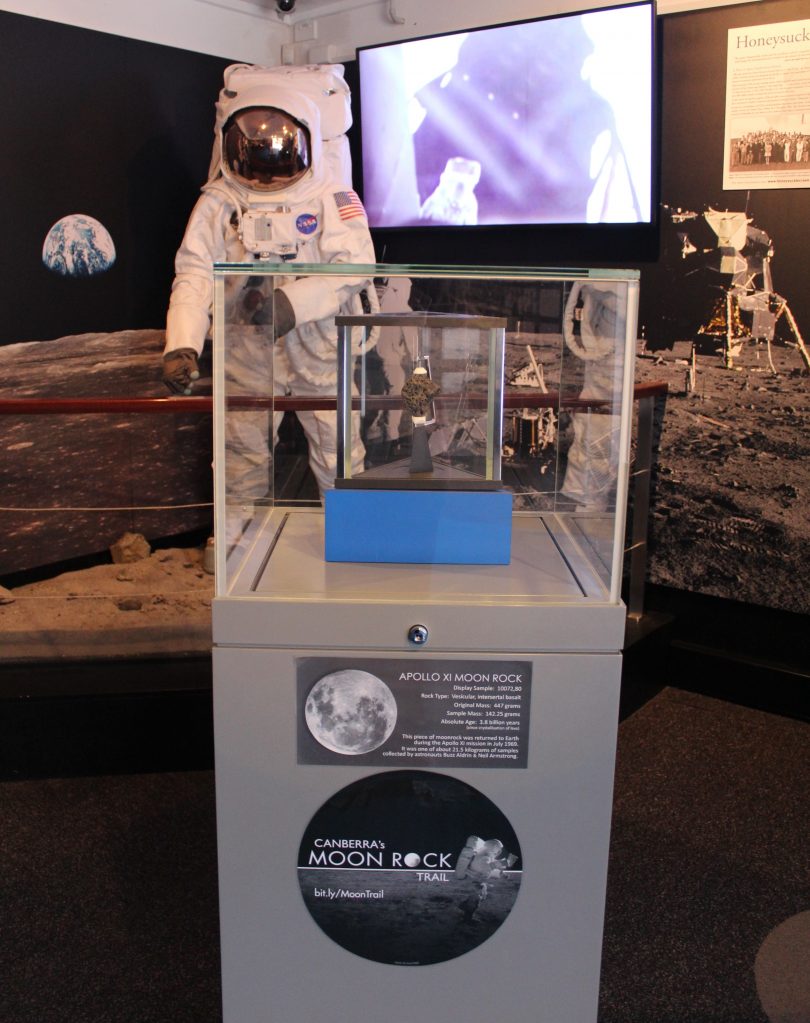 Tidbinbilla is also home to the largest moon rock in the Southern Hemisphere, moon landing memorabilia like space suits and flown space hardware, as well as videos, models and displays on the solar system and space travel.

If you don’t get as far as Tidbinbilla, there is one important NASA relic sitting in plain sight in the middle of Canberra, you have probably driven past it many times. The little Deakin Telephone Exchange building on Kent Street behind Deakin High was purpose built as a NASA Communications Switching Centre in 1965.

This was the central point for control of all communications between Australia and NASA centres, including Houston, for the Apollo program. Neil Armstrong’s famous words from the moon were sent directly from Honeysuckle Creek to Deakin, and then transmitted to the world.

This isn’t a public building so you can’t go inside, but the outside looks much as it would have in 1969. 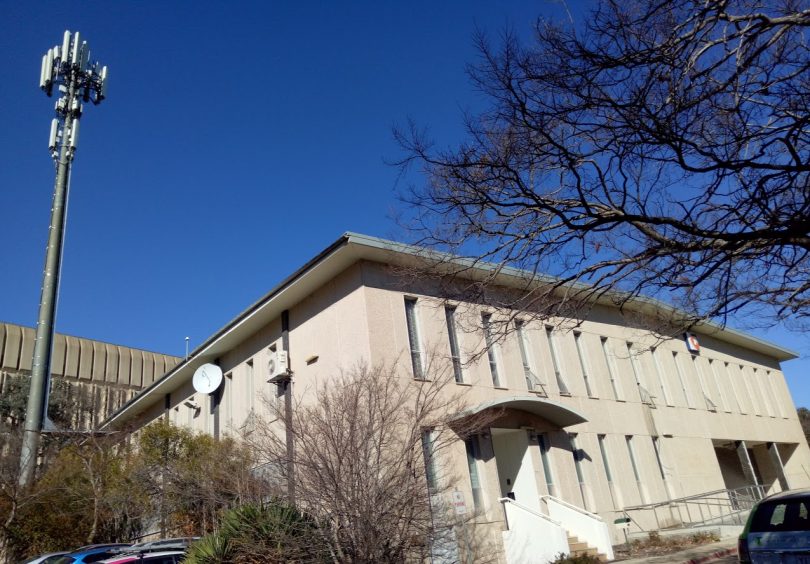 To celebrate Canberra’s vital role in the Moon Landing a plaque will be presented to the Telephone Exchange building, and a range of other exhibitions and displays have been set up. 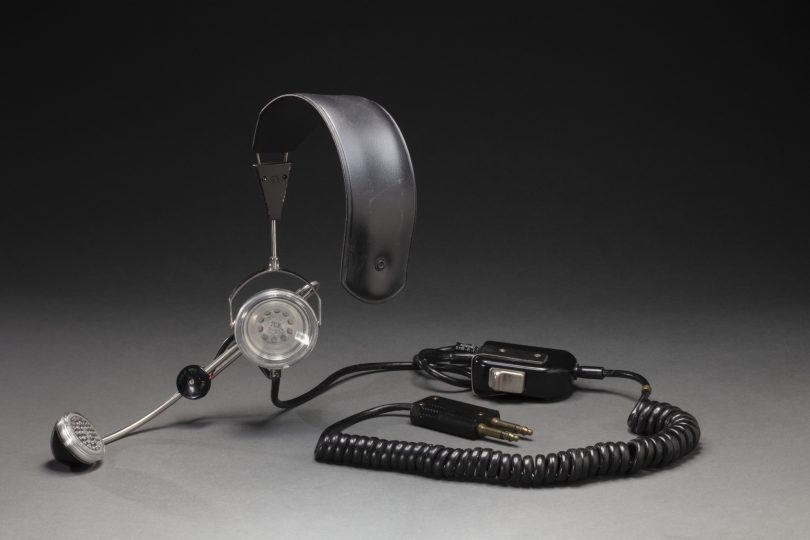 Mount Stromlo has a moon rock, as well as a sculpture of the moon that you can actually walk on – just like Neil Armstrong! Geoscience Australia has a lunar touchstone available (a moon rock you can touch) thanks to a loan from NASA.

A display in the Questacon foyer has fragments of moon rock brought back from the Apollo 11 mission, and an Australian flag that the NASA crew took with them on their historic 1.5million-kilometre journey into space.

There is also a large Questacon exhibition space devoted to the moon – including a giant 7-metre moon model using detailed NASA imagery of the lunar surface. It has over 30000 craters, and pinpoints where the Apollo missions landed. This one is up in the exhibition galleries so you’ll need to buy a ticket. 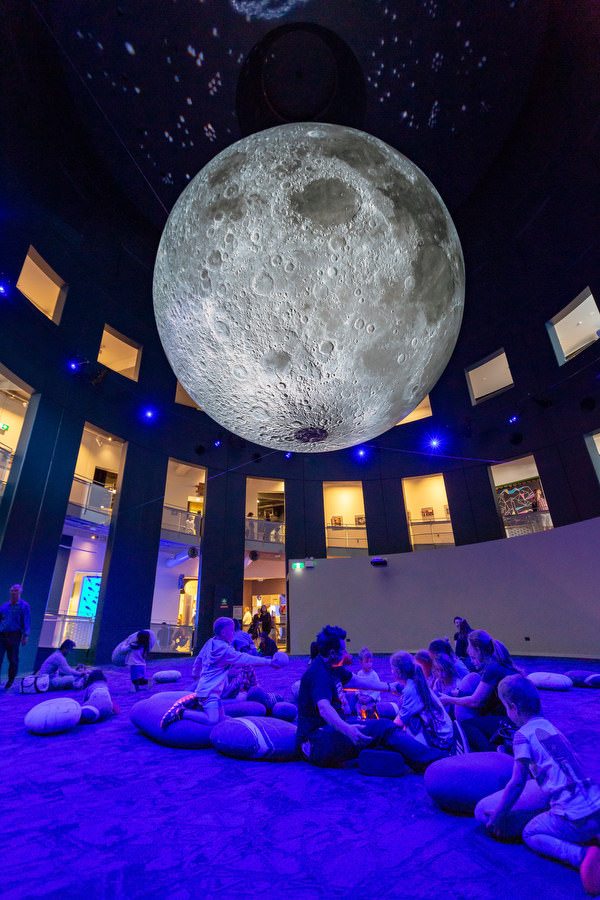 a night under the moon, perfect for the whole family. Photo: Questacon.

For a different take on the moon landing, the Art School exhibition Promised the Moon, has local sculptors, printmakers and photographers responding to the moon exploration theme. Local space trackers Mike Dinn, John Saxon, Bryan Sullivan and others are captured in portraits alongside technical drawings and circuit boards. Artist Tom Buckland has set up an old wooden TV to evoke the sixties era, complete with a plate of iced vovos – just don’t eat one by mistake, it’s all part of the art! 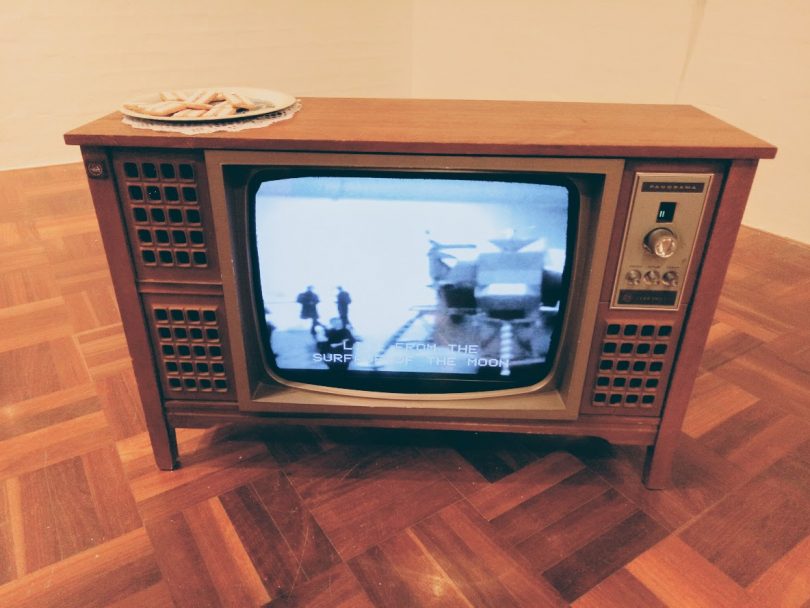 But what about the parkes dish tho?

And you can touch a lunar touchstone at Geoscience Australia

As wonderful as the Movie "The Dish" was, it was NOT the first place to show man walking on the moon! Read on...

chewy14 - 15 minutes ago
"Inevitably, some of us will slip into past behaviours, and others are forced to call it out and gently point out the rules t... View
Opinion 11

Rollersk8r1 - 26 minutes ago
Quite happy as a GWS member. In normal times it’s an ideal arrangement. Four games a year at Manuka (1 pre-season), plus AF... View
Ben Jones - 2 hours ago
No one will go apart from the die hard fans. Until they start winning and the whole of the ACT become fans overnight. View
Opinion 197

David John Hourigan - 30 minutes ago
John Slow too many round abouts...! View
Matthew Robinson - 10 hours ago
Would be great but no way the government would support it. View
Opinion 20

@The_RiotACT @The_RiotACT
After 40-odd days of #lockdown, the novelty has worn off and many of us are struggling to maintain the lockdown behaviours we were once diligent about. Zoya Patel asks, are we becoming too complacent about the #COVID rules as lockdown progresses? https://t.co/ilgv6BzSgO (49 minutes ago)