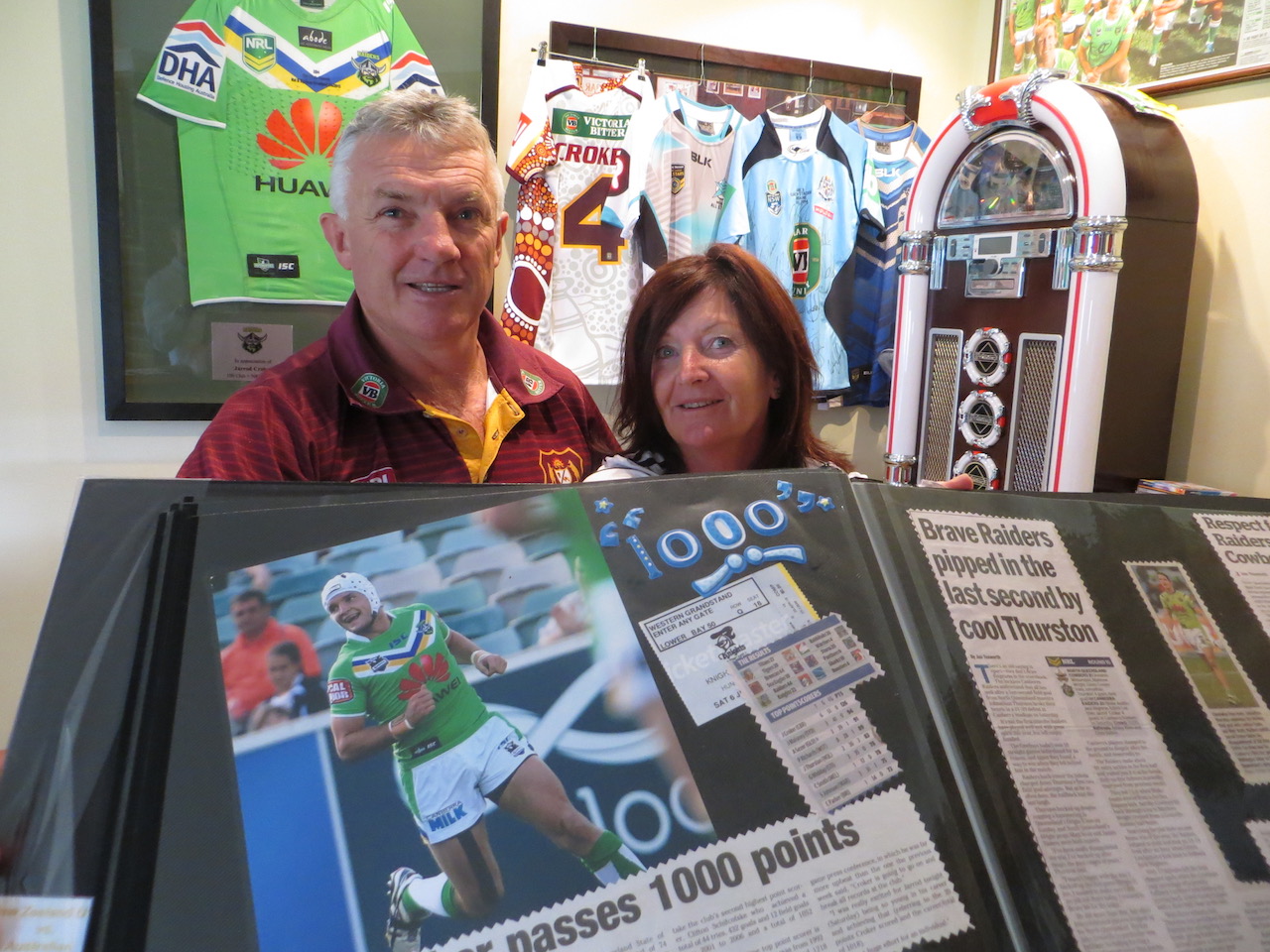 As narrow and unlucky as that first up loss against the Cowboys in Townsville was, fans will abandon the Canberra Raiders unless they win and win often.

Unfair? You bet. Get over it. That’s the National Rugby League.

Looking for consistency? He didn’t even play. He has a busted knee.

Of the qualities Jarrod Croker brings to the game, consistency stands above the others, the lightning backline speed, the record-breaking points scorer and the young, cool-headed captain.

Consistency propelled him into the top grade in the first place. As a kid growing up in Goulburn most of Jarrod’s spare time was spent at a nearby soccer field kicking a footy. Sometimes an older boy Todd Carney would come along for a kick too.

“After school there would be homework to do but he would be over there kicking the footy,’’ his father Greg Croker says.

“After we moved out here (out of town) you would go to training at North Park or the (Workers) Arena and you would wait an extra half hour for him to do the extra kicking and that sort of thing. But he did it all in his own time really.’’

Consistency became embedded. These days, except for a text message before each game – “Enjoy it” – his father, who played a season with the Raiders under 21s, offers no advice.

“To be honest since he has been playing first grade I have never tried to give him any tips,” Mr Croker says. “I’ve thought, you have done a lot better than me, why would I try giving you tips?”

As for Jarrod’s mother Pauline, she has heard so much thoughtless commentary from the sidelines, her expectations of fans are well measured.

Quietly spoken, she can’t sit still at the game. She walks away from the negative noise in the stands. Except one day. It became too much when foul-mouthed abuse from a man directly behind her was relentless.

“He kept going and going. His wife was telling him, ‘be quiet’, ‘be quiet’. I just turned around and said, ‘That’s my son you are talking about’. After that he had a fight with his wife and took off.’’

Mrs Croker believes the best preparation for her son’s captaincy role was growing up with his older sisters, Natalie and Naomie, who kept him level headed. “They used to think Jarrod got everything, that he was the love child and all that sort of thing,’’ she said. “I used to buy him special little treats, like biscuity things, and they would crush them up on him, torment him that way. He wouldn’t eat them after they were crushed up. This was when he was 6 or so.’’

He was in first grade at age 18. A year later rugby league’s huge audience bore down on him, while he lined up a penalty kick in 2010 against West Tigers. In front of a record 26,000 people, he could have forced extra time and perhaps victory. His kick missed.

His parents’ hearts went out to him.

“Mate, bad luck, you can’t change it, but you will learn from it,’’ Mr Croker said to him in the sheds afterwards. “He’s over it,’’ his father says today. “He’s kicked a fair few since,’’ he says in a massive under-statement.

Media glare intensified last year as the Raiders won 10 games in succession. “The captaincy hasn’t changed his demeanour or attitude at all, if anything it has made blokes like Todd (Carney) sit up and think, ‘Geez, look what I have missed out on’, he could have been in the same position,’’ Mr Croker says.

“They all feel the same pressure together, that’s why Ricky (Stuart) picked him as captain I suppose. He knew he could handle it.”

Many pundits wonder why Croker is not a State-of-Origin regular, a mystery that deepened last year after legendary coach Wayne Bennett, who coached him in the All Stars game said: “If I was a NSW selector he’d be the first guy I’d be picking in the centres for them. I love him. I love what he brings.”

Mr Croker admits that in the Raiders’ dark past his son’s representative career would have been more certain with a higher profile club.

“I think now they (Raiders) are on the rise, what Ricky has done with them up there, built them up to be a really good team, there’s a chance he will get there (State-of-Origin). Whether he gets in there depends on form, injury and other players I guess. I have talked to fringe coaches and they just shake their head and say how the hell he hasn’t been in there for the last two or three years, I don’t know. I just hope he gets that chance, instead of looking at the goals and tries he scores, I hope he gets that chance to play good rep footy.’’

In this game, consistency is the best weapon against fickle fate.

Caption: Greg and Pauline Croker with a scrapbook of some of Jarrod’s Croker’s achievements. Photo: John Thistleton.

Jose Vega - 5 minutes ago
Because they think they can get more votes as per Trump and his extreme right wing mates in the USA. Just that no other reaso... View
Lifestyle 6

Capital Retro - 1 hour ago
You are still in denial that renewables are where they are solely because of massive subsidies. At the rate coal fired power... View
chewy14 - 2 hours ago
Capital Retro, I agree, we need to remove the significant level of subsidies received by fossil fuels.... View
News 10

Tom Dale - 2 hours ago
As the APS "permanent staffing" model is still essentially based on the Northcote-Trevelyan Report of 1854 which re-organised... View
Vladimir Svoboda - 2 hours ago
CPSU has been advocating for greater homogenisation across pay bands for a decade and it was Labor policy at the last electio... View
Laurel Haskell - 3 hours ago
People leave the PS and start up their own industry because they KNOW the System..Consultants, Employment Industries, Care In... View
News 150

Raymond Evans - 2 hours ago
Canberra was so much better off when we were part of the federal government , since our local government started everything h... View
Anthony Fernance - 3 hours ago
If it’s only 2 weeks behind then they need to improve the mowing schedule a lot because grass don’t grow 4ft high in 2 we... View
Garry Dodds - 4 hours ago
When the Federal Government were in charge before self Government the lawns were great now it's touch and go..Only in the Sub... View
News 6

JC - 3 hours ago
No it so sure about your statement that longer travel times don’t bring more passengers. In the act we already have an exam... View
Capital Retro - 4 hours ago
Well, the future generations will be paying for it so it's the ACT Labor/Green government's legacy to them. And it's very muc... View
thatsnotmyname - 4 hours ago
Great to see this project finally underway. Very much needed and will be great for future generations.... View
Community 3

Tom Worthington - 5 hours ago
If grassroots community issues are important, then some of the current sitting time could be devoted to them. But having one... View
show more show less
*Results are based on activity within last 7 days

With rain comes growth - and while no one would argue this is a bad thing, many agree it is...
Opinion 127

@the_riotact @The_RiotACT
New details shed light on what police allege happened during a dramatic #prisonbreak in July when a car was rammed in broad daylight as jail staff were transporting a #detainee to hospital https://t.co/c8KUV2DWZN (1 hour ago)

@the_riotact @The_RiotACT
#DFAT's capability and role has been degraded, says Penny Wong. See what Labor has in store for Australia's foreign service if elected https://t.co/4Mycvggqp3 (2 hours ago)