"The answers are there. We've just got to listen to them": Climate rally calls for action as parliament begins for 2020 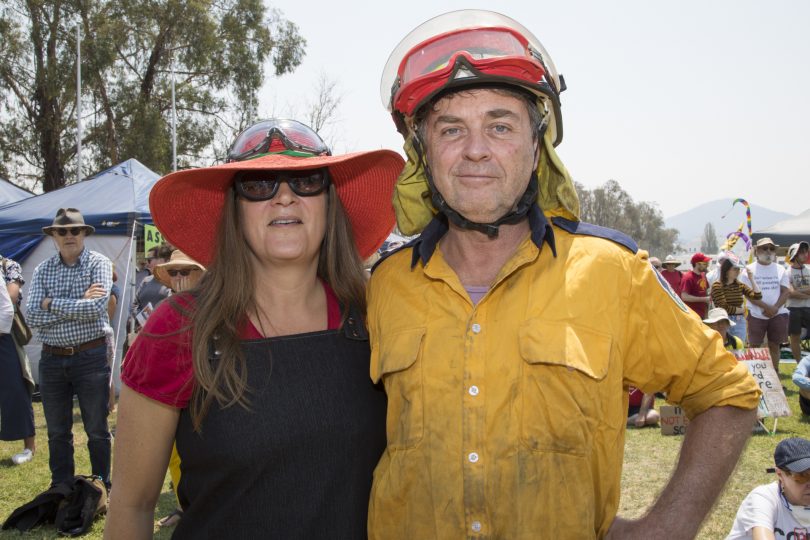 “Take more notice of Indigenous knowledge of how to run this country because it’s been successful for tens of thousands of years,” said Mongarlowe RFS firefighter Paul Huntingford during the Climate Emergency Rally, organised by the People’s Climate Assembly on the lawns of Parliament House.

The rally is part of five days of climate action coinciding with the first day of Parliament, where politicians devoted the day to bushfire tributes and commemoration.

Outside on the lawns, Mr Huntingford spoke as an individual who has been fighting bushfires for the past seven weeks.

“We’ve cut down 85 per cent of all forests. They absorb carbon and we’ve kept building factories that create carbon. At what point is the science not relevant?”

Mr Huntingford was one of many protestors Region Media spoke with, from politicians and scientists to Indigenous elders and ordinary people who are deeply concerned about the way the climate has changed.

Adrian Burragubba is the leader of Wangan Jagalingou Family Council, at the forefront of efforts to stop the Adani Carmichael mine in Queensland.

“All Australians are suffering because of climate change so we want to be able to not only speak for our people but speak for the land and protect the land from further destruction of the environment.

Scientist and radio personality Dr Karl Kruszelnicki hosted the rally. He told Region Media that 30 years of inaction on climate science can no longer be tolerated.

“My position on climate change began in 1976 when the world’s largest insurance company was already factoring the greenhouse effect into its insurance premiums. The scientists had their proof by 1989 and the proof has just become more and more robust since then.

“There have been episodes of climate change before but this particular one is caused by us and by our use of carbon dioxide.”

As an individual, Dr Karl said he makes a daily contribution to reducing his carbon footprint by relying on the “beautiful solar cells” that he first started using in 2007. They cost him $50,000 but are worth about $4000 today.

“The reason I spent $50,000 is that I knew there would be economies of scale, so for every doubling of the number of solar cells being made, the price came down by 10-15 per cent. So I went in there deliberately knowing that I would be an early adopter of this wonderful technology,” he said.

Canberra resident Alice, who didn’t want to give her surname, was one of the thousands with a clear message to politicians in light of the bushfire crisis.

“There are too many who have been told it’s too late to leave, too many people trapped and not taken care of,” Alice said. “I work in science so my position hasn’t changed just because of the events of this summer but it’s a whole different thing when you’re breathing it in.

“I’m also an educator, so I use my role to educate young people to have better methods that help our environment,” said Alice, who mitigates her footprint by not buying plastic and eating only organically produced meat.

David Boden and Julie Robinson of Hackett were dressed for the occasion: Mr Boden sporting a Hawaiian shirt and a sign with a special message for the Prime Minister that said, “This pineapple would make a better PM.”

“My clear message is to stop climate change with long-term emissions reductions for the planet, animals, the lot. I resolve to make a stronger personal commitment, not just as an individual,” he said.

Luke Corby of Wollongong is about to begin a university degree in Canberra. He said politicians need to stop looking out for their own interests.

“They’re here to represent the people and they are taking millions of dollars from people who are denying climate science. It’s the big companies against my generation, who are going to have to clean this all up,” Mr Corby said.

As Aboriginal elder Uncle Bruce Shillingsworth spoke passionately on stage, former Liberal Party leader from 1990 to 1994 John Hewson had a very direct message to the politicians.

“I could be crude and say get off your arse. I cannot believe they have squandered all those opportunities to lead on this debate for the last 30 years,” Mr Hewson said.

“I would like to see a conscience vote in the parliament. It’s about time we flushed out all the senators and members, and find out where they really stand on this issue. The current government is more interested in holding up lumps of coal in parliament than solving problems.”

Wiradjuri woman and ACT Australian of the Year, Katrina Fanning, said it’s time to forget about party politics and get on with saving the planet.

“Aboriginal people, in particular, have been able to manage this place for tens of thousands of years. The answers are there. We’ve just got to listen to them,” Ms Fanning said. 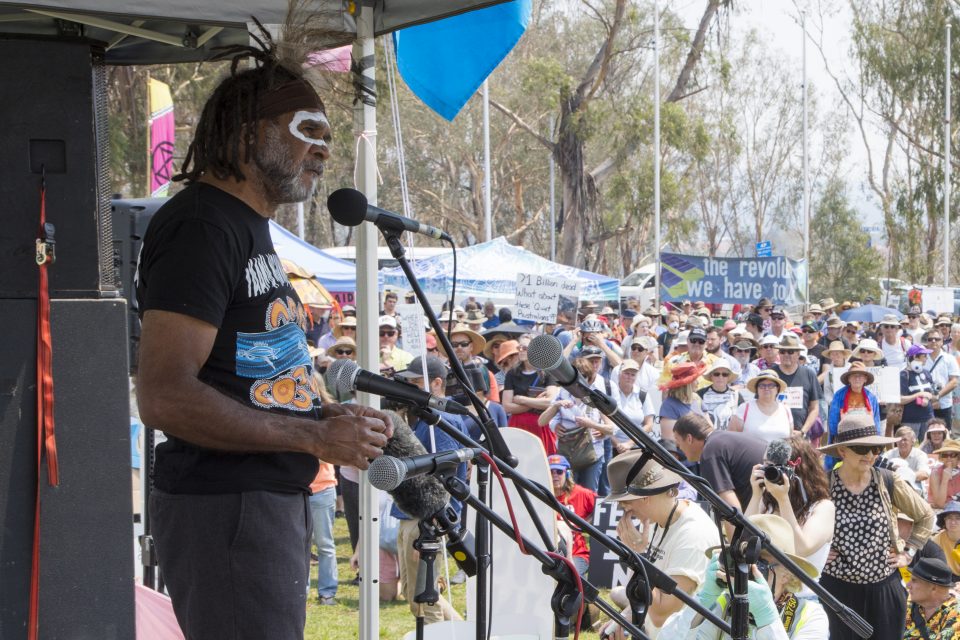 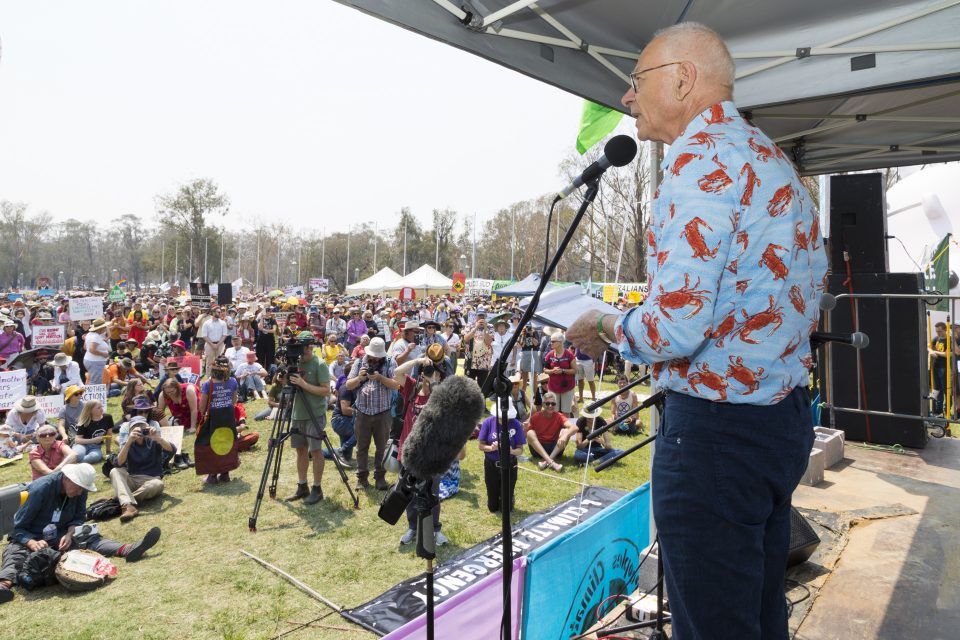 Dr Karl Kruszelnicki during the Climate Emergency Rally at Parliament House on Tuesday. 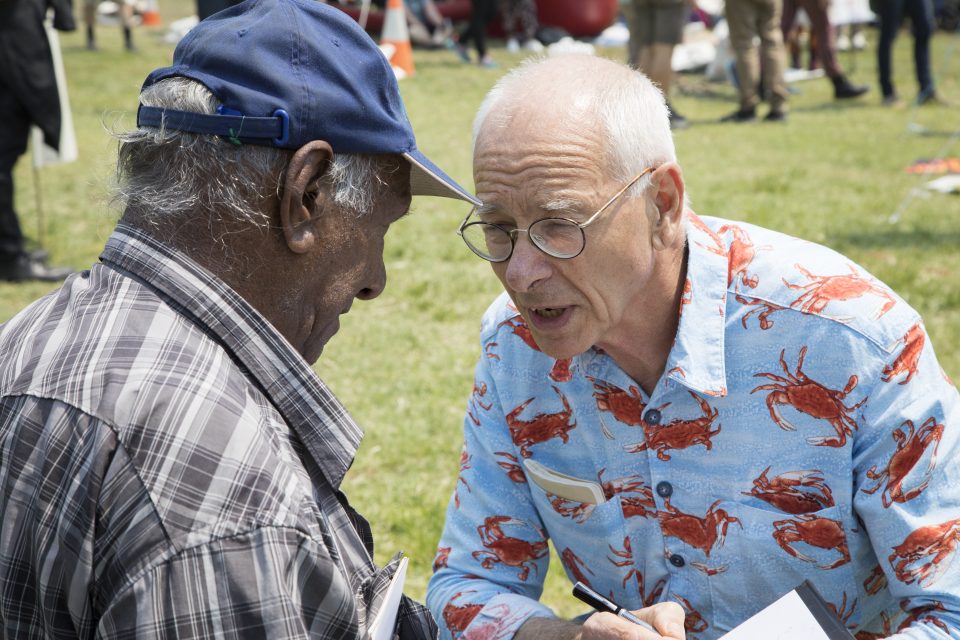 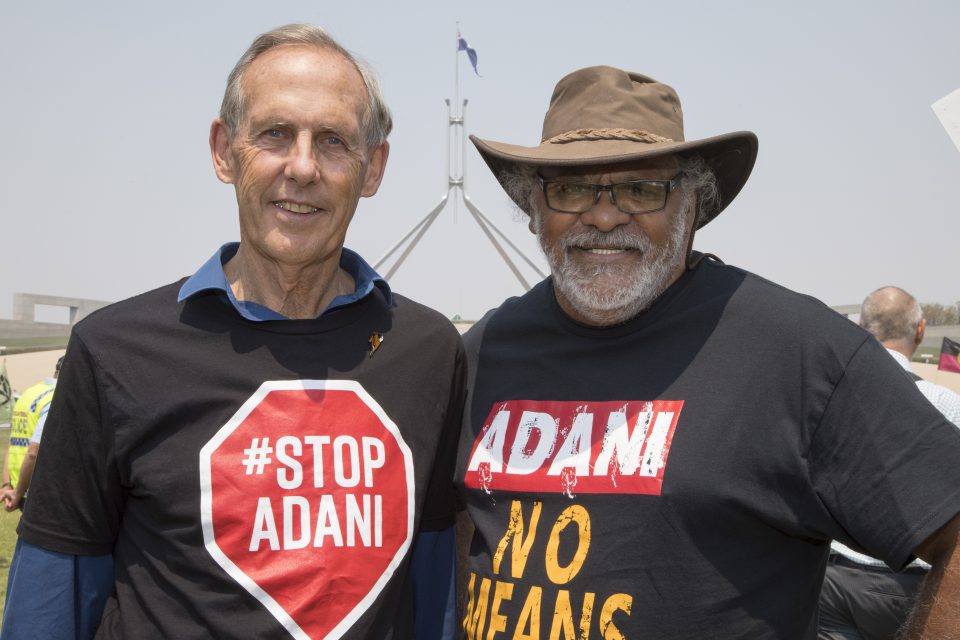 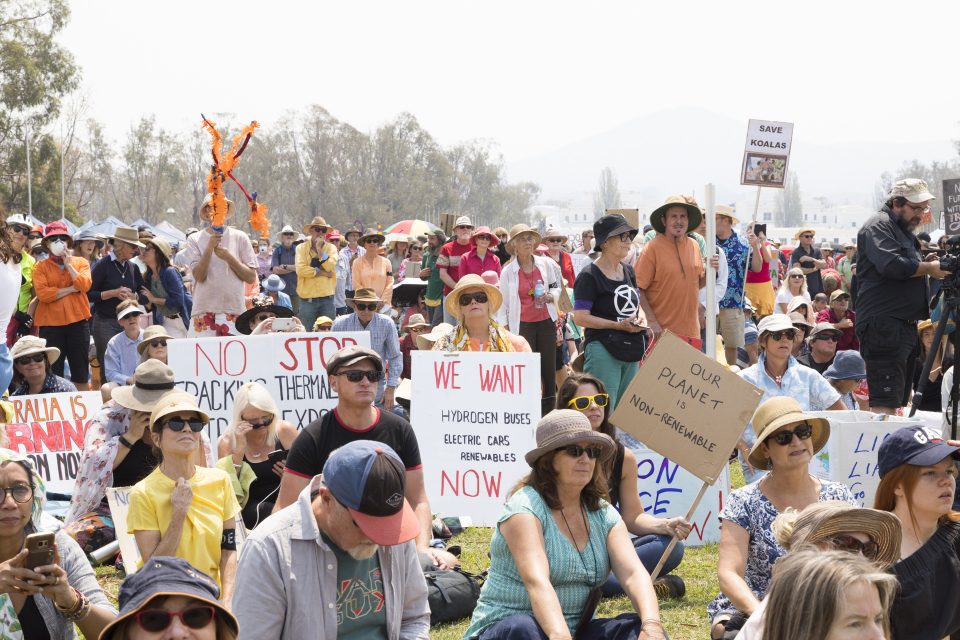 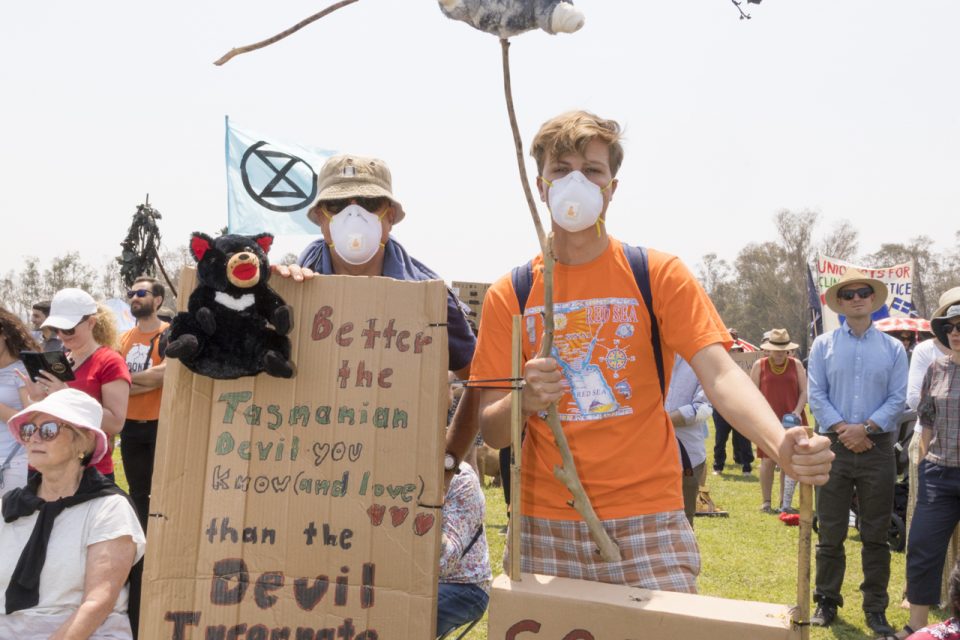 Rob and Luke Corby of Wollongong. 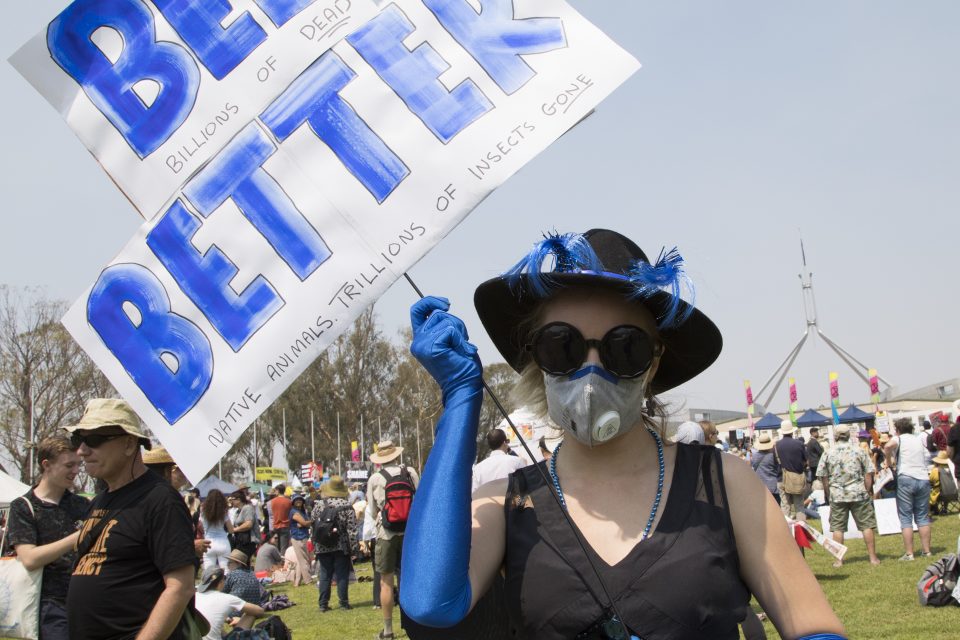 Alice from Canberra is a science educator. 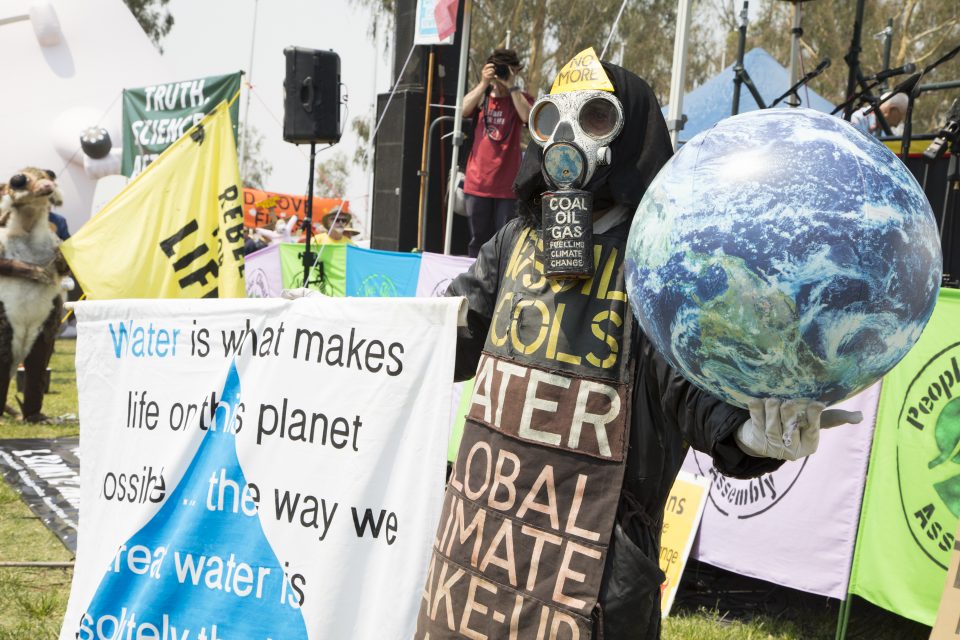 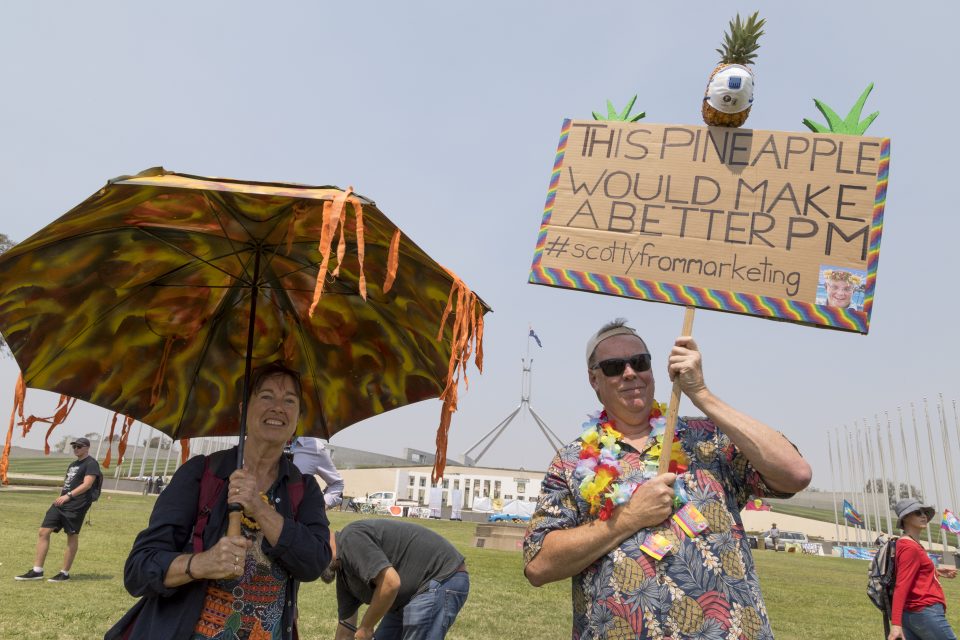 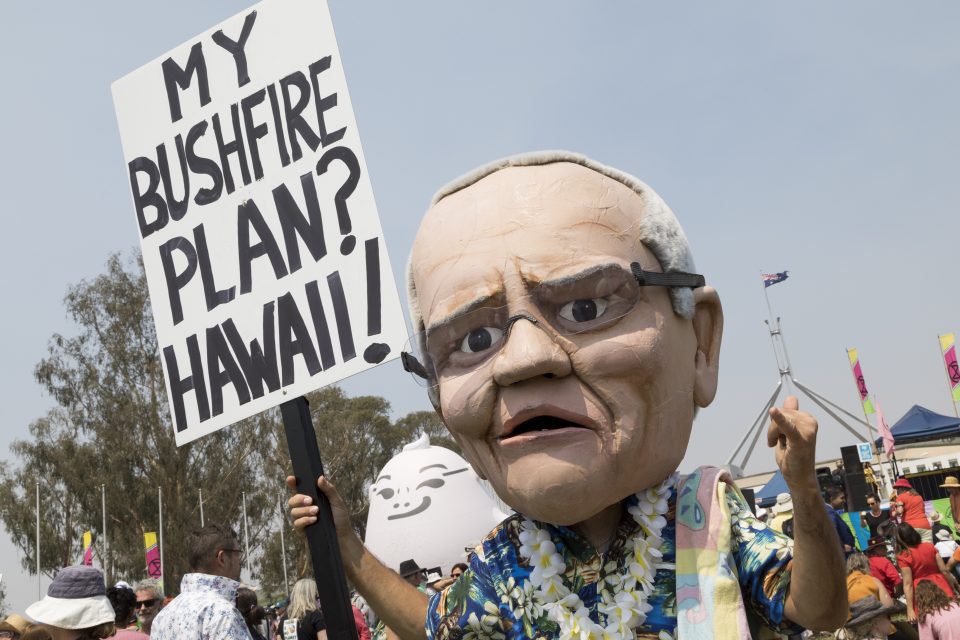 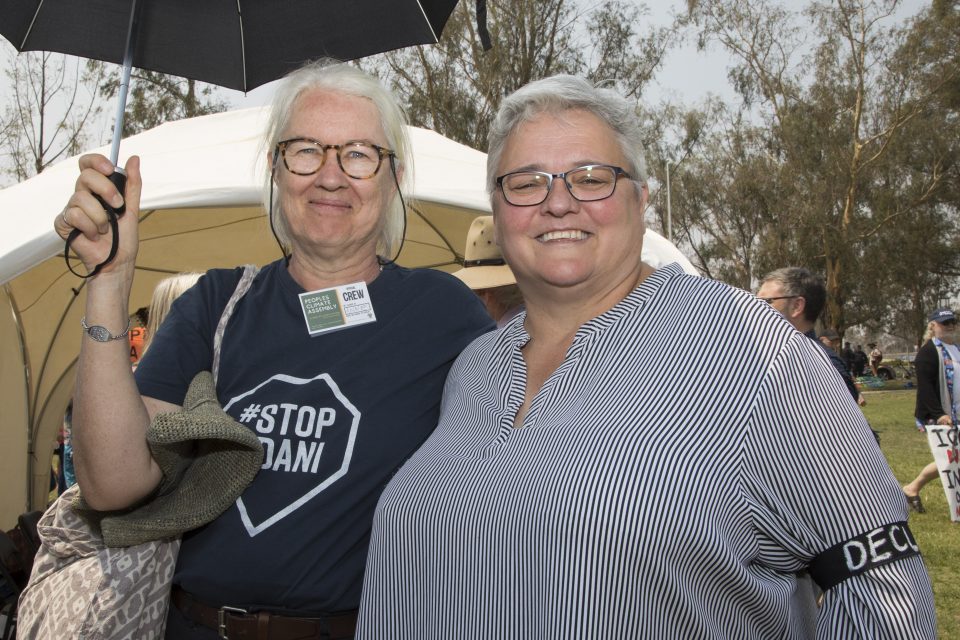 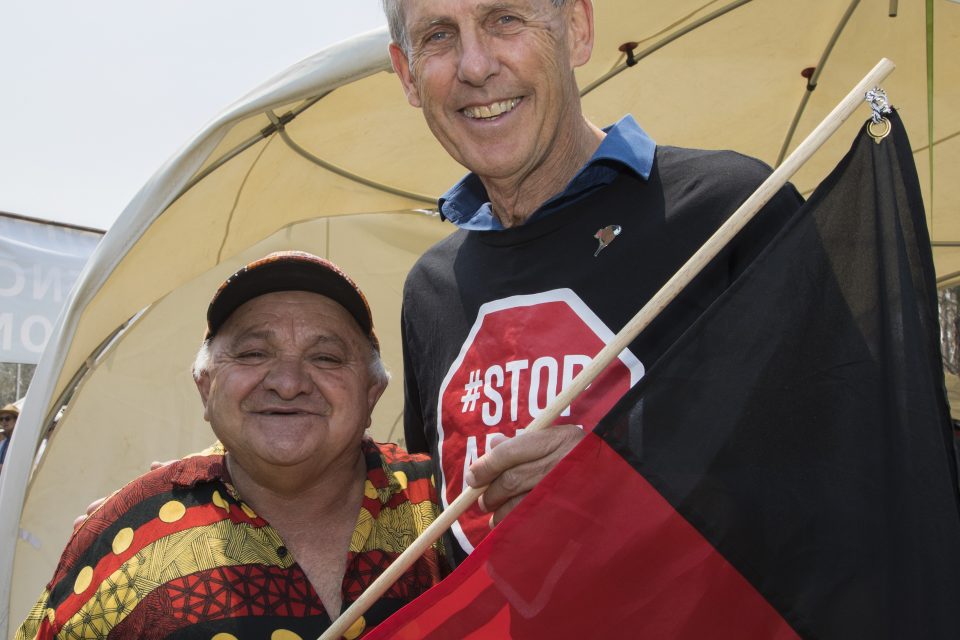 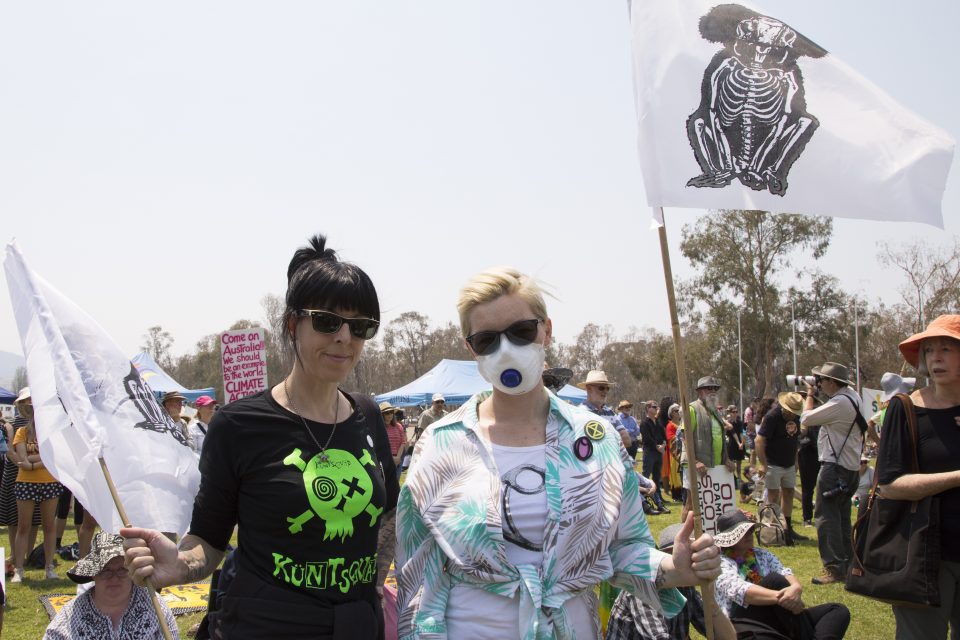 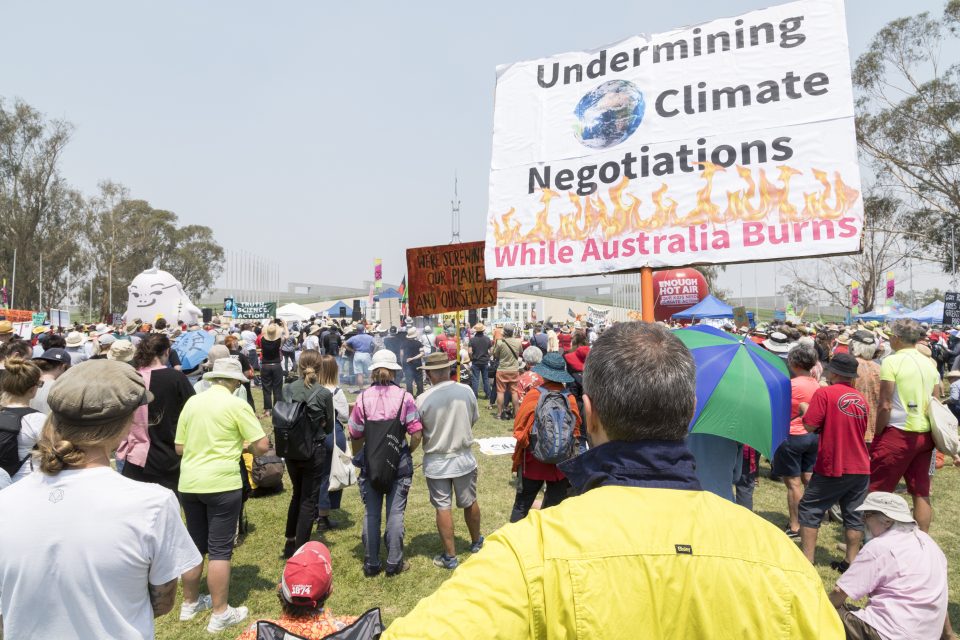 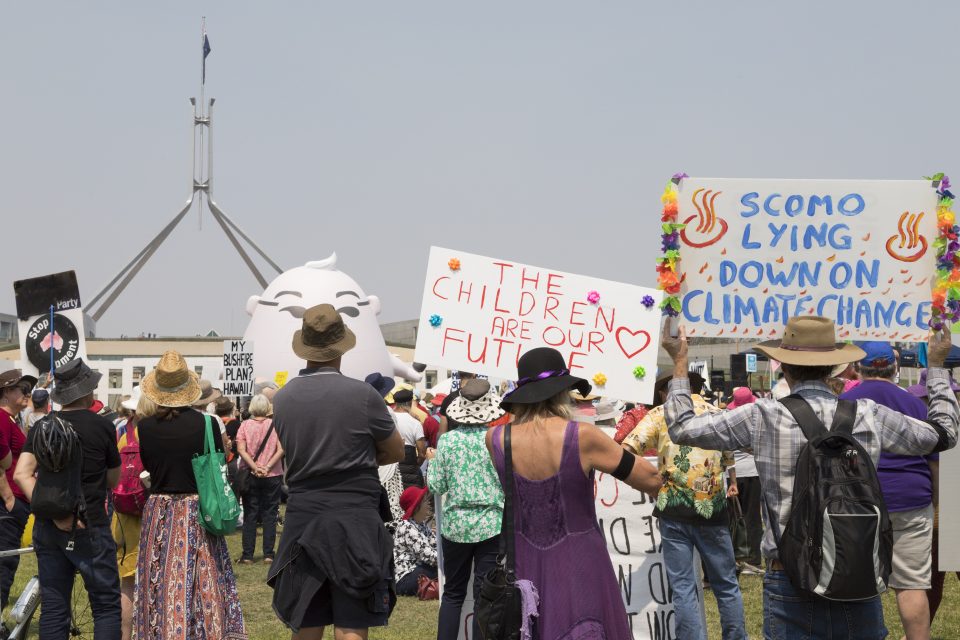 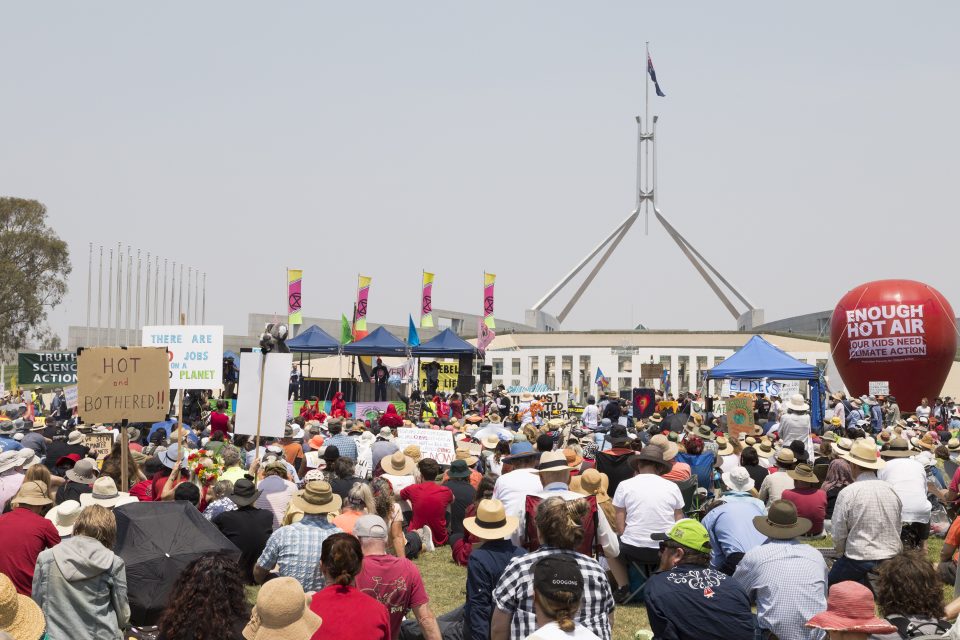 Does Dr Karl eat meat? If so, that is cancelling out his solar contribution.

So if Dr Karl doesn’t eat meat does that mean you’re now a climate change believer? Are you really that shallow?

I’m guessing he does. His brain has evolved.

If the science says too much carbon is changing the climate then stop chanting slogans and start planting trees. This is what trees do every day. They remove CO2 from the air. They do it quietly and more efficiently than useless slogan chanters. So get out and practice what you are preaching. I have a garden and I plant, nurture and water trees so I am doing my bit to keep temperatures down. Are you?

That isn’t good enough for the climate crisis warriors. They can’t see it and it’s too slow. They want to see things happening and NOW! (if not yesterday). Carry on, Acton.

Great if you can afford a block big enough for a garden with trees. That option is being made less and less available by our current government which wants us to all live in apartments without trees.

“…then stop chanting slogans and start planting trees”. Ahhh…mate, you can do both y’know.

Hi @Acton,
I’m less than 30 years old. I have built and maintained gardens in every rental property I’ve lived in since leaving home – at my own personal cost. I have donated hundreds of my low-income $$ to building microforests, restoring existing forests, protecting forests.
I have also been a “slogan chanter” for roughly 9 years now.
My “slogan chanting” friends also are ALL heavily involved in ecological regeneration AS WELL as trying to mitigate our impact through diet, transport, buying secondhand or mending what we have…
We are carrying as much of the burden as we can. We are not just interested in chanting. What we are interested in is those with the most money and power being held accountable for THEIR choices as well.
The $29 billion per year currently being spent in fossil fuel subsidies sure could plant a lot of trees, eh? And it might help if we stopped cutting them down at such a rate, too…

a mature tree absorbs 22kg a year. the world bank puts us at 15.83t per capita per year. So unless you have about 720 mature trees in your back yard you are not pulling your weight.

Other than that I think your suggestion has legs 🙂

Trees may remove CO2 from the air, but it doesn’t go away. As soon as the tree dies and decays, or a bushfire comes along, that CO2 is released back into the atmosphere.
Rather than planting new trees, let’s do more things to stop our existing trees from going up in smoke.

Looks like game, set and match here. Acton/Gilavon – next please

“Democracy is defined as government by the people for the people.” The people said no.

In case you forgot, Labor lost that election. That’s democracy in action.

Labor and it’s followers didn’t like and still won’t accept democratic democracy, they only want their socialist version of it.

Apparently it was about franking credits. Not that many people knew what that was…but they got scared at the prospect of losing them….even if they didn’t have them.

Some of us do understand Franking Credits astro, for me it was the climate hysteria.

Wow … you have hounded people on here who accept the current fires are unprecedented and demanded they prove it. Now you come out with a totally unsubstantiated claim that “it’s generally accepted” the 2019 election was a referendum on climate change. Are you getting that desperate to counter the climate believers that you are now drawing ridiculously long bows?

We need protection from our politicians who don’t listen to us or care about us. Political donations accepted before the last election mean ALP NATS and LIBS are listening – but not to the people – they are listening to big fossil fuel companies. Democracy is defined as government by the people for the people. Our major parties have failed. We need to rescue democracy.

Elizabeth the majority of people spoke against the climate crisis hysteria last May. Did you attend a polling booth? Democracy is doing just fine. The real problem is that some people don’t accept the concept of democracy until it fits their personal narrative. At the point where it does so I think it’s called Authoritarianism or Totalitarianism, I’m not sure which because I think they are an insult to human intelligence and dignity. For examples of them see Nazi Germany, Soviet Union, Russia today, Cuba, et al.

With socialism and anarchy you mean?

@Gilavon – please enlighten us as to the data on which you base “the majority of people spoke against the climate hysteria last May”. I can tell you for a fact, I didn’t know the election was a plebecite on the science of climate change. You don’t think that some of those voters could have been self-funded retirees who, while accepting climate change science, found the potential impact on their retirement incomes of changes to franking credits frightening? Or could those voters have been self-employed people, who while accepting the science of climate change, were concerned that they would have their “super” (in the form of an investment property) affected by potential changes to the negative gearing provisions? Or maybe those voters they don’t care one way or another about climate change and they just didn’t like Bill Shorten. Lots of possibilities there and I have no facts to support my hypotheses and neither do you. So whose using the concept of democracy to fit “their personal narrative”?