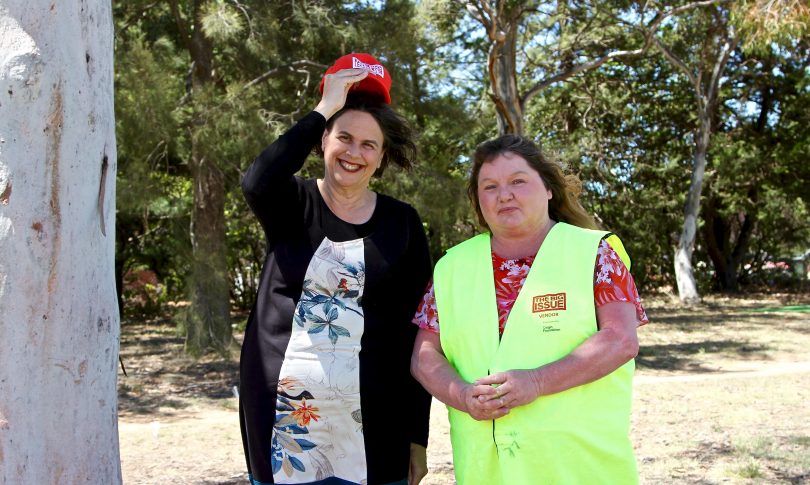 Most days, you will find The Big Issue vendor Luceil selling her beloved magazine at Watson.

“I hope to be there for the 1000th edition,” she shared with Region Media this week.

“I’ve been selling The Big Issue for 14 years. I have a lot of customers from when I sold it in Hawker. I probably have more customers than anyone in Canberra, and I still have some of them where I sell now in Watson.”

The magazine is an institution in Australia and is also Australia’s largest social enterprise that is committed to positively impacting those who face homelessness, marginalisation and disadvantage.

The Big Issue magazine started in Melbourne on 16 June 1996, where a small group sold the magazine on the steps of Flinders Street Station.

Today, a network of more than 500 vendors sell the magazine nationally, and in the magazine’s 23-year history more than 12 million copies have been sold. Vendors purchase the magazine for $4.50 and sell them for $9, gaining employment and earning a meaningful income.

The Big Issue‘s vendor support coordinator in Canberra is Kate Dawson from Woden Community Service. She says there are about 25 active vendors in Canberra. The money they make helps pay for essential items in their daily lives.

“A lot of our vendors are people who are on Centrelink pensions, or have low incomes, so The Big Issue can be a flexible way for people to supplement their income,” Ms Dawson said.

“One of the main things our vendors get is social inclusion by developing regular customers and people stopping by and having a chat.

“One of our vendors sells at the Ainslie shops and he took a short break earlier this year. We heard that the people there really missed having him about, so it shows just how closely integrated our vendors are in the fabric of the community.”

For Luceil, selling the magazine helped her buy a car.

“Since I’ve been selling The Big Issue, I’ve been able to buy a car and keep it going.

“My customers are my friends and one customer, she gives me a Christmas present and that’s a really special part of selling the magazine for me.”

“They learn lots of skills around knowing how many magazines to buy and knowing where and when to sell, and most importantly, developing customer relationships and the ability to engage with people in a busy shopping centre can be quite a difficult thing to do.

“So, when you buy a Big Issue from somebody, you’re helping them to develop some very valuable skills that they can use in lots of ways.”

The CEO of Woden Community Service, Jenny Kitchin, said they are very proud to have delivered the magazine in Canberra since 2004.

“During this time, vendors have sold almost half a million magazines,” Ms Kitchin said.

“Selling The Big Issue provides extra income, skills and a sense of belonging to some of the most vulnerable people in our community. We will continue to grow The Big Issue and promote it across the community.” 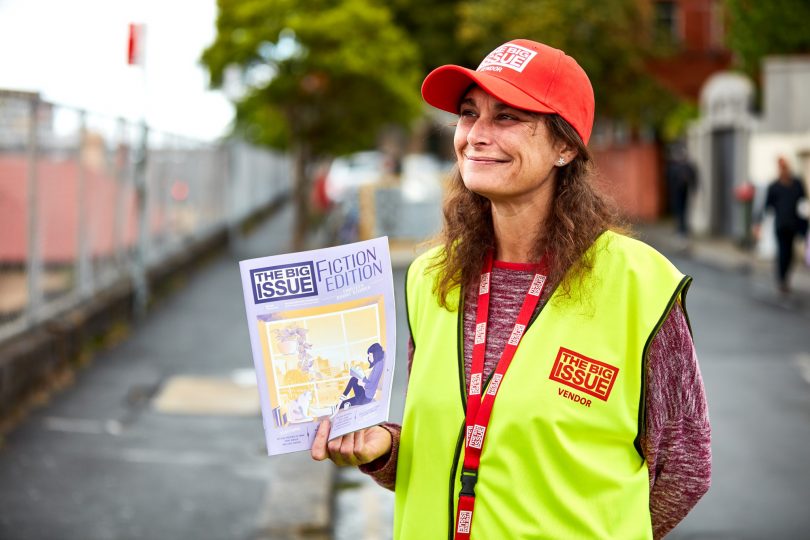 The 600th edition of the street magazine will feature a special retrospective of vendor profiles and stories, as well as an interview with cover stars Cold Chisel ahead of their summer tour.

The Big Issue CEO Steven Persson said they are extremely proud of the legacy and impact that The Big Issue and its vendors have built over the years.

“From our beginnings in 1996, our vendors have earned more than $30 million – a remarkable and empowering figure,” he said.

“Six hundred editions of our magazine represents countless interviews, photos and stories, but more importantly, represents thousands of lives changed for the better.”

The 600th edition also marks a refresh in the design of the magazine, changing the layout and adding extra vendor content, such as photos, letters, poems and stories.

The Big Issue has additional programs such as the Women’s Subscription Enterprise, the Community Street Soccer Program, The Big Issue Classroom and The Big Idea. For more information, visit The Big Issue website.

Pari Gilmour - 27 minutes ago
Hvcvlt Lukey Do you even know what Agenda 21 means? China btw has 94,000 cases total. They test regularly and consistently an... View
paulmuster - 34 minutes ago
Get your vaccine ASAP, enjoy your 2 hours exercise a day, stay away from the moronic conspiracy theorists online (some of who... View
chewy14 - 44 minutes ago
Yes, it seemed like those horrible journalists from "the hill" actually asked some necessary and difficult questions to hold... View
News 26

Sue Thurley - 27 minutes ago
Love driving up the Hume thru the Cullerin range. They are awesome... View
News 1

Tom Worthington - 45 minutes ago
Vocational institutions also provide a way to get a qualification with a minimum of study. The staff at CIT helped me documen... View
News 44

astro2 - 50 minutes ago
Hi Chewy, a few things need clarifying here; I'll try to be brief as I think this topic has gone 'off track' from the origina... View
chewy14 - 3 hours ago
Astro, That's a gross misrepresentation. "Current R4 doesn’t have this." How exactly will those redirects benefit? The ligh... View
News 2