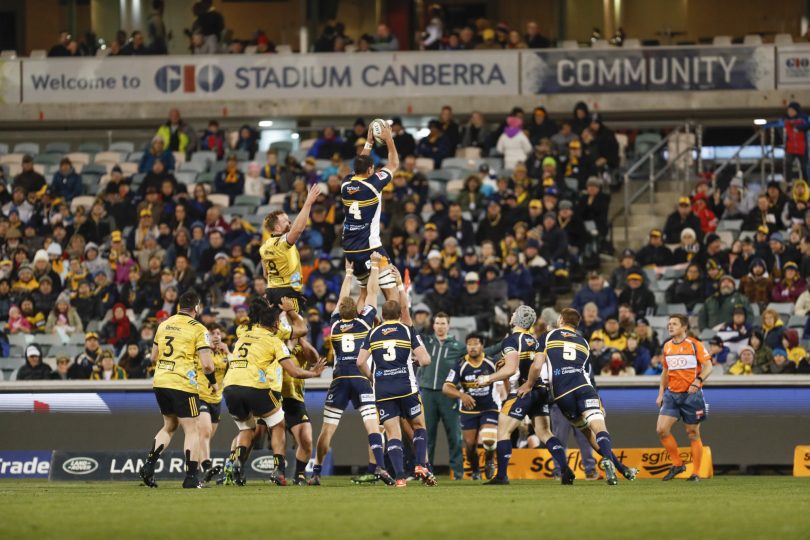 The Brumbies have many changes to the squad for 2020. Photo: File.

When the sun set on the Brumbies’ 2019 Super Rugby season, a new era began with the departure of five of the club’s biggest names in recent history.

At first it will appear strange to see a Brumbies team minus Sam Carter, David Pocock, Christian Lealiifano, Henry Speight and Rory Arnold.

Their places will be taken by some players you may not have seen play before.

Most interest will be on the replacement at fly-half for Lealiifano. With four players lining up to fill his considerable shoes, Noah Lolesio will be challenged for the 10 jersey by newcomers Reesjan Pasitoa and Bayley Kuenzle. Both these players impressed during the National Rugby Championship. Then there is Mack Hansen, who can play fly-half, fullback and wing.

Just as interesting is the starting halfback, with Ryan Lonergan preferred at times over Wallaby Joe Powell in the NRC. Another factor here is that Lonergan is an excellent goal kicker. Added to the mix is Issak Fines who returns to Canberra after an incredible season with the Western Force.

And for further intrigue, Nick White will be returning in the following season.

Just as difficult as it is to fill the spot left by Lealiifano, is the void left by Rory Arnold.

Arnold emerged as one of the best locks in world rugby. I would like to see the likes of Darcy Swain and Nick Frost given an opportunity to start, with Caderyn Neville an interesting addition to the squad. Murray Douglas and Blake Enever will also be pushing for game time.

The depth in the front row is considerable. Scott Sio, Allan Alaalatoa and James Slipper will lead the charge. Tom Ross, Leslie Leuluaialii-Makin, Harry Lloyd and Shambeckler Vui will all have an opportunity at some point in the season as well.

I hope to see hooker Connal McInerney get plenty of game time as he has grown immeasurably as a player in the past year, but the internal contest with Folau Fainga’a will be intriguing. There are a plethora of back rowers led by Pete Samu, Tom Cusack, Jahrome Brown, Rob Valetini, Lachie McCaffrey and new recruit Will Miller.

And where will Dan McKellar play Solomone Kata? Kata can play on the wing or in the centres and has the potential to be one of the most explosive players in the competition. Tom Wright and Len Ikitau will also provide a challenge to Tevita Kuridrani and Irae Simone, as will Sydney University centre Guy Porter.

Tom Banks has a mortgage on fullback, with Mack Hansen next in line, while there are plenty of contenders for the wing. The list includes Hansen, Kata, Wright, Andy Muirhead and Toni Pulu. Pulu, in particular, was outstanding at times in the NRC.

The Brumbies squad has plenty of depth in most positions. The only concern I have is the inexperience at 10 and at lock.

The number of changes and an injection of youth provide this side with an air of unpredictability. It may take time for the team to gel given the changes, but it also has the potential to make the Brumbies one of the most exciting outfits in 2020.

Croissant Henderson - 54 minutes ago
Love means nothing to tennis people. View
Jennifer Manson - 3 hours ago
Many people do not find it entertaining at all, but rather boring, so it's good to see some fun. View
Kate Olivieri - 4 hours ago
1. Damn, so many haters 2. You forgot Liam Broady complaining too 3. Aus Open should be so happy these guys are drawing crowd... View
Food & Wine 38