The Feldons @ The Pot Belly 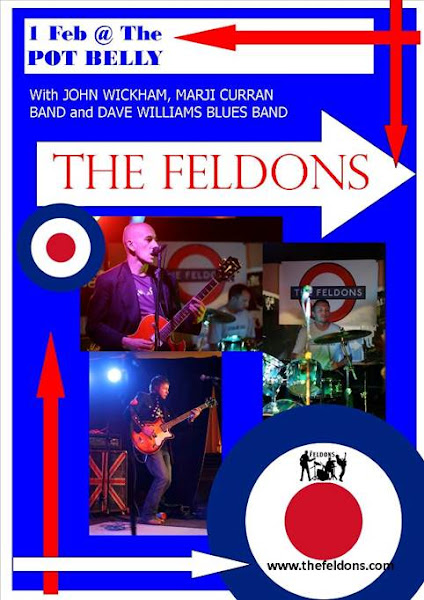 This Friday The Feldons are rocking Belconnen’s Pot Belly with the Marji Curran Band and Dave Williams Blues Band.

This Friday at the Pot Belly, Canberra’s lovable mod garage popsters, the Feldons will be blasting out an hour or so of their original three piece English mod sound.

Described as “something very Ferry on the Mersey, or Beatlesque. Mention of Paul Weller (does) not quite nail the sound but there (is) an undertone of that British invasion rock and roll that was big in the sixties” and “entertaining, danceable, listenable as well as easy on the eye”. BMA magazine also recently commented that they “wouldn’t have sounded out of place in a groovy record shop in swinging London.”

Wind them up, buy them a drink and watch them go like three energiser bunnies on speed. Well, maybe tortoises on beer, but you get the picture, and if you don’t then I suggest that you turn up and see for yourself.

Also on the bill is John Wickham, talented local soloist, the delectable and supremely talented Marji Curran (and band, including the equally delectable Phoebs on percussion) and old hands on the Canberra music scene, the Dave Williams Blues Band, who are most definitely not delectable in any way, shape or form.

Fun starts at 8.00pm and a fiver on the door gets you a few hours of local original music in one of Canberra’s most iconic drinking holes.

Just the standard rider, then..

Been a while since we played Melbourne, well, a few years. we’d need a Friday and a Saturday gig with accomodation.

Oh and free beer, coke and hookers, after all, we’re from canberra 🙂

I can keep this going almost like a tennis match. But only if I can be Djokovic and someone else is the Whiney Scot.

Though you’ll probably be stretching and having your ankles taped by now.

Gosh! Is that right and proper?

Gosh! Is that right and proper?

Louise Flood - 52 minutes ago
A nice idea but how will our esssential workers do this? Nurses, fireys etc. View
Kurt Neist - 3 hours ago
I wash dishes, order supplies and do deliveries. Can’t do any if it from home. At least the pay is rubbish...... View
Paula Simcocks - 3 hours ago
For older women who frequent public toilets when out, or those in restaurants etc , I want to see these areas much better mai... View
News 11

Mark Scarborough - 1 hour ago
As long as it is cheaper than flying. View
Justin Watson - 1 hour ago
Yeah it wouldn't be too expensive to get rail travel down to 2 1/2 hrs between Canberra and Sydney. A 1 hr fast train would b... View
Rainer Busacker - 2 hours ago
VFT would allow commuting for work and expansion of the Min ago Canberra region View
News 29

Elroy Jones - 2 hours ago
Completely agree View
duc nguyen - 3 hours ago
No one comes to Canberra and thinks the current West Basin is the place to be. Even though it is at the heart of the Nation's... View
Neil Chandler - 6 hours ago
I would have thought that whatever "heritage" the area had, both european and indigenous would have been pretty much devastat... View
Community 136

Rose Mary - 7 hours ago
David Blanchfield put it on the menu! View
News 3

Greg Garth - 10 hours ago
Gabriel Spacca Or a mixture of smoke and steam. View
Gabriel Spacca - 14 hours ago
If you pour water on fire it’s likely to cause more smoke not less. View
Sport 31

Nikos Manikas - 14 hours ago
Dianne Latimer if Brisbane get a 2nd team then all Ch9 will do is alternate between the 2 Brisbane teams. just like now they... View
Food & Wine 128

Emma Jelbart - 16 hours ago
Meagan Kopatz I'm in Fraser and heard something like about the time you would have heard that bang (or boom?) in Kaleen. Agre... View
Food & Wine 1

Lin Van Oevelen - 17 hours ago
That's excellent news! I rarely find the time to get to the markets and their fruit and veg is so much fresher than that from... View
show more show less
*Results are based on activity within last 7 days

Mystery surrounds a loud bang heard early this morning in Belconnen and Gungahlin but it's not the first to be...
Community 136

Is there anything more beautiful than a vibrant, perfectly arranged bunch of fresh flowers? Whether you are wishing someone a...
Best of Canberra 107

For many, the thought of visiting the dentist can come with a wave of anxiety. But even when you do...
News 60

@The_RiotACT @The_RiotACT
Resources developed for virtual excursions to Old Parliament House have been put to good use during COVID-19 restrictions but will also help remotely located students from across the nation to visit the Museum of Australia Democracy https://t.co/grpAeze1pX (49 minutes ago)

@The_RiotACT @The_RiotACT
Founders of Fortem Australia aim to support law enforcement & emergency service workers in the way that Soldier On has done for defence personnel https://t.co/qZBYhgppeh (2 hours ago)

@The_RiotACT @The_RiotACT
A new report from the Grattan Institute has labelled an East Coast bullet train connecting Melbourne and Brisbane via Sydney and Canberra an "expensive folly" that's "not realistic for Australia" https://t.co/UOL10vuiHu (3 hours ago)