If you ever waved a jug over your head in Mooseheads with your trousers around your ankles you’ll be fascinated to hear that Canberra’s Film and Sound Archive have restored a rare print of the historic Eagle Rock video:

Forty two years after the distinctive opening guitar riff of one of Australia’s best loved rock anthems detonated across Australian radio, this rarely seen experimental colourised version of Daddy Cool’s iconic promotional film clip for Eagle Rock has recently been found and restored by the NFSA. 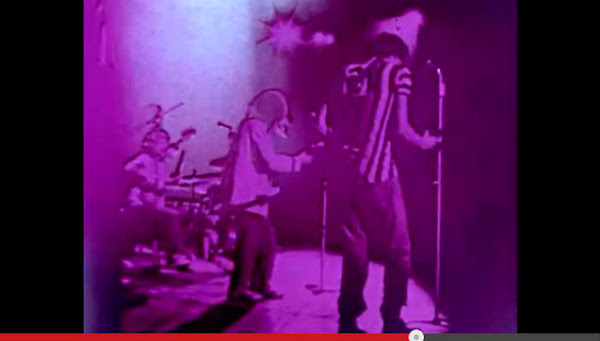 The best track from one of the best albums – ever.

I would say that this version of the Eagle Rock clip originated at the ABC. During 1975 – the first year of colour TV in Australia – Countdown featured a segment called the Countdown Flashback. Old black and white clips were shown, most of them altered with colour filters such as in this clip. I vaguely remember the Eagle Rock clip being shown featuring this colour effect.

Hell I get melancholy enough just watching Simon & Garfunkel in the park, and that came out 30 years ago.

And that clip would include one of those dudes playing with Darryl Braithwaite last week – the dudes that Barcham doesn’t know! And btw, I went to that show because I scored a free ticket. Ross Wilson and Joe Camilleri are still awesome, but Joe has a beer gut and it was drooping out below his shirt when he left stage after his set. Not a good look! The audience was predominantly boomers, naturally.

To give it all a bit of cred, I can report that Jo Jo Zep and the Falcons were the first pub band I ever saw – Arkaba Hotel in Adelaide, I reckon in 1974.

Suz 'olmes - 11 minutes ago
How about something nice? Invest some money to clean up the tavern and make it more family friendly or a space for cafes. No... View
Jenny Keeley - 3 hours ago
I already have 3 McDonald less than 10 minutes from my house. Put something else there, anything else! View
Chris Goodrum - 9 hours ago
Many Happy New Years Eve’s spent there, met my partner there many many years ago! It should be heritage listed not knocked... View
News 19

Julie Macklin - 2 hours ago
And that is the most constructive comment you could come up with 😂 View
Warwick Alsop - 3 hours ago
Gotta love those NIMBYs View
Marea Fatseas - 6 hours ago
Who said the proposed facilities in Fyshwick are “going green”? How is CRS recycling just 5 percent for local use, export... View
Breaking 1

Valleyboy - 2 hours ago
NSW has every right to protect itself from potential threats from any prospective entrants, including ACTians. The ACT also h... View
Property 54

Yuri Shukost - 5 hours ago
Barr will find any reason not to build a new stadium or renovate the existing one. I suspect he’d find the money if it affe... View
Fred Pilcher - 6 hours ago
Good news. Sanity prevails. View
Ben Jones - 9 hours ago
Tom Allen where is this mythical stadium ? View
News 22

Chris Endrey - 9 hours ago
Who is most immune to hardship, who is pampered most, living the life that even the Gods would envy? The answer, clearly, is... View
Spiral - 9 hours ago
"But that is, of course, not true – our society chooses to devalue the arts because the focus of all of our energies is mon... View
Acton - 11 hours ago
Many, if not most in the arts community have long shown utter contempt for us in the broader community and made a living out... View
News 15

Jim OR - 12 hours ago
Imagine a border lockdown between the two... View
News 53

@The_RiotACT @The_RiotACT
Interested in purchasing a home through the land rent scheme? Check out this beautiful four-bedroom home for sale in Moncrieff https://t.co/C8dibvyzPU (10 minutes ago)

@The_RiotACT @The_RiotACT
Hungry for a nature fix in your own backyard? From tomorrow, the ACT Government is waiving entry fees to Tidbinbilla Nature Reserve until the end of 2020. The koala enclosure has been upgraded and being late winter, you might even spot a platypus https://t.co/NDT7TRJofV (2 hours ago)