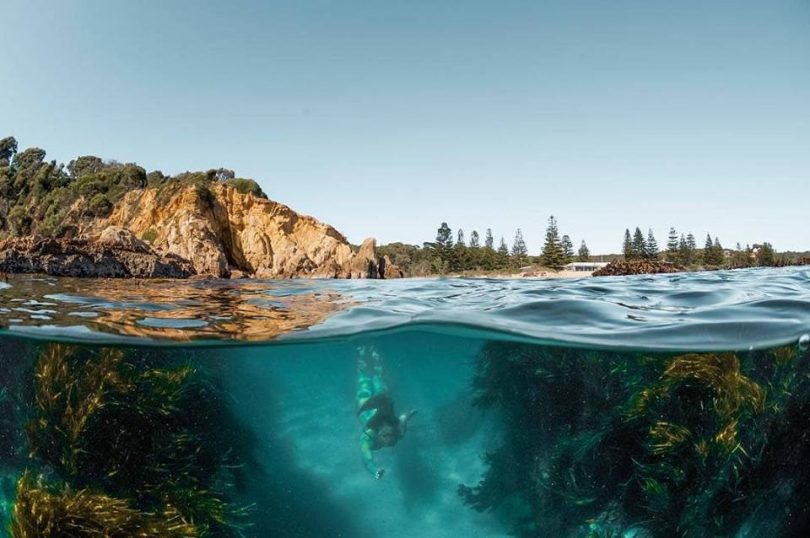 A familiar face will continue to put the Sapphire Coast in front of people wanting a holiday, with Anthony Osborne selected to deliver tourism marketing services on behalf of the region until 2022.

The future of the local industry was turned upside down in mid-April when The RiotACT reported that Sapphire Coast Tourism (SCT) would not tender for the new contract.

SCT has been doing the job for almost a decade, but in a letter written to Bega Valley Shire Mayor, Kristy McBain and leaked to The RiotACT, SCT Chair Bruce Leaver expressed his frustration.

“It was felt that it would be unconscionable to submit a proposal [tender],” Mr Leaver wrote.

The tender documents prepared by Council for the open market point to a fixed price contract of $327,000, including $99,000 to be allocated to Visitor Information Centres.

Prior to the tender process, SCT provided advice to Council, suggesting ‘bare bones’ funding of $390,000, CPI adjusted each year for the next 10 was needed. Additionally, SCT presented an option where Council’s allocation topped $640,000 a year.

“$640,000 is still about one-third of the amount allocated by Eurobodalla [Shire Council],” Mr Leaver wrote.

Did you know that the Bermagui Blue Pool was originally called the Blue Hole and was only half its current size? Locals enlarged and improved it to its present standard in the 1940’s.

Despite the unrest, three organisations did however tender for the new contract; Melbourne based Chatterbox Marketing, David Porter’s Goto Plus, and a new entity formed by current SCT Executive Officer, Anthony Osborne, who has been in the job for almost seven years.

Mayor Kristy McBain says it was Mr Osborne’s intimate knowledge of the local industry that set him apart.

“His answers were really strong on how he proposed to move forward with the branding of Sapphire Coast and how he would look to incorporate stakeholders into his strategic planning for the future.”

“Given the information provided by all three tenders, Councillors decided that his was the one that provided us with the best opportunity,” Cr McBain says.

“Anthony has been instrumental in achieving excellent outcomes for the local tourism industry and for the Shire more broadly, he won’t be starting from scratch which is a big bonus.”

Mr Osborne says he respects the work of the SCT Board and as such won’t be making too much comment at the moment.

“I feel privileged to have the opportunity to continue marketing this destination, but it’s not appropriate to say anything more than that at the moment,” he says.

SCT Chair, Bruce Leaver says the organisation will spend the next month winding up its operations and preparing for the hand over to Mr Osborne.

“Good luck to Anthony, he consulted with me and I encouraged him to tender,” Mr Leaver says.

“But knowing Anthony he will do it very well,” Mr Leaver says. 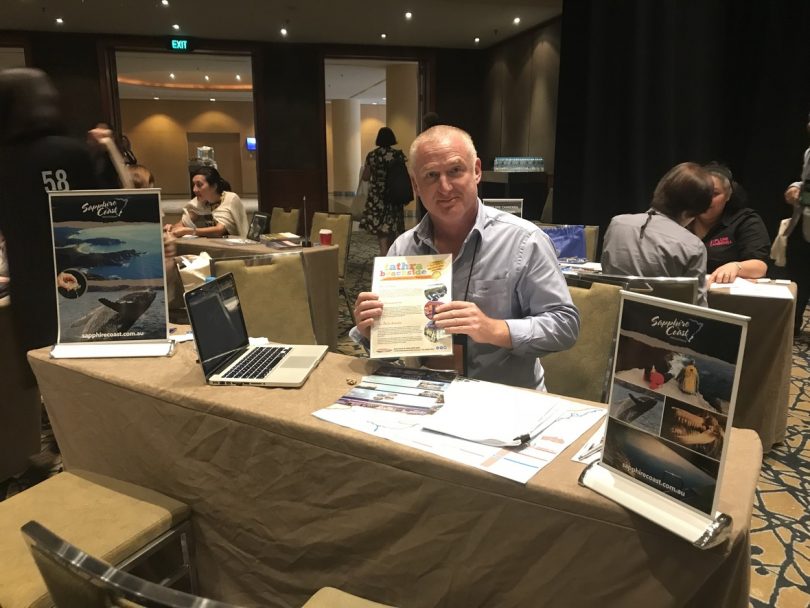 Anthony Osborne on the job with SCT in Hong Kong during 2017 with the Australian Tourism Export Council. Photo: SCT.

Cr McBain says she is confident the money allocated by Council for the job is enough.

“We’ve had a number of discussions with Sapphire Coast Tourism; in the last three or four years we have given additional funds; when we had to go out to tender for the new contract they knew we could only put in the amount we collect through the specific special rate variation that covers marketing, tourism, and promotion of the Shire.”

Suggesting that Council gets good value for its investment Cr McBain says, “When you look at average dollar spend and the average nights stay, Bega Valley rates higher than Eurobodalla.”

Figures supplied by SCT show a 5% increase in visitor nights since 2013 and a 12% increase in tourist spending for the same period.

“What will now happen is that there will be more flexibility for Anthony to make decisions and liaise with Council without the approval of his board, they’ll be less constraints,” the Mayor says.

“Anthony will now prepare a new Destination Marketing Plan, and we’ll work closely with him on that.”

Mr Leaver says the challenges ahead are well known.

“If I was council I would be seriously planning for this significant change coming down the road; the money they put forward for tourism doesn’t cover that, that’s why we didn’t tender and we maintain that position.”

Cr McBain says the Sapphire Coast is well placed to make the most of the international market with Mr Osborne on board and some strategic relationships in place with Canberra Airport and the Melbourne to Sydney Coastal Drive.

From beautiful beaches to towering lighthouses – you'll never be lost for things to see and do on the Sapphire Coast ?

The future of a number of specific grant-funded programs managed by SCT is yet to be determined, but Cr McBain says she expects most of them, including the post-bushfire marketing campaign for Tathra to be managed by Council after July 1.

“Because of the way some of those grants are structured they have to come back to a designated agency which will be Council, however, we are proposing that Cruise Eden will stay within tourism marketing operations,” Cr McBain says.

“Anthony Osborne has also proposed taking on Cruise Eden Coordinator, Natalie Godward for an additional 10 hours a week in a marketing and promotions role within his new business.”

Sapphire Coast Tourism will hold its Annual General Meeting before June 30, where the company and role of volunteer directors will formally dissolve.

Ian McLeod - 38 minutes ago
Charles Godworth yes I do and I also upgraded to three phase and will install a Zappi charger, but most won't need it. The po... View
Ian McLeod - 54 minutes ago
Ben Garden which is what I'm doing and around town 2KW home charging is fine View
News 27

Robert Taylor - 42 minutes ago
I suppose it was unsafe and could not be kept for pedestrians & bikes. Sad View
Stephen Murray - 3 hours ago
I remember the punt that the bridge replaced. View
Christopher Cuba Rabanal - 5 hours ago
I’ve heard the best fish and chips in the bay is closing due to the lockdowns. That’s pretty sad 😢 View
News 27