The Liberators at the Polo 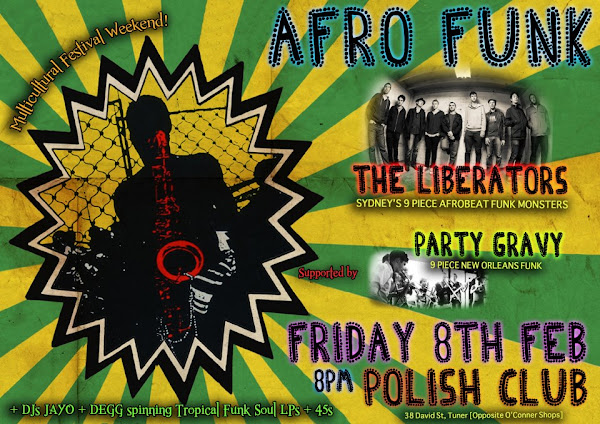 This looks rather exciting:

THE LIBERATORS
The Liberators is an 9 piece collective based in Sydney; a solid example of the type of new afro-inspired funk that is rivaling the greatness of classics from 70s Africa. With a fierce array of super heavy guitars, percussion, and horns – all put together with a range of sounds that really portray the full spectrum of their style – The Liberators serve up some sizzling treats!
Their debut album’s opening stormer “Multiculture”, to the kicking rhythm of “Rags To Riches”, the uplifting “Liberation” or the jazzy inflections of “Denga” featuring legendary drummer JoJo Kuo on vocals, this album is a tightly delivered assortment of funky afrobeat tunes with a jazz-dance flavor. Turn on your air-conditioning people, the heat is on

THE LIBERATORS can certainly be said to be off to a smoldering start; with their debut gig taking place at Russ Dewbury’s famous Night At The Jazz Rooms, the liner notes of their debut album being written by Antibalas frontman Amayo (Daptone Records / Ropeadope / Afrosound Records), and the patronage of DJs such as Gilles Peterson (BBC 1), this group can count on some serious support! Not only does this 9 piece outfit include members of Dojo Cuts among its division, but for their first full-length they also call on the vocal talents of guests such as Jojo Kuo (Fela Kuti / Daktaris / Antibalas), Roxie Ray (Dojo Cuts / Underbelly) and Ghanaian-born Afro Moses. The result is an incredible set of new afrobeat tunes and funky jazz-dance grooves proving the masterful musicianship of this band.

PARTY GRAVY
Canberra Brass Band. Here to get your Party Started.
We’ve been friends and musical colleagues for 4 years. We have always had an interest in Jazz, Funk, Rock and Brass Bands. Through a love of the music and hard work busking in Canberra to try to add some kind of vibrant life into our cold cold city, we have come through it all as Party Gravy. We are hear to make you dance, make you sing, make you cry.

2. A covers band with a twist, a covers Brass Band. MJ, Marvin Gaye, Gnarles Barkley, Beyonce, Rage Against The Machine, Katy Perry… everything.

Brought to you by the spirit of Fela Anikulapo Kuti!

Better get there early, the Polo’s been selling out more often than not lately.

Tina Maree Williams - 20 minutes ago
My other half and I saw the writing on the wall when the eyesore of Whitlam increasingly impinged on our view driving down Wi... View
Demi Naylor - 8 hours ago
Well.. you know.. f they can afford a house or find one suitable to rent.. View
Julie Macklin - 8 hours ago
Marc Edwards That can made it worse for public transport. It's okay for those living nearby, but for people in other parts of... View
Opinion 65

@The_RiotACT @The_RiotACT
The Canberra Hospital Expansion project start is within sight. Will it deliver the goods, and on time? https://t.co/VlDl3D7QxQ (46 minutes ago)