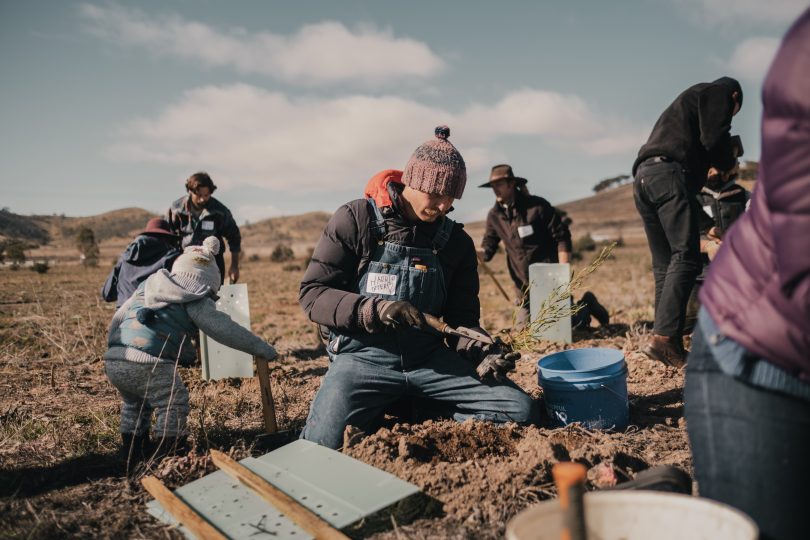 After suffering an incomprehensible loss when their newborn son, Finley River, passed away just after birth, Tory Bridges and Harry Townsend are doing what they can to create new life in different forms.

The pair’s vision has seen them create the Finley River Fund, a two-pronged foundation that will fund medical research into the impacts of bushfires on pregnant women, and support the creation of climate resilient forests.

As part of the latter component of the fund, 45 of the couple’s close family and friends gathered at Scottsdale Reserve on 29 May to plant 340 native trees with Bush Heritage Australia.

The date was almost exactly one year after Finley’s passing.

“On the day, we were told this area of the riverbank would now be called Finley’s Creek,” says Tory.

Tory explains that for her and Harry, trees are the ultimate symbol of hope for the future.

“By plunging our hands into the dirt and joyfully planting trees, we are healing nature, healing ourselves and honouring the life of our son,” she says.

Finley’s cause of death is still unknown, but a coronial inquiry is underway to determine it.

“He was a beautiful little boy, a ray of golden light that shone into our lives,” says Tory.

“For more than a year we have spoken to doctors and lawyers using their language which is very clinical.

“So it was beautiful to be able to come together and share stories about Finley’s spirit which is still with us.”

Several friends and family members created artworks and poetry inspired by Finley, which they bound into a booklet and shared on the day.

“Even though we don’t have his physical presence with us, his soul just shines so brightly,” says Tory. 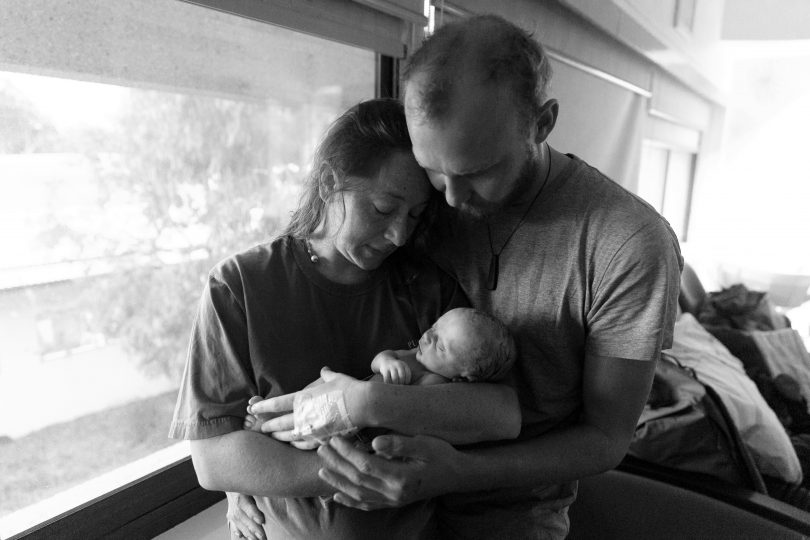 The idea for tree-planting goes back to the Black Summer that Tory lived through while she was pregnant.

In the summer of 2019-2020, she and her partner were staying with Harry’s parents at Wapengo on the NSW South Coast, and they had to be evacuated to the beach at Bermagui in the very early hours of New Year’s Eve.

“Seeing all of the devastation to the landscape that we love inspired us to fund bush regeneration for future generations of little kiddies and for our amazing planet which is under so much threat at the moment,” says Tory.

During her pregnancy, Tory was often exposed to levels of pollution that were well above the safe threshold for pregnant women.

Now the Finley River Fund is helping an ANU study that is researching the effects of bushfire smoke on women and their babies.

The ANU Mother and Child 2020 study is being led by Professor Christopher Nolan, who says there is simply not enough known about how bushfires affect pregnant women, as well as those with newborns.

“It’s a two-pronged event because not only are there the physical effects of smoke and extreme heat, but there’s also the stress that comes from being evacuated and from normal family routines being disrupted,” he explains.

The study will focus on women in Canberra and the surrounding region.

The study is still in its early days, and researchers are soon to begin unpacking the data provided in response to questionnaires sent out to women who were pregnant during the Black Summer.

To help with Finley’s Tree Planting Memorial, you can donate to Tory and Harry’s GoFundMe.