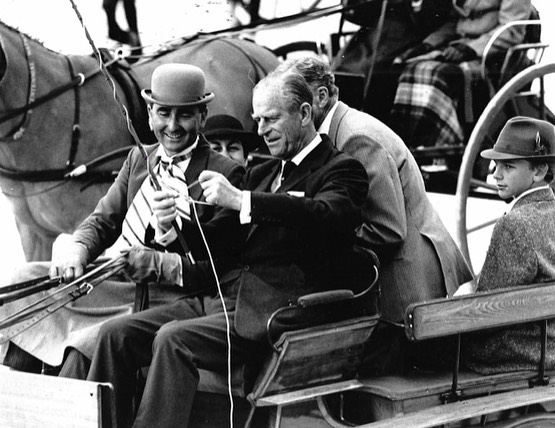 The announcement that Prince Philip had died – aged 99 and after a long, full life – has prompted many memories, mostly garnered from media coverage or seeing him from afar.

The prince consort visited Australia 20 times and he was a familiar figure in Canberra, walking the customary two steps behind Her Majesty the Queen on ceremonial occasions.

But some Canberra locals recall a very different royal, one who tore up the carriage-driving circuit, went hell for leather behind a team of ponies, and inspired a future world champion during a bicentennial visit.

The prince was instrumental in formalising the rules for carriage driving as a competitive sport during his 22-year term as the longest serving president of the International Federation for Equestrian Sports. As a member of the British team, he won a world championship in 1980.

Long time South West Slopes carriage driving enthusiast Brendan Dwyer says it was a highlight of the 1988 bicentenary celebrations when Prince Philip, who was also patron of the Australian Carriage Driving Society, was present for a large parade and competition event in Canberra.

Carriage-driving competition is based around three-day equestrian eventing rules, beginning with a dressage phase requiring precision movement within an arena. A cross-country or marathon phase follows where competitors must move through obstacles including numbered gates in the correct order and as quickly as possible.

Finally, the obstacle driving course takes place around modified traffic cones topped with balls – points being deducted if the cones are nudged. An overall score is calculated from the combined results.

“It’s quite an involved sport and requires a high level of training and skill,” says Brendan.

During his long competitive career, Prince Philip drove teams of horses and then a team of fell ponies, often at breakneck pace and with the occasional spill.

“It can be a dangerous sport for sure,” says Brendan. “But that’s true of many equestrian sports. There’s always a level of accidents.”

Prince Philip attended the bicentennial carriage-driving event in Canberra in 1988 as an official guest, and he met many competitors and participants. He’d not long left when a landau drawn by a team of six horses bolted, causing high drama at the time.

Brendan remembers the prince as “incredibly interested” in the sport and he says it was clear his involvement as a patron was a personal passion that went well beyond formalities.

“The interest went up to the point where a member met the prince several years ago in the UK, and he enquired about our quarterly magazine and said he hadn’t received his for some time,” says Brendan.

“He was generally a very good horseman all round, and carriage driving was his passion. For those who met him here in 1988, and since in the UK, he was very down to earth, genuinely interested in the sport and how people were going.

“There’s quite an interesting photo of that 1988 visit where Prince Philip is driving a carriage and the teenager on the back is none other than a young Boyd Exell, who went on to win five world championships and multiple indoor championships.”

Boyd has spoken on social media about first meeting Prince Philip at the Australian Carriage Driving Championships in the bicentenary year.

“What a privilege it was to meet him as a young teenager – a meeting that really fuelled my passion for the sport,” he wrote on his Facebook page.

“During the years I have been honoured to meet him both in a professional capacity and at a personal level, both of us sharing our stories and passion for horses and the sport of combined driving.

“I am forever grateful for his tenacity for introducing our sport at an international level, and his legacy will continue to inspire and encourage all those involved in our driving sport.

“Prince Philip, you will be sadly missed.”

Alex Nicolson - 52 minutes ago
Albert Blair It did show the gubmint was trying to do something but I agree it seemed pretty ineffective. View
Scottie Zuxkerberg - 6 hours ago
I had no idea these vouchers were on offer, so a 100% total failure from my perspective... pretty much the usual from this in... View
Daniel Oyston - 6 hours ago
Scott Abela sorry, confused how free parking would fix it all 🤷‍♂️ View
News 35

Tim Evans - 1 hour ago
They were useless. View
Justin Alexander - 6 hours ago
Bekah Glaz there are drastic shortages in certain subjects (in some schools 70% of their “maths” teachers aren’t traine... View
Bekah Glaz - 7 hours ago
Justin Alexander I moved to ACT from WA, and couldn't get a job in teaching. There isn't a shortage of teachers, there is a s... View
Community 1

aussie2 - 3 hours ago
I recall asking for our local Theodore oval to be irrigated and was told there was no plan-use Calwell instead. Yet the kids... View
Motoring 1

ChrisinTurner - 3 hours ago
Imagine the performance it would have if it was an EV. View
Food & Wine 10

Kate Eliza - 7 hours ago
Hristo we are building a farm house right now and can Def attest to the huge increase in costs of building materials.. and di... View
Sheridan Burnett - 8 hours ago
Hristo Vizovitis Well if they could provide the victims with proof that this happened then they would have nothing to worry a... View
Sheridan Burnett - 8 hours ago
Joel Byatt Would be nice if they can provide proof to the victims. Other developers seem to have been able to operate under t... View
Property 64

assiduous - 8 hours ago
You are correct Acton, its the vested interests like the financial sector making money on the credit issued and downstream re... View
show more show less
*Results are based on activity within last 7 days

Newly-released documents have revealed how police believe a short-lived prison break was pulled off in July this year. Lila Rose...
Breaking 0

ACT Policing has charged a 19-year-old man from Greenleigh in NSW with murder following an incident in the City on Saturday...
News 1

Calls to triple-zero by Canberrans over late-night lawn mowing, lost phones and poorly parked cars have prompted a reminder from...
News 161

With rain comes growth - and while no one would argue this is a bad thing, many agree it is...
News 35

@the_riotact @The_RiotACT
Lake George is lapping at the highway after recent rain - that story and all the top #news and features in this week's newsletter. Subscribe now! https://t.co/jghXdK3ZbG (19 minutes ago)

@the_riotact @The_RiotACT
The ACT Government will begin consulting with communities about what they'd like to see done with their local, dryland ovals which can often be underused. Possible uses include nature parks, dog parks, BMX tracks and micro-forests https://t.co/HcntqpP2Cc (1 hour ago)