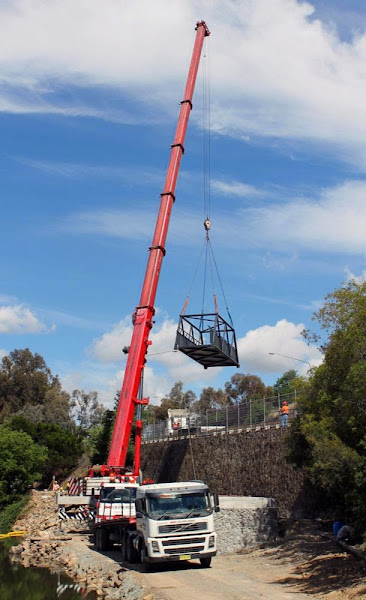 Shane Rattenbury has mixed news from Molonglo Reach where after a pathetically drawn out process the bike path along Morshead Drive is finally getting replaced using the old Red Bridge from the Belconnen Mall.

Sadly though “blending into the landscape” has been more important than the Bridge’s own historic values.

“The new bridge, which previously connected Westfield Belconnen and Lathlain Street, was a well known icon to residents of Canberra and it is exciting that we can recycle it to create a new Molonglo Reach pedestrian bridge, replacing the shared path which was damaged by floods in March 2012,” Mr Rattenbury said.

“The former ‘red bridge’ has been painted grey to blend into the landscaping and has been dismantled into six sections to be progressively installed over the next three weeks.

“The bridge has been separated into sections to help minimise disruptions to traffic on Morshead Drive during the installation phase.

“Work has already been carried out to repair the embankment adjacent to the former shared path as well as to stabilise the retaining wall. The new abutments and piers for the bridge have also already been installed in preparation for the bridge deck.”

Mr Rattenbury said work to build the new pedestrian bridge has been carefully planned to ensure works do not impede on the recreational use of the lake and river as well as to protect river habitat.

“During construction, particular care has been taken to ensure the local flora and fauna specieshave been protected. This included a number of burrows which are home to a group of platypuses.”

Due for completion late-2013, the project has cost $1.8 million and has been funded by ACT Government insurance.

You also need to add in the cost of stabilising the wall that holds up Moreshead drive, building the bridge abutments and repairing the bike path that got washed away. All in all $1.8m doesn’t seem so bad actually and all paid for by insurance.

I wonder if it’s the same contractor who did the Kambah bridge (and had to come back a month later to repaint it).

I see a red bridge and I want to paint it grey.
– Shane Rattenbury, MLA

How much for a new bridge?

Steve Tsiamis - 1 hour ago
John Bosch I lock myself at home on these weekends. A short walk for a fish down at Cullendulla. View
John Bosch - 2 hours ago
Yep. Hopefully the traffic won't be backed up half way to Mogo like it was yesterday afternoon. View
Community 2

jorie1 - 5 hours ago
Well said Chewy14. Certain people cannot just change the Constitution because they feel like it or think it will work better... View
JS9 - 6 hours ago
You have no idea whether the majority want it or not at this point in time. That statement may have held in the late 80's/ear... View
chewy14 - 7 hours ago
Once again there's no real discussion around why the ACT Government should have these powers when the Constitution specifical... View
Lifestyle 3

Lauren Nihill - 5 hours ago
We are all so proud of you Kirrah! View
News 4

keek - 6 hours ago
They are an introduced pest and should not be roaming wild in any case. View
News 76

JS9 - 6 hours ago
Very true JC - as you say a lot of information is given away voluntarily, and with pretty much every phone having GPS in it t... View
JS9 - 6 hours ago
So you turn up to cafes and sit down for a lunch with people who you don't even know their names then CR? Surely across a gro... View
Julie Macklin - 17 hours ago
Samuel Gordon-Stewart I'll try that next time. Thanks. View
Breaking 4

Anne Rankin - 17 hours ago
I can’t wait to get back there again soon. View
Nadia Pessarossi - 17 hours ago
Love Corigans Cove! Only place to stay!! View
Lifestyle 33

Michelle Paul - 17 hours ago
They probably have to keep wearing their ring until the show is over.To throw us all off. View
Motoring 6

David Tickner - 19 hours ago
Alan Davey, sad but so true mate. So many whingers out there these days, with nothing better to do with their life unfortunat... View
Opinion 8

steve2020 - 21 hours ago
It's cross-cultural and inter-cultural collaboration. No different to many football teams or workplaces, for example. View
show more show less
*Results are based on activity within last 7 days

@The_RiotACT @The_RiotACT
Manuka Pool is celebrating its 90th anniversary and the Friends of Manuka Pool want to hear your stories about this iconic Canberra landmark https://t.co/6dssl3Zwgp (3 hours ago)