Experts in buying, selling & renting
Your property, your future
1 June 2022

The local canine population in Gundagai has grown by three pups in the past year, which can mostly be seen lolling around Sheridan Street, day and night.

There to greet locals and visitors to the town, they’re the offspring of Lady, the Dog on the Tuckerbox. Unveiled in 1932 this memorial, which arose from a bush ballad, perpetually greets traffic coursing in and out of Five Mile Creek.

It took 90 years for the pups to emerge but only fitting the trio of statuettes, created by sculptor Darien Pullen, be named. The call went out nationally last year for suggestions, resulting in 330 individual submissions.

The big reveal had been set for the town’s Hair of the Dog Day on 13 November last year – the second phase of a two-day horse racing carnival.

But an unseasonably cool, damp 12 November doused Hair of the Dog Day plans. Instead, the names Scoop, Chip and Snags were revealed a day early as the winning names by popular vote.

Today you can see Scoop lying outside Gundagai’s FoodWorks supermarket contently chewing his rolled-up newspaper, Chip sitting loyally outside the Lotts Family Hotel and Snags caught red-handed with his string of sausages outside Smarts Butchery.

Scoop looks so lifelike that ironically, the community think he’s dead – but Gundagai Tourist Information Centre has assured us steps are being taken to rectify that.

All this reflects the town in the south with its predilection for wry, satirical humour.

Take Snake Gully for instance, the home of Dad and Dave Rudd whose farming endeavours famously played out against the backdrop of late 19th century land selection in author Steele Rudd’s (aka Arthur Hoey Davis) famous On Our Selection short stories.

Rudd’s upbringing amid a boisterous family on a homesteading farm leapt off the page and on stage, silent films, radio, TV and song. The Dad and Dave story deviated south, stopping near Gundagai with Mum and Mabel a more prominent part of the mix.

Dad and Dave from Snake Gully was an Australian radio drama series based on the On Our Selection stories of Steele Rudd. From 1932, 2276 episodes were released over 16 years, making it one of Australia’s longest running radio soaps. It came to be known simply as Dad and Dave. 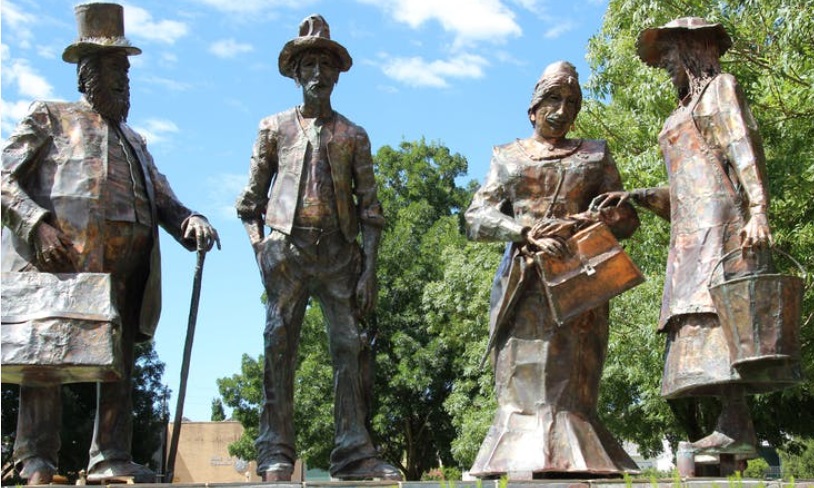 Its theme tune Along the Road to Gundagai sits among a large catalogue of national folk anthems thanks, in part, to Slim Dusty.

Musician Jack O’Hagan authored it to life in the early 1920s with baritone Peter Dawson recording it in London in 1922. Some 40,000 to 50,000 copies were sold in the first three months, elevating it to prominence.

For WW2 soldiers Along the Road to Gundagai became a beacon of longing and hope.

Incidentally O’Hagan wrote two additional songs about Gundagai without ever having been there – Where the Dog Sits on the Tuckerbox and When a Boy from Alabama Meets a Girl from Gundagai. He finally visited the town in 1956 as guest of honour at its centenary celebrations.

Where the Dog Sits on the Tuckerbox stemmed from an 1850s ballad and possibly earlier oral versions and later in poetry and song. It depicted an unlucky bullocky whose team had become bogged “nine miles from Gundagai”. There then followed a litany of further calamities until, to cap it all off, his dog “sat” on the tuckerbox in which he kept his food.

So as history and the Hume Highway would have it, all roads in this tale lead to Five Mile Creek; lightly obscured by trees, the little settlement a swerve and a dip down a hill on the Hume Highway north of Gundagai.

But geography played no part in the convergence of Five Mile Creek with Snake Gully.

That was a stroke of tourism genius from the Tout family who operated the local service station opposite Lady, the Dog on the Tuckerbox.

They began to tell visitors that the Five Mile was the place on which Dad and Dave was based. In 1979 they commissioned sculptor Aurel Ragus to create life-sized copper sculptures of Dad and Dave, Mum and Mabel as evidence of that “fact”.

While the sculpture was initially erected at Five Mile Creek it was moved in 2005 to its present location in Carberry Park adjacent to Gundagai Visitor Information Centre on Sheridan Street, Gundagai.

Former Mayor Abb McAllister says the stories and the flourishing number of statues are a quintessential reflection of the history and character of the town, its people, but more so, its place on Australia’s map.

“It doesn’t matter where I go,” he said, “everybody knows where Gundagai is.”