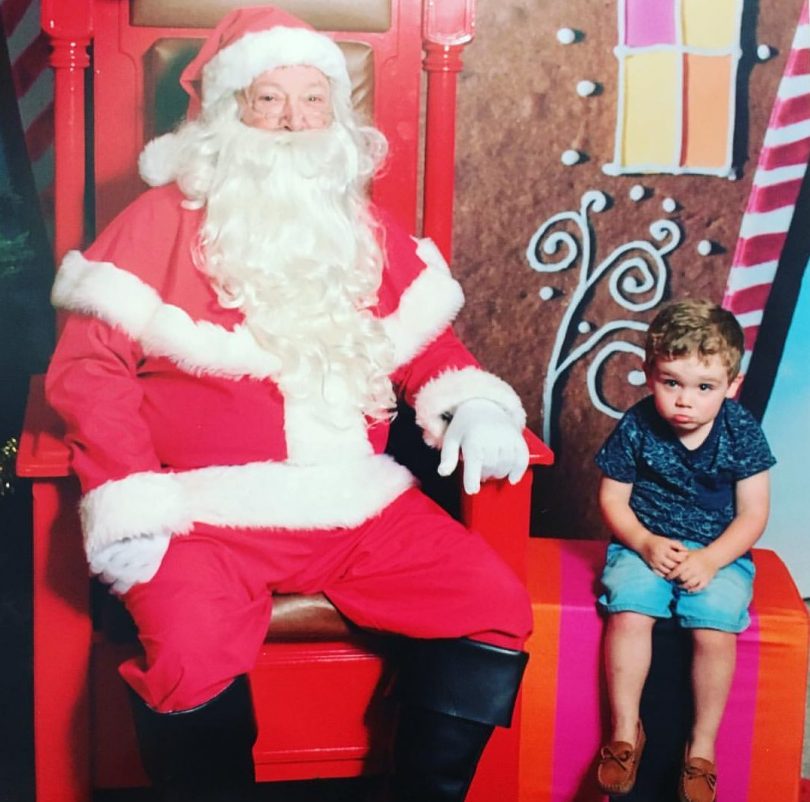 Christmas: where the best-laid plans can easily be derailed. Photo: Supplied.

It’s fair to say that emotions are running somewhat higher than usual this year as we head into Christmas. Two years of the pandemic and the chaotic spread of Omicron has cast a shadow over what would ordinarily be a relaxed and positive time, moseying along to the end of the year.

You only have to poke your head into the Canberra Centre to see the edgy energy and hysteria at play. I spent a stressful hour trying to purchase presents and found myself surrounded by Canberrans doggedly focused on making it a merry Christmas, despite the exhausted expressions that framed almost every face.

People were pushing their trolleys full of toys with glazed eyes, and there wasn’t the usual sense of festive energy. I’m sure I wasn’t the only one opting for more gift cards than usual, unable to think of personal and meaningful gifts after a year of more ups and downs than I’ve ever had before.

So it’s fair to say that the usual emotional reserves people draw on to deal with their friends and family over Christmas are maybe a little lower than in past years. And COVID or not, in most families, there has always been that one person who ruins Christmas.

Maybe it’s the spoiled child who cries when they unwrap a present not to their liking. Or the racist/homophobic/sexist aunt or uncle who has to be tolerated and diffused like an overactive explosive before they shower detritus over the lunch table. Or the feuding siblings or cousins who are forced to interact once a year, cushioned by the goodwill of their relatives.

I’ve already heard from frustrated friends and colleagues about their resolve going into Christmas celebrations to not bite when their father/mother/grandparents make a dig about their life choices or lack of a romantic partner. One friend told me with a sigh that he and his family will be skipping family Christmas this year because, as it turns out, there are a great many anti-vaxxers in his extended clan that he wasn’t aware of pre-COVID and they’re not willing to risk catching the virus for the sake of the holiday.

Other friends have admitted that, after two years of basically only seeing their family members while stuck with travel restrictions in their home city, they’re escaping to sunnier climes to enjoy the holidays, thus ruining everyone else’s Christmas by breaking tradition.

It’s easy for me to commiserate with friends without meaningfully engaging because I have a very easy trot through Christmas. My family doesn’t celebrate it, so I hang at the beach with my partner’s family, who are genuinely delightful people. The only Christmases I’ve had with my in-laws have been pleasant and relaxed, with no arguments, controversy, guilt or martyrdom in sight. Maybe the only tension that occurs is over a round of Trivial Pursuit (which I intend to win this year, having recently invested in a 2000’s edition).

But not everyone is so lucky. So how should we manage the difficult conversations and offensive characters who we might find crowding the Christmas table this year? How do you escape Christmas unscathed by the trauma of a debate about vaccinations, travel restrictions and stalling Omicron?

My advice (as someone who does find herself in ‘robust discussions’ regularly about controversial topics) is to maybe preserve your mental health first and let a few doozies slide this year. In the interests of having a break, connecting with family and staying sane, it might be best to occasionally shrug off the offensive comments from the relative who’s had a few too many beers or to nod and smile while your sibling relates their recent discovery of [insert alternative health regime here].

There is always at least one person who ruins Christmas, but this year, you can ensure it’s not you.

I appreciate your work Zoya. I prefer yule to Christmas 😊

A time to reflect on the cycles of nature and the bounty nature provides. A time when we can all celebrate our common humanity and acknowledge our shared joys and challenges. 💚

Dear Zoya, You may wish to be all joy and fake smiles and grit your teeth when a rellie decides to say that nasty little thing to you, they say each year because they are simply a nasty little person, but................. I will proudly use my nearly six decades of training to sit that nasty little rellie where they belong, even if it ruins Christmas for them... Merry Christmas 😁

Has over the top pressure from corporate advertising and the quest for more objects actually ruined Xmas? Perhaps seasons goodwill should be practiced all year. Is but a thought.

Sandra Carle - 1 minute ago
Tasmynee Carle must get one of these... View
Community 91

Mathew Mendo - 2 minutes ago
Live and let live, helps the economy more than the flower show. View
Jackie White - 8 minutes ago
Kris Peralta the sad fact is that these people don't confine their antics to the Summernats venue - even when Summernats is o... View
Jackie White - 12 minutes ago
Leah Mullaney You want people to stop 'whinging'? The answer is simple: keep your stench of burning rubber and the noise of b... View
News 240

Jazzy Dhooria - 2 minutes ago
It's not a fair assessment so long as it doesn't happen to you. View
Laura Bee - 5 minutes ago
I can't believe people seriously blame the gum trees. Gum trees in their natural environment develop symbiotic relationships... View
Frank Calipari - 9 minutes ago
James Forge I’m talking about tree pruning & trees that fall during wind, rain & storms not the falling of leaves. Though t... View
Lifestyle 6

TimboinOz - 3 hours ago
We have two large grey-black recycled-plastic worm farms. Much less work than composting, no turning, effectively zero smells... View
Sue Danaher - 3 hours ago
What on earth do people put in their bins? How can they generate so much waste after removing recyclables and food waste. How... View
News 4

With over 6000 current cases of COVID-19 active in the Canberra community and even more in the surrounding region of...
News 238

Following the recent storms which tore through large swathes of the Belconnen and Gungahlin region, many residents have voiced their...
*Results are based on activity within last 7 days

I know it’s a generalisation, but many Canberra residents appear to have an uncomfortable relationship with anything to do with...
News 238

Before Christmas, I tried to be optimistic as the country, led by Prime Minister Scott Morrison and his NSW acolyte...
Community 90