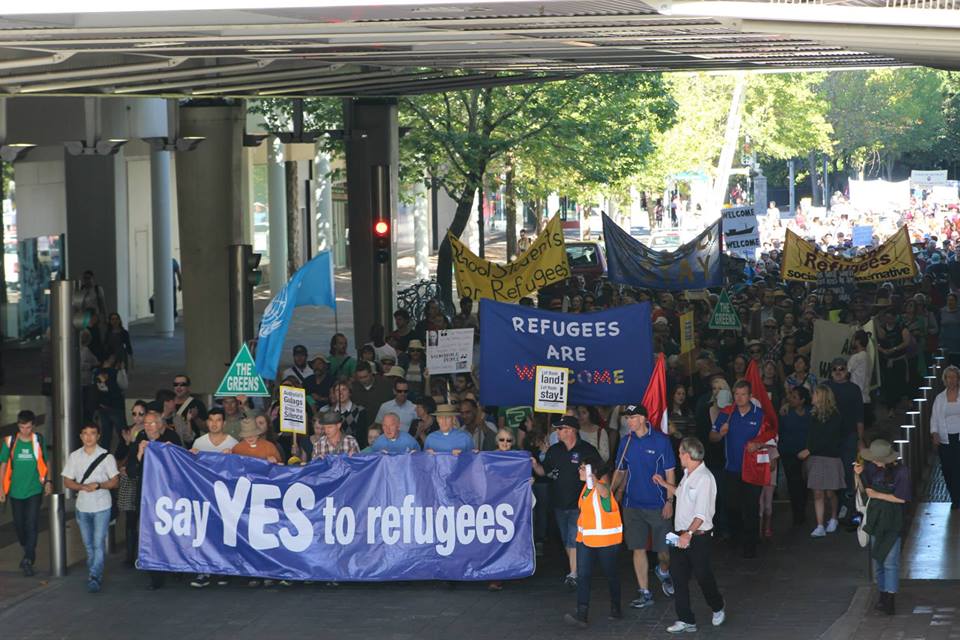 Thousands of people from Canberra and beyond are expected to converge on Civic Square at 1pm on Sunday April 9 for a demonstration supporting the rights of refugees in Australia’s offshore detention centres.

The rally is being organised by the Canberra Refugee Action Committee, with the theme Welcome Refugees, Close the Camps!

A vigil will be held in the 48 hours prior to the rally, starting at 1pm on Friday April 7 in Civic Square (in front of the ACT Legislative Assembly). There’ll be marquees and information boards for those wanting to learn more about the crisis and how they can help, and ongoing activities and entertainment including a festival of short topical films on the Friday night, and performances by local musicians and writers who support the cause on Saturday night.

Dr John Minns, a spokesperson for the Canberra Refugee Action Committee, says “It’s an incredibly important current issue that needs to stay top of mind – especially for our politicians. This (the rally on Sunday April 9) will show how strongly Canberrans support the need for better treatment of refugees.”

Of the refugee crisis, Dr Minns says, “We are the only country in the world where tax payers fund offshore detention centres to be run by private corporations. Many of the asylum seekers have been there for nearly 4 years, and they simply cannot return to their country of origin as they are genuine refugees and legitimately fear for their lives. The Australian government refuses to process their claim for asylum, and leaves them in terrible conditions where their health and mental wellbeing continues to suffer.

“The proposed deal for the United States to accept some of our refugees is not a viable solution. There are too many ifs and buts. We have no idea how many they will take, and their new extreme vetting policies make progress very difficult.

“There have been numerous reports from the United Nations High Commissioner for Refugees, the Australian Human Rights Commission, Amnesty International, countless whistleblowers, and leaked incident files directly from Nauru that have documented how awful these places are. No one should be living in them, let alone people who have suffered so much at the hands of their own governments.”

The rally is being supported by contingents from local church and faith groups, unions, university and high school students and teachers, and the LGBTI community.

All contingents will meet at Petrie Plaza (next to the children’s roundabout) at 12:30pm on Sunday April 9, and march together towards Civic Square where the official demonstration begins at 1pm.

“Anyone is welcome to join the contingents at 12:30pm, and march with them to Civic Square,” says Dr Minns. “We are promoting a peaceful rally, with an emphasis on creating fast and lasting changes to this inhumane government policy.”

Canberrans are urged to show support by attending any of the following: