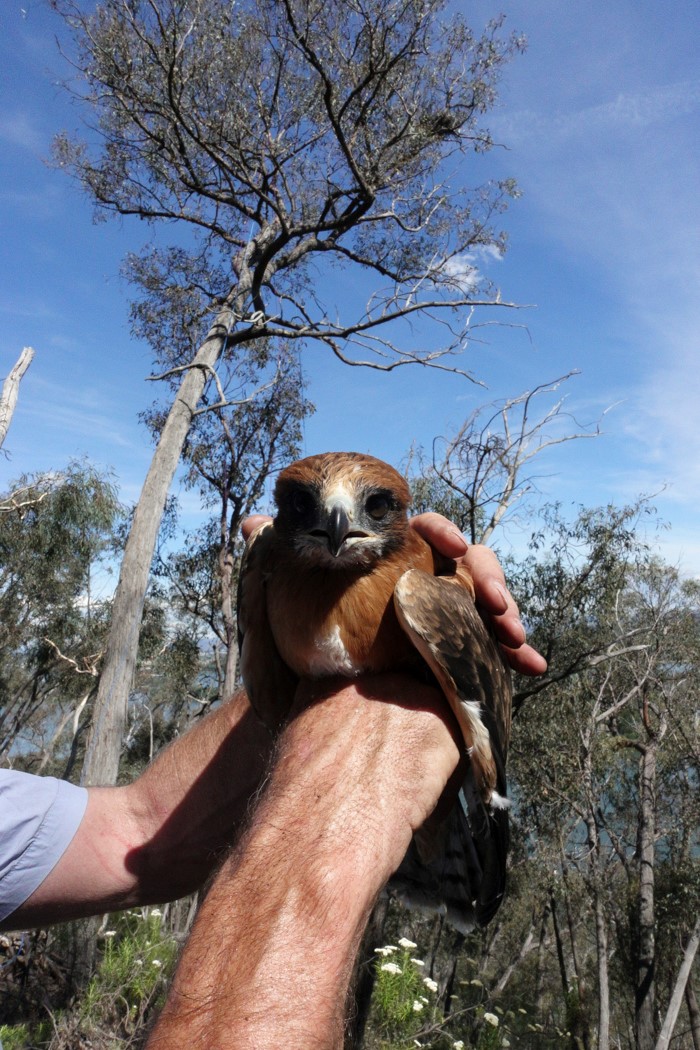 The threatened Little Eagle is flying high in the ACT conservation stakes with a collaborative research effort to monitor the small stocky bird finding at least nine nesting pairs in the Territory during the 2017-18 breeding season.

ACT Conservator for Flora and Fauna, Ian Walker, said the team of ACT researchers has also monitored a record number of four chicks being reared as they work to see a viable population of Little Eagles established in the area.

“Six of the pairs laid eggs and four chicks were reared—one each from two nests and two from another,” Mr Walker said.

“This is the highest annual number of egg-laying pairs recorded in recent years in the ACT.

“Although this does reflect a greater search effort, it is nevertheless exciting and indicates that the eagle is doing better than we feared,” he said.

“The researchers also observed another two pairs of Little Eagles, but breeding activity was not confirmed. Two nesting pairs in nearby NSW also hatched chicks.

“All these nesting areas will be monitored in future to build a thorough knowledge of the breeding ecology of Little Eagles in the ACT and surrounding NSW so we can help maintain a long-term viable population of the eagles in our district.”

The ACT research group includes researchers from the Australian National University, ACT Government, CSIRO and the Ginninderry development project. A Little Eagle researcher from the University of New England has also recently joined.

“Live webcams were installed above one of the nests prior to the breeding season to record the eagles’ nesting habits and breeding behaviour,” Mr Walker said.

“A pair of eagles took possession of the nest and added fresh material. The male fed the female on the nest and they mated. As many eagles of various species do, the pair then switched nests to lay their eggs about two kilometres away.”

Mr Walker said that out of the four chicks raised, one female chick was fitted with a tracking tag last December.

“The team has been eagerly following her by satellite. She moved increasing distances from her nest as she grew older and stronger, flying over urban areas and visiting several urban nature reserves, sometimes flying up to seven kilometres from her nest area and more than 800 metres above street level,” Mr Walker said.

“Then, on 11 March, at less than six months’ old, she literally flew the nest and is now 1000 kilometres away in south-east Queensland. It will be interesting to see where she goes next and whether she’ll return to Canberra.”

That is amazing that the Little Eagle flew 1000 kilometres. I haven’t seen this species in the Canberra area but the way they are breeding up it won’t be long.

The family of three Wedge-tail Eagles that were for many years nesting near Mt Wanniassa appear to have moved on. I saw plenty of the Wedge-tail variety along the Hume Highway between Yass and Albury last weekend. Magnificent birds .

Eagles are such magnificent birds. As you say, hopefully we will see a lot more Little Eagles in the Canberra area.