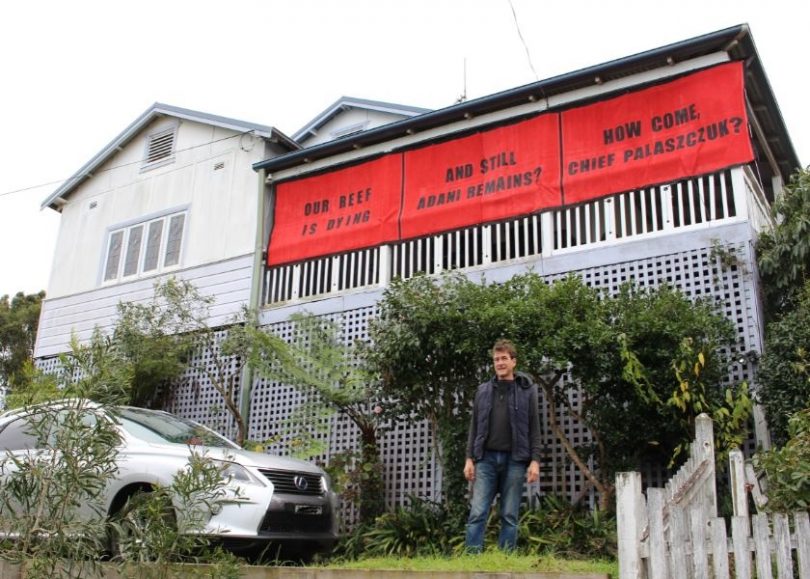 Inspired by an Academy Award-winning movie, Narooma’s Peter Russell has taken a stand against the Adani coal mine planned for Central Queensland.

The “three billboards” on the northern side of Wagonga Inlet will come down this week seven weeks after they first went up.

Mr Russell hopes his message has left a mark on the thousands of motorists that have crossed Narooma’s famous aqua waters since Anzac Day.

The movie tells the story of Mildred Hayes, played by McDormand, who rents three billboards in her town of Ebbing drawing public and police attention to her daughter’s unsolved murder.

Narooma’s Mr Russell has taken the look and design of McDormand’s billboards to poke his local community about the long-running coal mine, rail, and port project slated for central and coastal Queensland.

“I wanted to put a banner up but I didn’t have a clue how to set it out,” he says.

“Then I saw the movie, so I am glad I held off so I adapted the words to fit the topic.

“I do donate regularly to organisations like change.org but this time I thought I’d throw that money into making these billboards,” Mr Russell says. 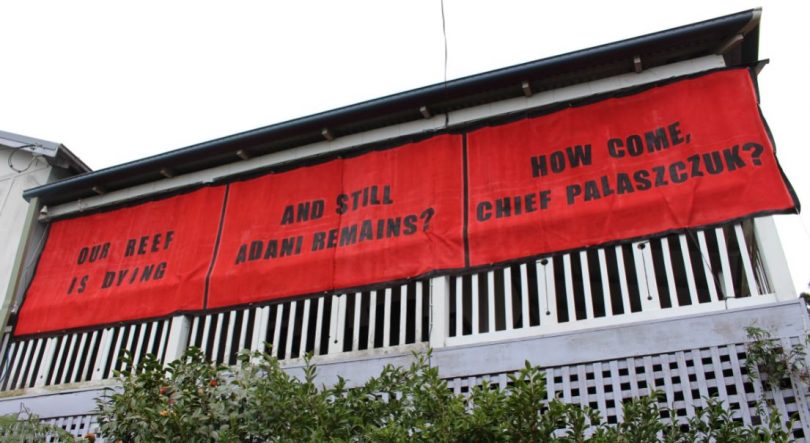 Inspired by the film, Narooma’s Peter Russell makes his point.

In the same way, the movie billboards are a call to action for Ebbing’s Police Chief. The Narooma version calls on Queensland Premier Annastacia Palaszczuk to stop the Adani Carmichael coal mine for the sake of the Great Barrier Reef.

“We are throwing gifts at them [Adani] to dig a huge hole,” Mr Russell says.

“If we are going to be serious about Global Warming, and keeping temperature increases below 2 degrees we have got to stop fossil fuel extraction, that’s the first thing we should be doing.”

The impacts of Global Warming on the Great Barrier Reef continue to be studied but are generally well understood.

The World Wildlife Fund says, “This drastic temperature change can cause ocean acidification and impact dramatically on marine life, as demonstrated by the mass coral bleaching on the Great Barrier Reef.”

“In the first few months of 2016, the Reef experienced the worst coral bleaching event we’ve ever seen, triggered by the mining and burning of fossil fuels like coal and gas,” WWF says.

While The Climate Council says,”[mining] the enormous Galilee coal basin, could take us two-thirds of the way to a two-degree rise in global temperature.”

The drive from Mr Russell’s billboards on Riverview Road to the proposed Adani Carmichael mine site in the Galilee Basin would take 27 hours and cover 2,005km but the retired public servant believes his message is still very relevant to the Eurobodalla.

“Global warming isn’t localised, it will spread no matter where you are, everyone is going to feel the effects.” 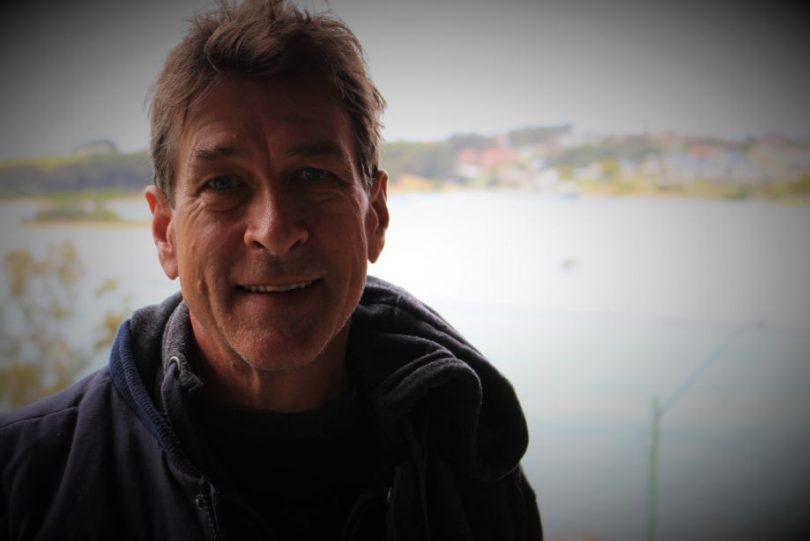 The Indian based Adani has been seeking a billion dollar government loan to build a railway line linking its proposed coal mine to the Abbot Point coal port on the Great Barrier Reef.

Once complete, Carmichael would be Australia’s largest coal mine, with six open-cut pits and up to five underground mines, with a lifespan of between 25 and 60 years.

The Palaszczuk Government says it would veto any grant to the company through the Commonwealth’s Northern Australia Infrastructure Fund; however, it still remains supportive.

In February, SBS reported Ms Palaszczuk saying, “The government supports Adani as long as it financially stacks up. We have been clear about that from day one.”

In March this year, an Adani spokeswoman told the ABC the company remained “100 percent committed to the Carmichael Project and is confident of securing finance.” 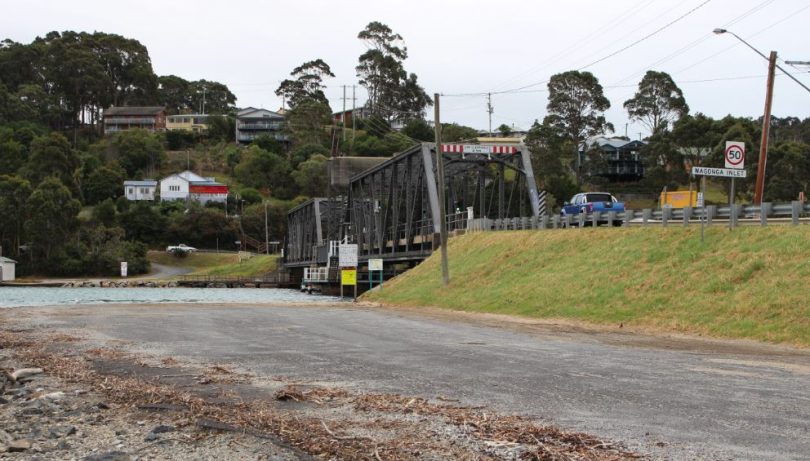 You can’t miss Mr Russell’s three billboards as you head north over the Narooma Bridge.

Adani has secured all the mining and environmental approvals it needs but significant legal and financial challenges remain. For the time being, the vast landscape earmarked remains undeveloped while the campaign to keep it that way continues.

Mr Russell says the response from locals to his addition to the protest has been relatively quiet, but he has appreciated the support from a few passers-by.

When his hand made billboards come down this week, Mr Russell is considering sending them to bigger “Stop Adani” platforms to get greater exposure but he has also left the door open to updating the message in the future. 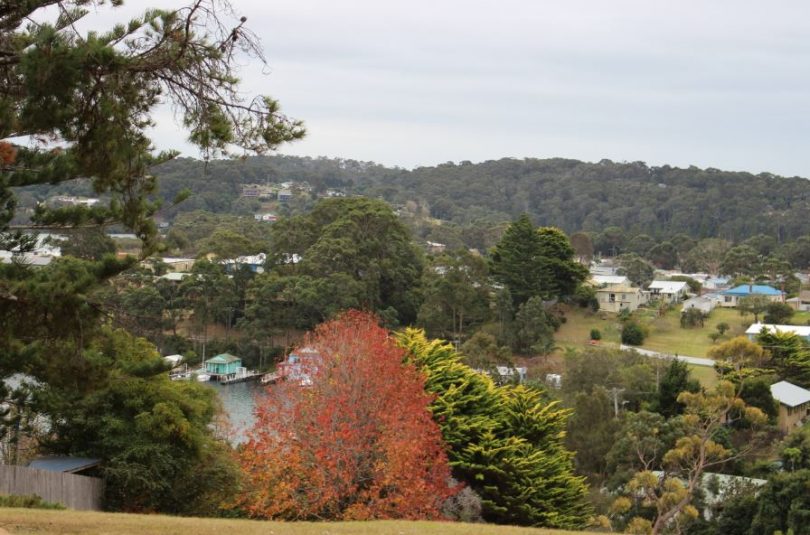 Can you find Narooma’s Three Billboards?

Hey Shiva, your computer which enabled you to make that comment was probably being powered by “dirty” coal generated electricity tonight.

We have some way yet to get to a renewable energy age that can deliver power at all times.

Well done. There is no place for dirty coal in this renewable energy age.