Tis the season to be formal

Who needs Summernats when it’s formal season? Year 12 formals in particular are a parade of hot car after hot car, with the occasional classic and joke arrival thrown in.

So then, what better place to go if you want to defect cars than a school formal? 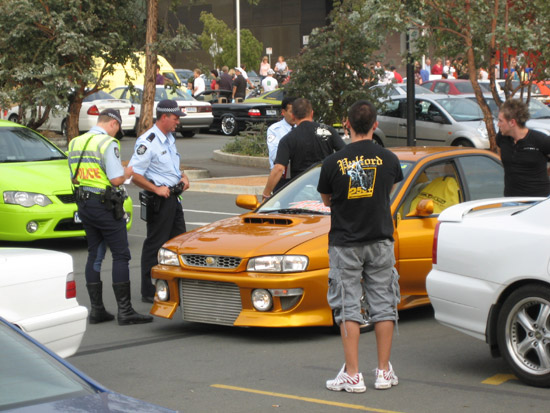 That said, the Hawker College formal tonight had more classic-car arrivals than my formal (though that could have been because of the school I went to). Car watching at formals seems to be great even, attended not just by family but also assorted hangers on and people just there for the spectacle. There were also a significant number of police in attendance as well as security guards directing traffic. 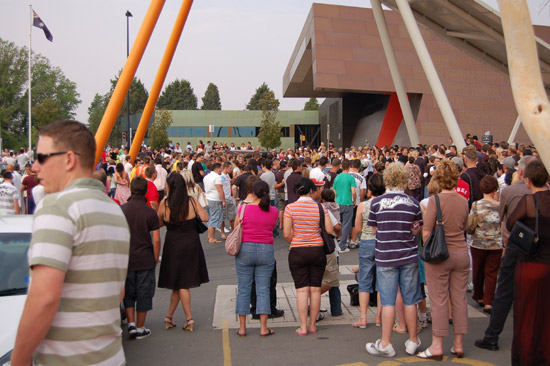 There were way too many cars to photograph, but here are a few highlights. Firstly, the infamous “OnDDole” beemer. 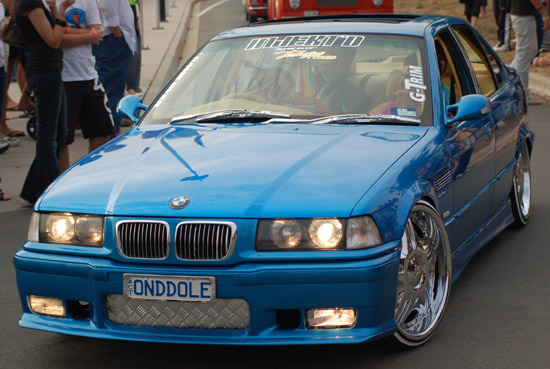 I didn’t know who the Loggods were, but their arrival caused a few giggles. 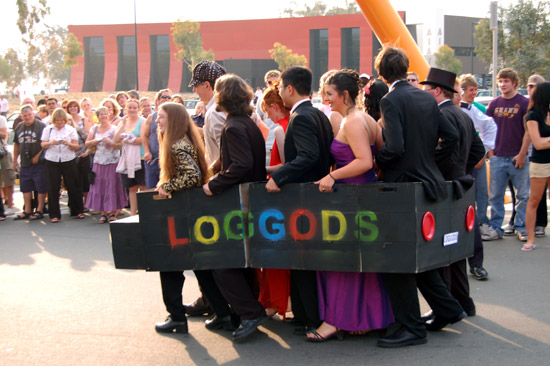 This young lady, on the other hand, dismounted to a round of applause. The girls behind me were trying to dare their boyfriends to go and pull off a towel or two. 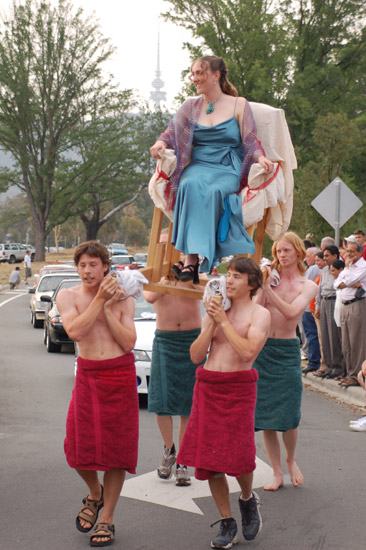 The classic cabriolet beetle was rather cute I thought. 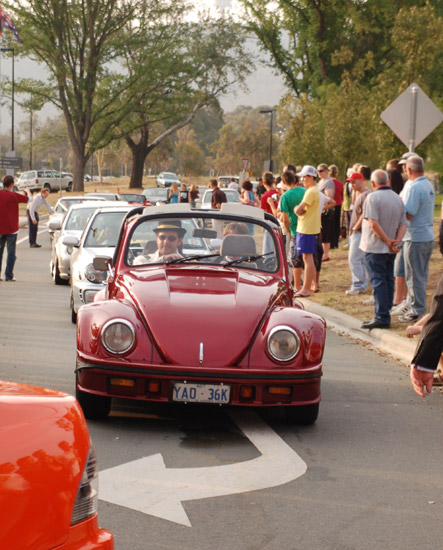 My favourite was the convoy of nine minis, the middle one a cabriolet which had the arriving couple in it. 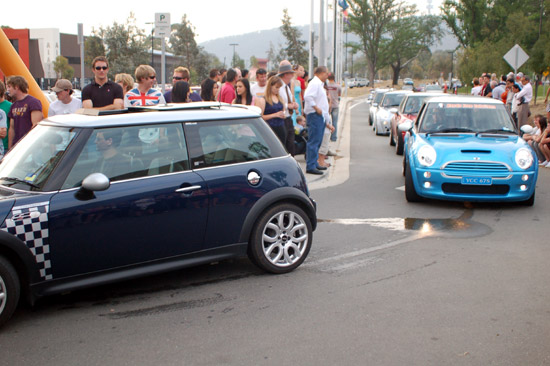 Meanwhile, just over the ridge all Lake Burley Griffin’s swans had gathered for the night, oblivious to the noise and fuss.

I’m conceiving a personality that can only handle a single issue at a time – not that that belies any shortfall in education, there are personality disorders that affect order of precedence.

The world is a better place with this knowledge.

i read it and some of it is right

ill have a look

But you then went on to say ‘But not on our roads.’

I’m guessing you skimmed over my post about 10 replies up then, too.

if done right under stand

So it’s safer, but at the same time it isn’t?

a lowered vehicle IF done right is safer than Standard vehicle.
But not on our roads.
and i have seen a green ute that must of had air shocks driving on monaro highway the back was so low it was like he had none.

â€œCan an example be shown that defecting a vehicle for being too low has contributed one iota to the greater wellbeing of society?â€

I recall that highway patrol episode where a lowered vehicle caused an accident due to the instability of the modified vehicle.
AS a defected vehicle would be off the road it wouldn’t have the opportunity to kill. Therefore, the contribution cannot be measured. Bit of an asshat question really.

the pics on this page

What camera was used for what, Jim?

what camera was use

And i have been building cars and hot rods since i was 15.
and own a 72 stingray

Danman
Shouldnâ€™t th ecops
justdoing their jobin
Your got no idea of what you are talking about.
The police only target were they can make money like the school formal.
the dont can to area were there is real problems as i costs more to get a conviction.
We have road rage ,speeding,bad driving every day.
And like i said BEFORE just got to monaro high way,or the tuggernang express way and watch the speeding EVERY DAY.
SO PEOPLE THAT DO THE RIGH THING ARE SICK OF THE POLICE DOING NOTHING IN THE TROUBLE AREA.
from jim

El,
You are 100 percent correct, and I should certainly have singled out these nerds on the bumpstops.

Look, I don’t have a problem with hotting up cars, and did quite a bit of it myself through my teenage years.

Drivers of lowered and modified cars when *DONE PROPERLY* won’t generally have issues with the cops and defect notices.

Idiots who lower their cars dodgily (ie cut springs) to the point where they’re resting on the bump stops (and yes, I _have_ actually seen this more than a couple of times) are causing a danger to themselves and others by having insufficient suspension travel (not to mention *completely* arse-ing up the steering geometry) to keep any kind of decent handling/ride/steering control on the variable quality public roads.

Of course, on the flip side, if the owner has invested in aftermarket lowered springs, shocks and swaybars, not to mention the huge amount of big brake stuff which has flooded onto the market, the car will handle and stop better than it ever could have in factory trim.

Just my 2c, anyway. “Do it once, do it right the first time” is great advice, IMHO.

Binker,
You are perhaps shortchanging the data that shows seatbelts do save lives. Quite simply, I believe only a mug would not wear a seatbelt whilst travelling in a motor vehicle.
To then extend this lack of solid evidence to any variation from manufacturers specification, and intimating it could cause the same serious, if not fatal result, is taking the arguement way too far.
Proponents of vehicle modification come from many sources. The majority are the younger generation, and low,loud and fast seem to be the written word.
(In my day,loud,(as in doof doof),was missing). That their vehicles are low, loud and fast, and therefore antisocial says more about our police force and their political masters than the evolution of hot cars. For heavens sake, my generation have been hotting up cars for the last 40 years. Why can’t these young blokes test their skills?

A cop is not one size fits all.

There are dedicated departments within and external to th epolice that deal with the higher issues such as drug trafficking – people trafficking for sexual exploitation – serious organised crime etc.

And then there are your beat police.

Sure they are entertwined – but each has their job to do and they do it well.

Its funny that no one ever complains when the police help them, its only when they get the short end – they then complain.

Besides – by definition of law – things you may consider petty ie defecting cars – fining for not wearing a sealtbelt – these rules are there to protect not only yourself but the wider community.

Its so juvenile to bitch an moan about guys who are justdoing their jobin protecting the community.

If you break the law – then you are a real criminal – the only difference may be in sentencing – but if you dont wear a seatbelt or drink drive – or if you import a container load of gammahydroxybutyrate your still breaking the law – no such thing as “real criminals” your either breaking the law or not. Its black and white.

“Can an example be shown that defecting a vehicle for being too low has contributed one iota to the greater wellbeing of society?”

Presumably limitations on ride height etc are for safety purposes (being mechanically challenged I have no idea but there would be little other legitimate purpose in such regulation). Mortality/morbidity affects us all. Society invests in an individual through education health care etc and should that person die early then the return on this investment is not fully realised. Should the person not die but become disabled not only is societies investment not realised but further costs to society occur through health care and social security costs (sure the insurance company may cover some of it but it will never cover all of it).

Further, a police presence at events which involve young exuberant people, alcohol and cars (formals) in itself is likely to dampen the propensity for stupid life endangering behaviour and so serves a useful ancillary to removing unsafe vehicles from the road.

Shirley Troy - 18 minutes ago
Hope the strengths of community spirit ,awareness and support continue when this Crisis is over. View
Scott Bowen - 11 hours ago
This is amazing news! View
Anne Atherton - 19 hours ago
Love our community spirit View
Property 46