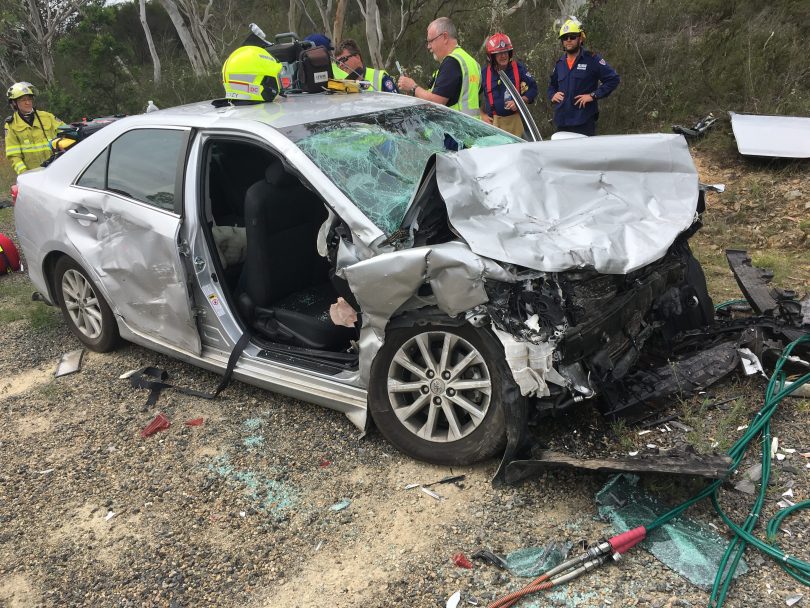 The vehicle TJ and Alanna were cut from after the accident in 2017. Photo: Supplied.

Last week, Thomas (TJ) Campagna began his driving experience when he earned his learner’s permit. He hasn’t driven outside his home street yet but it is a tentative first step.

On 19 December 2017, TJ nearly had his life taken away from him when a drug-affected driver collided with the car his mother, Alanna Davis, was driving on the Kings Highway, 16km from Braidwood, while heading to the South Coast for a beach holiday.

Five people were taken to hospital. TJ was airlifted to Canberra Hospital where he underwent emergency surgery to repair a perforated bowel, fractured ribs, a collapsed lung, damage to his teeth and shoulder, and the loss of his appendix and abdominal muscle.

A talented rugby player, TJ’s recovery has captured the hearts of people in the ACT region, from sporting greats to heroic medical teams and specialists.

A dearth of recent stories about road users being caught driving at alarming speeds has triggered Alanna, who will always remember the horror of seeing her 13-year-old son in enormous pain minutes immediately the crash.

“During the past few weeks, I’ve read with great distress about an alarming level of people speeding or driving impaired,” she says. “And then I was silly enough to read social media commentators whinge about it just being revenue raising.

“Last year, I read a comment on social media and I couldn’t believe it. This user made his comment on the NSW Roads Facebook page on a post about not speeding during the holiday period. The user wrote words to the effect of, ‘NSW Police, ruining people’s holidays’. When did this sort of comment become a reality for our community?

“We were going on holiday when our crash happened. The woman who has now been convicted of drug-driving when she caused our crash wasn’t on holidays. She was actually on her way home from court for another drug-driving charge.

“The only person who ruined our holiday was that woman. Not the police.” 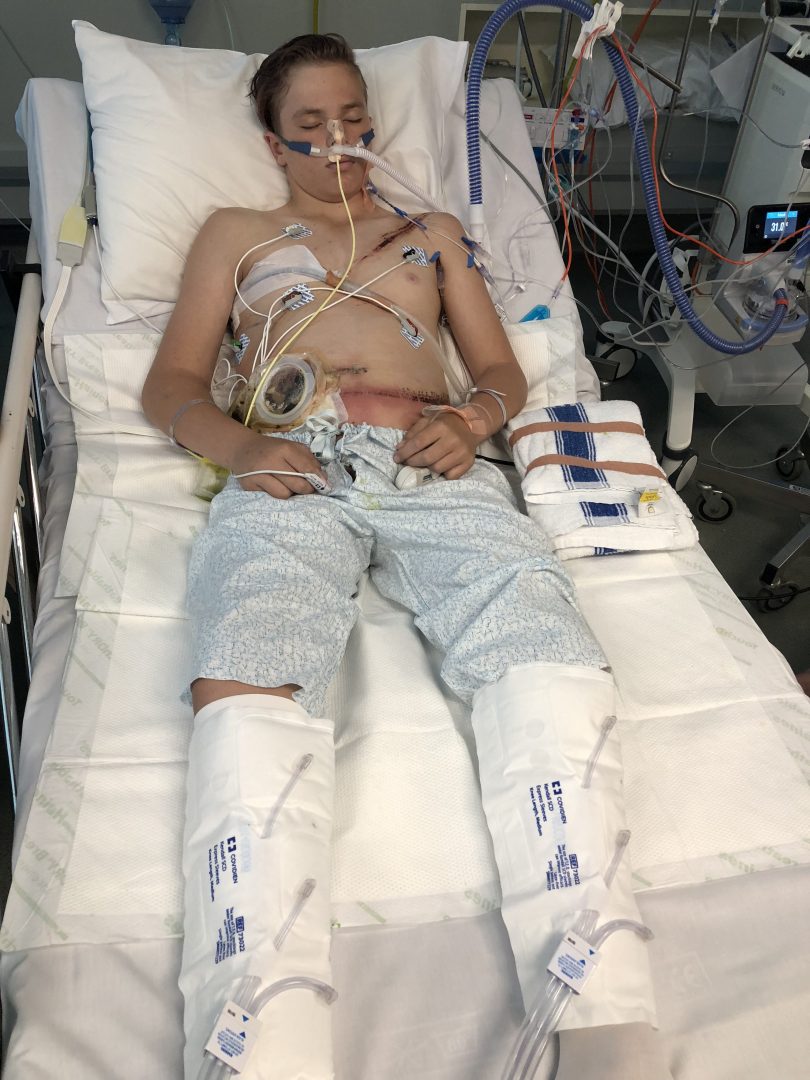 Alanna is understandably passionate about road users who treat their licence as a right.

“When we get our licence, we are making a commitment,” she says. “If you can’t live up to that commitment, go surrender your licence right now. You don’t deserve it.”

TJ has made many sacrifices in his journey to get behind the wheel, including missing almost two years of school, forgoing representing ACT in rugby union, overseas rugby trips, school camps and swimming with his friends. He went from being a perfectly healthy teenager to fighting for his life during five surgeries.

Alanna says that not being “caught” breaking the road rules doesn’t make it OK, it just means you’re lucky.

“It shouldn’t be up to the police to be out on our roads 24/7 with speed cameras, operating a RBT or just being around,” she says. “It’s actually up to all road users to do the right thing.”

Alanna also poses a couple of very pertinent questions: why are motorists more worried about fines than life on our roads? And why do we blame road rules, police or governments for receiving a fine?

“The only reason you get a fine or [demerit] point loss instead of prison time is because nobody was injured, or worse, died,” she says. “It’s nothing that you did better; it’s just pure luck you got caught before you ruined someone else’s life. Or took it.”

Alanna also battles a legacy far beyond the injuries to her son and the massive contusion on her stomach from the seatbelt that saved her life. Insurance companies ask what injuries her son has and who was responsible. She asks herself more questions than she has the answers to.

She also has some very sobering words.

“I’d also rather you arrived 15 minutes late than not at all. I promise you, the world will absolutely not end if you abide by the speed limit and arrive alive.

“Let’s work to change our attitudes, to challenge our friends and family to do the right thing on our roads. It won’t harm anyone by doing the right thing. 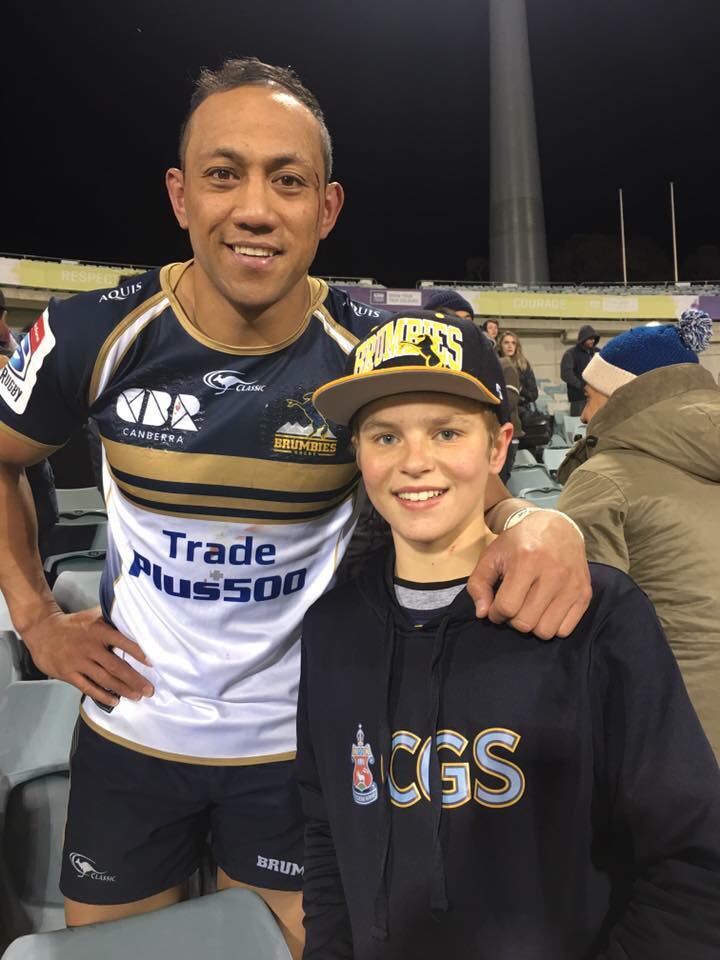 TJ with Christian Lealiifano from the Brumbies, who is his “biggest hero”. Photo: Supplied.

Hans Dimpel - 6 minutes ago
Are there any local Canberra/Queanbeyan veggie garden pages or groups? I find most online stuff is international or national.... View
Opinion 74

Anna Ji - 34 minutes ago
He deserves a pedestal for his sport. His views should not impact that, especially when it's just his perceived views by one... View
Vasa Krculj - 37 minutes ago
Novak, a great sportsman and a generous human being who donated $1 mil. to the NSW bushfire victims. He must be the first spo... View
JC - 39 minutes ago
Visa and ability to enter the country are two different things. Being vaccinated for covid is not a requirement for being gra... View
Community 107

Steve Aust - 1 hour ago
Colin Parton tell 1 story here View
Capital Retro - 1 hour ago
The letters "SM" stand for "Self Managed". It baffles me why people set up SMSFs and then pay someone else to run the investm... View
Louise Flint - 2 hours ago
James Daniels I was sent there for advice before I took a redundancy package. They ignored my superannuation and taxation que... View
News 22

Acton - 9 hours ago
The outer pine forests fueled the approaching firestorm but it was the gum trees within the suburbs that caught alight and sp... View
phydeaux - 12 hours ago
“The plantation” of 2001 is not “the plantation” of 2003. The former is now the Arboretum and some Molonglo suburbs.... View
Opinion 144

Shoppers might be contending with increasingly bare shelves as increasing numbers of workers find themselves in isolation due to COVID-19,...
News 278

Before Christmas, I tried to be optimistic as the country, led by Prime Minister Scott Morrison and his NSW acolyte...
Opinion 74

@the_riotact @The_RiotACT
You're #vaccinated and #boosted, you wear a mask, socially distance, wash your hands and sanitise, but as Zoya Patel discovered, you can do all the right things and still get #COVID https://t.co/LTSsyklfol (32 minutes ago)

@the_riotact @The_RiotACT
There's plenty of #livemusic around the capital this week, including #bands, singers, jazz and a swansong (it's your last chance to hear Jack Phemister & The Wine Tasters). Whatever you do, though, check with venues to avoid last-minute changes https://t.co/kK4B1DuBt3 (11 hours ago)