Toad and Mandy the toast of the Bega Valley 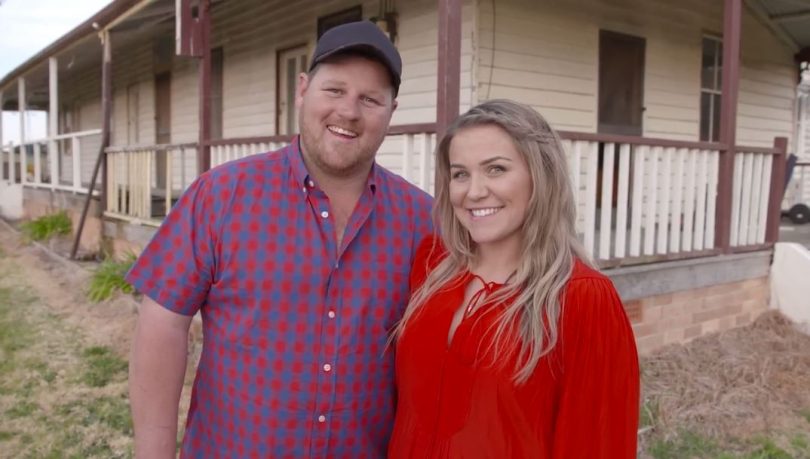 And the winner is – Toad and Mandy. Photo: Channel 7.

A cheer to rival a ‘Blues’ State of Origin win went up around the Bega Valley on Monday night as the region rejoiced in the success of Toad and Mandy in Channel Seven’s hit show – House Rules.

Home for the couple and their 18-month-old twins, Lenny and Layla, was a 150-year-old run-down inn on a dairy farm at Candelo, south-west of Bega.

Before the TV show came to town, the 11 doors on the outside of their home rattled in the wind, and Mandy says it was freezing in winter. “Only parts of it were insulated” and to get to the bathroom, “we had to walk across the deck and, in minus degrees, it’s not very nice.”

With a one-point win over their Queensland rivals Mel and Dave, life changed for Toad and Mandy, claiming $355,000 and a fully renovated house.

Before the win, the couple who are in their late twenties and early thirties, were feeling the pressure of a mortgage. “Nothing like a debt to get you out of bed,” Toad says.

That changed at around 9 pm Monday night, relief that brought the couple and their family to tears as the judges made the call.

Speaking to Sunrise on the morning after their big win, Mandy, a qualified beautician spoke of using the money to open a salon, but getting married was the first priority.

Toad says the win came with a lot of hard work, “For the first few renos we were awake till 2 o’clock in the morning, then you had to be up at 5 to be on site at 6.”

“We didn’t get much sleep trying to plan everything and make it the best for the homeowner – it was full on but worth it.”

The “get along and get on with it” attitude of the couple endeared Toad and Mandy to many; local pride is as big as the region’s cheesemaking history. Viewers appreciated seeing good people come out on top and country warmth and charm win through.

Debbie Volgyesi – “They were so good all the way through, they deserved to win.”

Jeanette Atkins – “That’s excellent!! Congratulations!!! So nice to have a feel-good story about our beautiful corner of the world.”

Jan Treadwell – “Great to see the “good guys” named as winners – they can now enjoy all the rewards for their hard work – Congratulations!”

And Carol Healey writes, “Congratulations Toad and Mandy, lovely to see the most genuine couple win!”

However, the show did ruffle some feathers when contestants arrived to make over Toad and Mandy’s home and promptly headed up Brown Mountain to Canberra for a bigger shopping experience. In the end, a number of local businesses did benefit and enjoyed being involved.

Simone Villaroel runs Pretty on the Inside in Merimbula and helped Mel and Dave as well as Chiara and David with a range of homewares.

“They took things for the children’s rooms, the scullery, and the dining area, they were great to deal with,” Simone says.

From a business perspective, Simone says the exposure led to a number of online sales and has raised the profile of the business locally.

“I will say, however, when the show featured Toad and Mandy’s house they kept emphasizing that the closest shopping centre was in Canberra – that was a little disappointing,” she says.

“I actually emailed Channel Seven about it, I understand they were under pressure from key sponsors, but they could have worded it differently.”

Local carpenter Lachie Ellicott from Above and Beyond Contracting was one of about twenty local tradies brought in at the end by Bega Valley contractor Mark Hart to work on the grand final makeover of Toad and Mandy’s front exterior.

“It all went pretty smoothly, considering I worked on the deck framing and me and my offsider built most of the picket fence, and I hung “that chair” on the verandah,” Lachie says.

“It was amazing to be a part of, I’d do it again anytime, it’s good that they used local trades and it’s been great exposure for the town.

“And I am happy Toad and Mandy won in the end even though we were working for the opposition.” Mel and Dave from House Rules shopping at The Hub in Bega with shop assistant Mel McGrath. Photo: The Hub Facebook.

The Hub Home Trader on Bega’s main street was also approached to be a supplier to the show and co-owner Amanda Twyford says it was lots of fun.

“We had Kristie and Leigh come in, Mel and Dave, and Josh and Brendan,” Amanda says.

“They bought cushions and artwork, a nice pot, a clock for the wall, and a few other bits and pieces.”

Amanda says the rules of the competition meant she couldn’t give them too much advice or help, “they had to do most of it alone.”

“We have had lots of people coming in to spot what was on the show, we are so happy for Toad and Mandy, they totally deserved it.”

Monday night’s House Rules final attracted 853,000 viewers, which climbed to 915,000 for the announcement of Toad and Mandy as the winner.

they were my favourite couple as well...Huge Congratulations to them. Debbie Lewis Kerryn Prasad

I was so happy to see this couple win. Niceness defeats evil! :)

From your neck of the woods Cheryl Helmers

Yep...shame it wasn’t aired over here☹️Well done to them anyway!👋👋

Aren't you from Candelo Sheree Walsh?

Yes, Bev knows then better than I.

George Parker just thought you might not have seen this.

I was about to tag you in this too!

So very happy that they won. What a beautiful couple.

That money will just about cover the feed bill.

You haven't been listening to the news I'm in the Bega Valley and it's not real good, between the stock, the roo's and the deer thee's not a lot of feed on the ground.

Chelle Belle - 3 hours ago
I agree the vacant hospital should be used for addressing low to medium mental health issues. Problem is getting the psychiat... View
Anne Christoff Frampton - 1 day ago
Jarrod Male please don’t blame yourself.teenagers needing help can be very stubborn and refuse any help and what are we as... View
Kay Jones - 1 day ago
Jarrod Male yes it's very hard View
News 49

The House Rules journey: Our region’s newest celebrities talk about the challenges, the prize money and why they don’t feel famous

Get hands on with Bega Valley koala research, volunteer training this Saturday

@The_RiotACT @The_RiotACT
Thinking of buying or renovating: A blindsided Andrew Barr has taken aim at the one-size-fits all approach of the Federal Government's stimulus package for the housing sector, warning it is too generous and may jack up house prices https://t.co/XgVdOjnX0o (32 minutes ago)

@The_RiotACT @The_RiotACT
The ACT Government's plans for a small car park opposite Cooleman Court in Weston that will cost more than $600,000 is fast becoming a political hot potato for Transport and City Services Minister Chris Steel https://t.co/zn39fiNsMu (2 hours ago)