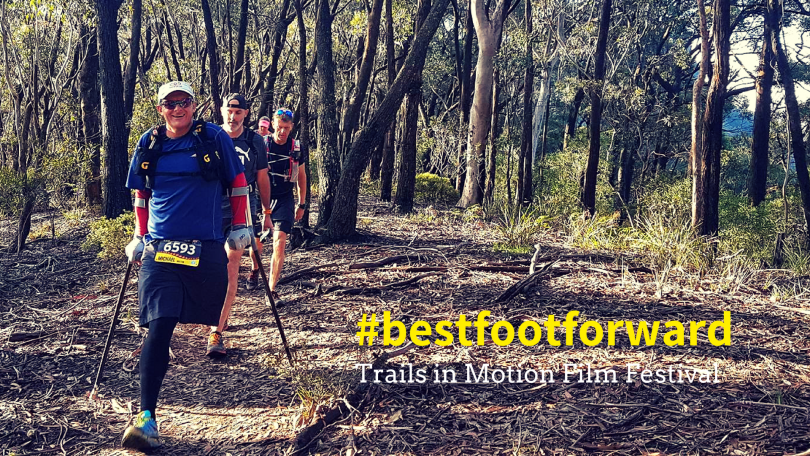 Michael Milton on the trail in the 2017 UTA event in the Blue Mountains. Photo: Supplied.

A 50-kilometre cross-country run would test most people but try it on crutches with one leg.

Canberra’s Michael Milton has made a habit of these types of feats but even the former Paralympic skier came to the Ultra-Trail Australia (UTA) race in the Blue Mountains with doubts about his ability to finish his first ultra-marathon.

“So yeah, I’ve got something to prove to myself that I can. I like to challenge myself, I believe as somebody who lives in luxurious Canberra and sleeps in a really comfy bed overnight and has hot and cold running water that I’m not as tough and resilient as I could be and I guess these sorts of challenges can develop those sorts of skills and I can have fun at the same time. Not the sort of fun that everyone enjoys but I certainly do,” he said.

The story of his 2017 run has been captured in a documentary, Best Foot Forward, showing this week as one of eight films at the Trails in Motion Film Festival at the Palace Electric Cinema on Monday 18 June and Tuesday 19 June.

The Festival is an annual international film tour showcasing a collection of the finest trail and ultra running films with amazing cinematography and inspirational stories from South Africa, the US, Canada and Australia.

Best Foot Forward gives the Festival a firm Canberra imprint, with Milton competing in an event owned by a Canberra-based adventure company and the film also made by local producer-director duo Adrian Muscat and Tina Costessi.

Started 11 years ago by Tom Landon-Smith and Alina McMaster from AROC Sport (now AMTL Events), UTA attracts thousands of runners from all over the world every year. The pair are former competitive cross-country skiers, which is how they know Milton, and their young children go to the same school as Milton’s.

“We’ve known Milto for years and followed his career on snow and off. We all catch up at school drop-off and chat about what we’re up to. When he mentioned he’d like to have a go at the 50 kilometre UTA ultra-marathon, we were immediately on board. It was a no-brainer. To have him at our event was a huge win for us but to witness his preparation and then the attempt was a great privilege. He is one stubborn bastard,” Landon-Smith said.

The idea to shoot a film about the attempt was Milton’s and he set about finding a film crew. Enter Muscat and Costessi, budding filmmakers and regular entrants in Lights! Canberra! Action! and the Canberra Film Festival.

“We were in from the first phone call,” said Muscat. “I made the decision early on to run with Michael and film everything which meant I had to train as well because you can’t just turn up on the day and run 50 kilometres carrying a camera.

“Over the months leading up to the event and on numerous training runs, we became friends and running buddies. The actual event was one of the best experiences of my life, running with and filming my friend as he ran 50 kilometre on crutches.”

But it had its moments. On the eve of the race, wet weather forced a course change, which not only meant foreign terrain to that which they had covered in a couple of dry runs but a night finish.

“So to be able to get your head around a totally different course, going through an area that I didn’t know very well, certainly tested our resilience and adaptability,” he said.

Milton spent about five hours running in the dark, head torch lighting the way. “It kind of narrows the focus, not looking at scenery, but at the same time you sometimes lose information, you don’t see the big hill ahead of you which can be a good thing, but you also don’t see the kind of false flat hill that you almost can’t feel. You lose a sense of where you’re going up and down, your position, particularly after your brain goes a bit fuzzy,” he said.

And those moments of doubt remain.

“You get to a point where you start asking yourself, can I continue? Do I think I can make it?” he said. “And the first time you ask it, of course, the answer is yes, bloody oath. But at the same time, you’re unsure how many times you ask yourself those questions before that answer changes. That’s a part of the experience and part of the challenge.”

Milton came away with a stronger body physically and mentally, a few blisters, a couple of fewer toenails, and “a great day out and some amazing memories with good friends”.

He is thrilled with the final product.

“Making a film like this is not easy. It’s time-consuming and demanding but Adrian and Tina did an amazing job. Canberra has a lot of talent, a lot of entrepreneurial drive. You can get anything done here and I love that!” he said

“The festival is not just for runners. There is some amazing scenery in some awesome locations as well as eight incredible stories. They’re kid-friendly and packed with adventure and emotion.”

Milton will attend both screenings and answer questions afterwards.

Tickets can be purchased online at www.trailsinmotion.com.au.