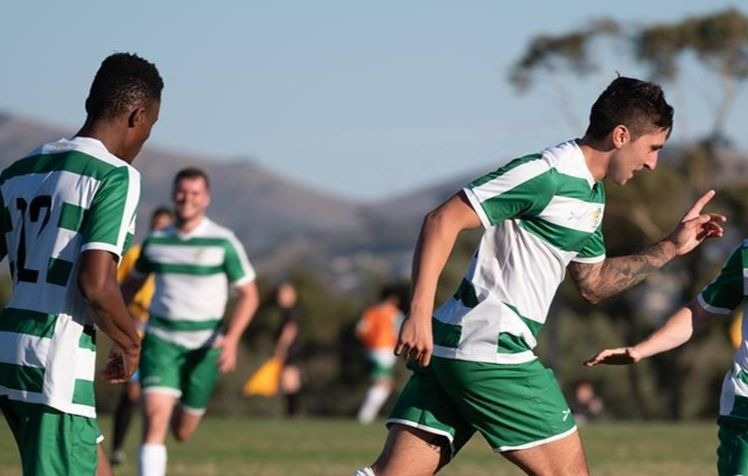 Tuggeranong United is 90 minutes away from ending their 15-year finals drought. Photos: Supplied by Capital Football.

When Mitch Stevens walked into Tuggeranong United football club at the beginning of the 2018 season, he knew the magnitude of the job at hand.

United’s first-year head coach was tasked with steering the club back to the top four for the first time in 15 long years and putting Tuggeranong back on the Canberra footballing map.

He is now 90 minutes away from completing the job, with United currently sitting in third place with 26 points on the NPL ladder and Belconnen United and Tigers FC hot on their heels heading into the final round.

Tuggeranong controls their own destiny and can guarantee their spot by upsetting top of the table Canberra FC at Deakin Stadium on Sunday afternoon. Even if United lose, they could still qualify for finals if other results fall their way.

Walking into the changing rooms for the first time almost a year ago, Stevens immediately identified the club needed a culture change and set about instilling a desire to want nothing less than three points week in and week out.

“The target from the very beginning was to make finals,” Stevens told The RiotACT. “We weren’t content to be just competitive, which I think has been the problem that clubs outside the top four have had in the past.

“We aren’t happy to get one or two good results against the better sides. We wanted to change that mindset. We wanted to win every single game.” 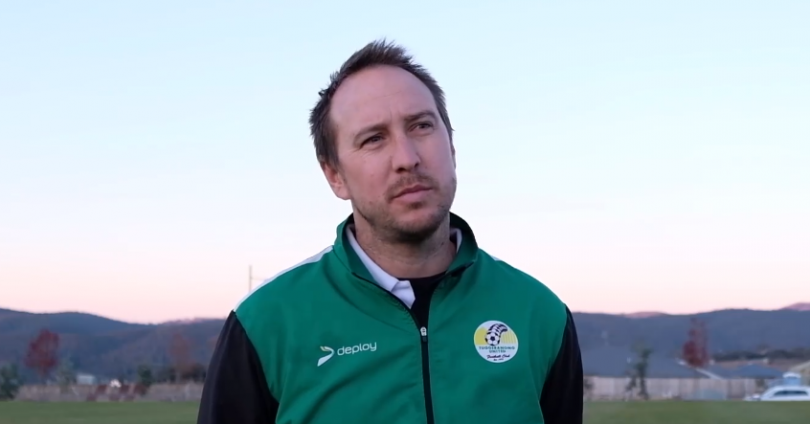 Mitch Stevens came to the club, tasked with bringing finals football back to Tuggeranong United.

Stevens said he was under “no illusions” that the club was desperate to continue their momentum from last season and to go one step further and end their finals football drought. Thanks to the strong playing group he inherited and with a few new additions, the club has pushed on and are now in a position to claim the long-awaited finals spot.

“We sit here, 90 minutes away, knowing that if we win this game, we qualify, so it is entirely in our hands,” Stevens said.

After starting the season flawlessly with four wins from four and sitting top of the league, the side suffered a mid-season slump when they could not string two wins together, in part due to an unsettled squad. 13 players missed five games or more throughout the season, leaving Stevens with a new-look playing group each week.

“Throughout the season, we had to tweak a few things tactically, due to the fact we had a whole lot of players who missed a lot of football at various times throughout the year,” the coach said.

“Around our mid-season slump, we had two really poor performances and unfortunately it happened to be against Belconnen and Tigers, which has come back to bite us now.

“So we went back to the drawing board with a slightly different group to what we had at the start of the season, we looked at what we needed to do differently and that little tweak has changed the way we play, the way we get results – and it has shown in our last couple of wins.”

It is not just the chance to play for silverware that drives Steven’s men, but also the colossal implications a finals appearance would make on the region and the chance to put Tuggeranong United Football Club back on the map.

“We saw last year when Gungahlin United had an outstanding campaign and made the finals and all of a sudden, the ability to recruit ex-AIS graduates and other star players came along,” Stevens said.

“Player recruitment suddenly becomes a little bit easier and people want to be with a successful club. But our club as a whole has a long tradition of producing some wonderful young players and I think it would be a real shot in the arm to produce young players who don’t go on and play for someone else, but stay here and play in the green and white and be successful in the local league.

“In the long run, we want to consolidate our spot and be able to say that we are as good as the clubs around us.”

Thanks for the write up The RiotACT, Mitch and the boys have had an outstanding season and we are all behind our team on Sunday! #TuggiesDestiny

Dan Rayner - 10 hours ago
Katie I had so much practice with you 😂😂😂 View
Katie Licciardo - 11 hours ago
Dan Rayner you love it don’t you View
Andrew Dale - 13 hours ago
Ash Claire dont you know anybody who has had problems with being able to afford to pay their rent. View
News 16

Vera Bachinger - 11 hours ago
So we are going to be the victims of more double dipping.. View
Slobodan Paunovic - 12 hours ago
Marc Edwards don't worry about it, can only be more expensive and some sort of public robbery...they need funds for parties a... View
Tom Adam - 15 hours ago
Jorge, yes I was basing my comments on the current claim. View
Opinion 19

Christie Le Goy - 11 hours ago
George Prasad hooray for you, no wonder you're such a gorgeous family xxxx View
Motoring 37

Stephen Fallon - 14 hours ago
I'm sure every one of these people consider themselves good drivers. If we put a fleet of unmarked police cars on the roads,... View
show more show less
*Results are based on activity within last 7 days

@The_RiotACT @The_RiotACT
The winners have been announced in @iconwater's spring photo competition, with Matt Tomkins taking the top gong for a stunning image of Mulligans Flat https://t.co/r3FL12CLEu (3 hours ago)

@The_RiotACT @The_RiotACT
Two ANU academics have claimed that it was only by "good luck" that flaws in the ACT's electronic voting system did not impact the final vote https://t.co/EOE1MfZeLC (6 hours ago)

@The_RiotACT @The_RiotACT
A woman in her 20's who arrived in Canberra this week on a repatriation flight has tested positive to COVID-19 while in quarantine https://t.co/8XHzMT3QbB (7 hours ago)