Turn back time as daylight saving ends this Sunday 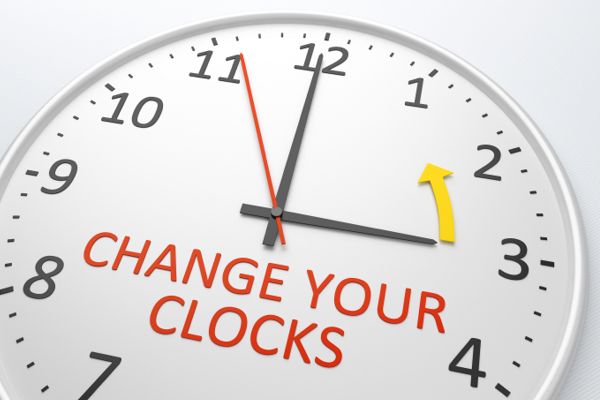 Turn your clocks back and check your smoke alarms for the end of daylight saving this Sunday. Photo: File.

Do you wish you could turn back time?

For people in the ACT and NSW, this Sunday morning, officially at 3:00 am, your clocks go back one hour. Time will be also known as Australian Eastern Standard Time (AEST).

Since we wound our clocks forward for the beginning of daylight saving on 6 October last year, a lot has happened, much of which we won’t want to be reminded of.

Technically, people enjoy an extra hour of sleep when daylight saving comes to end, and perhaps it is a good time to use that extra hour of sleep wisely. The Bureau of Meteorology is forecasting a maximum temperature of just 14 degrees Celsius in Canberra on Sunday, as a cold front sweeps through with strong westerly winds of 25 to 35 km/h.

But for early risers, there will be extra daylight in the morning and we will pull the blinds down an hour earlier.

Fire and rescue agencies in the ACT and NSW are also urging all residents to check their smoke alarms when they turn back their clocks for the end of Daylight Saving this weekend. Supermarkets are reporting they have a steady supply of batteries.

While theories abound of cows not being used to milking routines and hens’ egg-laying being thrown into disarray, the Bureau of Meteorology says the most significant effect is on the observation of climate data.

The BOM says the change in time affects their nominal 9:00 am observation, particularly on elements such as temperature and humidity. Problems occur when trying to evaluate the average monthly statistics in the months of changeover between daylight saving time and standard time.

During this period of the day, the temperature is rising quickly, and there can be a significant difference between the temperature taken at 8:00 am (standard time, by the sun) and that taken an hour later. Because of this, the relative humidity will also be affected.

Lucy Williams of the Sleep Health Foundation says the end of daylight saving isn’t nearly as disruptive to our bodies as putting the clocks forward.

“The body’s circadian rhythm, our built-in time clock, operates on a slightly longer than 24-hour cycle, which means that being able to extend our day, through going to bed a bit later in the evening, is much easier than it is to shorten our day [when clocks go forward].

“While it can take up to a week to feel back to normal after the beginning of daylight saving time in October, in April it usually only takes one night,” she said.

In Australia, daylight saving was first implemented nationally during the First World War and continued in the Second under Commonwealth defence provisions.

In peacetime, Tasmania adopted the practice in 1968, followed in 1971 by NSW, Victoria, Queensland, South Australia and the ACT.

However, Western Australia and the Northern Territory have never adopted daylight saving, and Queensland abandoned it in 1972. Christmas Island and the Cocos Islands also keep standard time, meaning Australia, the sixth-largest nation in the world by landmass, has three different time zones.

Capital Retro - 41 minutes ago
The ACT government and its controlled land and housing policies has alienated the young people who can't afford their first h... View
keek - 2 hours ago
Awesome news. ACT Labor and the greens really looking out for working families with their housing policies, land rates rises... View
John Mungoven - 14 hours ago
Dream of a home (ie with backyard type) is rapidly disappearing in Canberra. Local Govt policy is for 75% of new residences t... View
Community 25

Bernard - 2 hours ago
Problem ACT Government have with promotions and perceptions (possibly the realities) of conflicts of interest are nothing new... View
News 11

Capital Retro - 2 hours ago
Given we were told last year's hot, summer weather was the new norm, does this mean this year's coolest summer in 10 years sh... View
Kay Makin - 3 hours ago
Amanda McLean this looks like one of your beautiful water paintings. View
Motoring 1

keek - 2 hours ago
Yeah, you basically have to ride like everybody else on the road is trying to kill you. People trying to change lanes on top... View
Lifestyle 28

Jackie White - 3 hours ago
There's always one or two hanging around my place each year, but without fail, they wander into the neighbour's yard and her... View
Food & Wine 10

Ashley Wright - 17 hours ago
Jennie Smith vast majority of the tram works were done in the median strip of flemmington road with minimal impact. There was... View
News 5

Robert Hawes - 18 hours ago
Should be done via the nurse walk-in centres. View
News 26

JC - 18 hours ago
Actually think you will find this “outcome” actually backs up my comments. Do you think both parties came to a $400,000 a... View
chewy14 - 19 hours ago
JC, The other week you were claiming the silence was due to pending litigation which now as we see (and I said) was false. Th... View
JC - 20 hours ago
Life doesn’t work like that. It’s quite clear that for the last year they have been in dispute with the builder over this... View
Community 20

Ben Fittler - 20 hours ago
Germaine Muller I know! Devastated he was always so nice View
show more show less
*Results are based on activity within last 7 days

@The_RiotACT @The_RiotACT
The largest number of complaints received by the Integrity Commission relate to promotions in the ACT public service, most of which "did not reach the threshold of corruption" https://t.co/YclDjQUzkZ (48 minutes ago)

@The_RiotACT @The_RiotACT
Zoya Patel says it would be naïve to think sexual assault and harassment allegations are confined to Parliament House - we all have a role to make society and workplaces safer for women https://t.co/ICaSHvQ3C0 (5 hours ago)