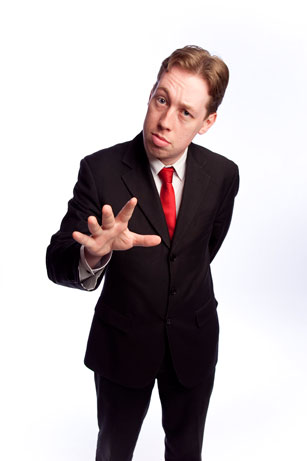 Michael Connell began getting laughs at the age of three in his back yard with the Hills Hoist acting as stage and curtain, and he hasn’t stopped performing since.

Michael has won several comedy competitions such as the TREV Campus Comedy Competition, (an annual event which searches for the funniest university student), and the Melbourne Comedy Festival’s Class Clowns Competition (in which he won second place at the national grand final) and was a Grand Finalist in Green Faces.

A veteran of 6 Melbourne Comedy Festival shows, Michael is bringing his Comedy to the Uni Pub October 2nd.

PLEASE NOTE: Online sales close at 7pm on the day of the show.

Get your tickets here

Sally Ann Fridemanis - 44 seconds ago
Walking my children to school and a roughly 10 year old on his own electric scooter ringing a bell.... flying down the middle... View
Cary Elliot Johnson - 1 minute ago
Graeme Jeffries not in ACT View
Adrian King - 9 minutes ago
Graeme Jeffries just like roads are for cars, right? But yet here we are....🤦🏻‍♂️🚲 View
Lifestyle 27

Geoff N Narelle - 23 minutes ago
I think that the author of the article has romanticised the story somewhat. It was probably a 20 minute bike ride each way on... View
Food & Wine 3

Ivana Ryan - 59 minutes ago
Toasted sandwich and a coffee 😋 Bojana Simic View
Christopher Rompotis - 2 hours ago
Hannah next brunch catch up? 🤔 View
Nicolas Normandeau - 10 hours ago
Matilda Jones I need this in my life. This sounds so good!... View
News 21

@The_RiotACT @The_RiotACT
Opposition Leader Elizabeth Lee will introduce an amendment to the ACT Crimes Act today to make it an offence to 'stealth', the act of removing a condom during sex without consent https://t.co/jFSIrItv88 (28 minutes ago)