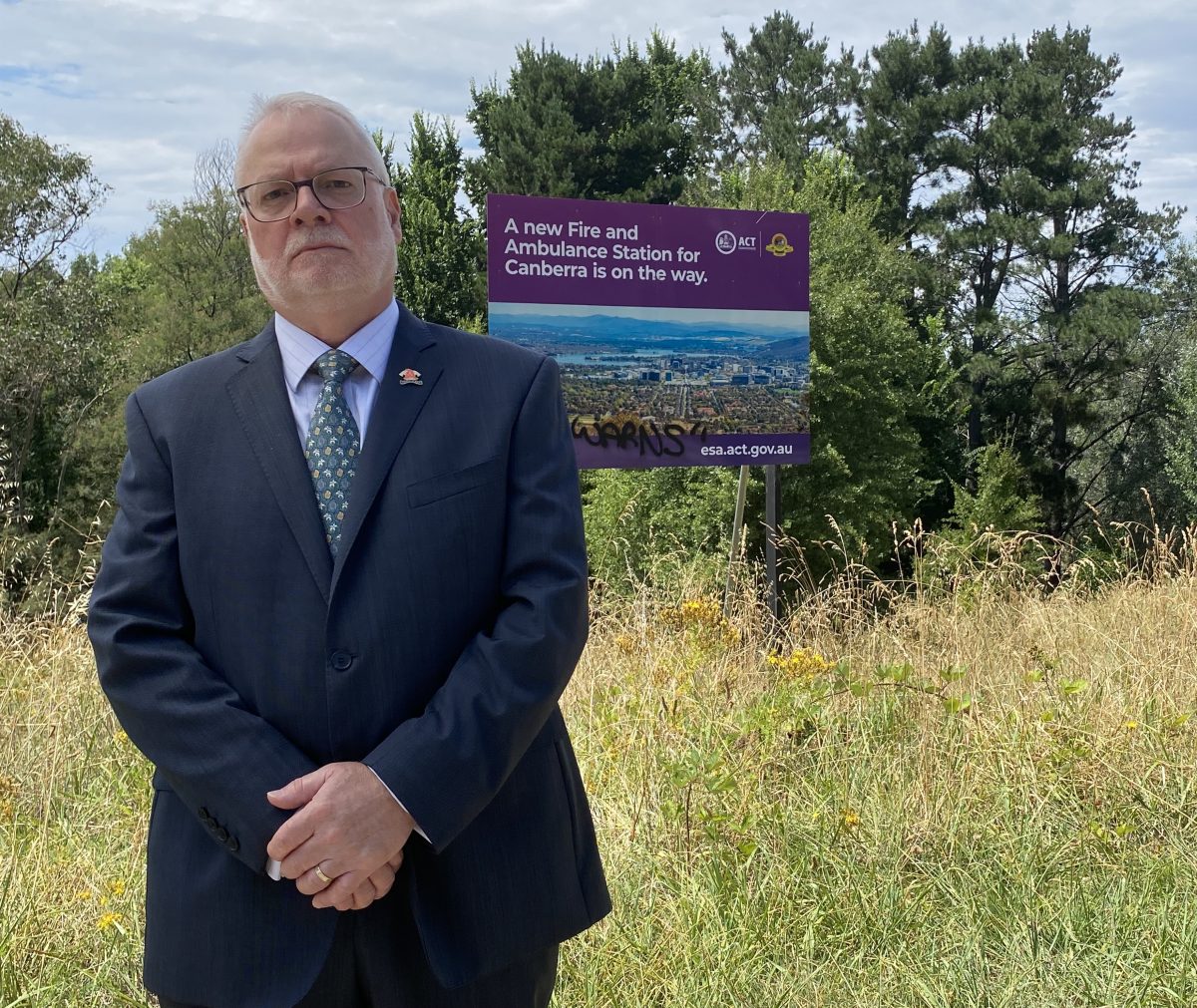 UFUA ACT branch secretary Greg McConville said a promise was made that this site, which is choked with weeds and blackberry bushes, was to become Acton’s new fire station by the end of 2021. Photo: Claire Fenwicke.

As Canberra remembers 20 years since the devastating 2003 fires, the United Firefighters Union of Australia has issued a “status report” saying lessons haven’t been learned from the tragedy and the Territory still doesn’t have the resources it needs.

“We are talking about the veterans of the 2003 fires who, through under-resourcing, have not been able to take leave and now, at the end of their careers, they’re being told that they should accept a payout,” he said.

“That is a most undignified end to illustrious careers.”

“Fire and Rescue now has to retrofit those trucks at taxpayer expense,” he said.

“We agreed on a statement of requirements [for the vehicles] … what was delivered is not what was asked for.”

Mr McConville made these comments at the site earmarked for a new Acton Fire Station, which still stands empty.

“We signed a legally binding agreement with the ACT Government which specified that a fire station would be completed on this site by the 31st of December, 2021,” Mr McConville said.

“As you can see, not a sod has been turned.”

He also expressed “grave concerns” about the delivery of the Molonglo Fire Station, which he said was meant to be ready by the end of the year.

“That site bore the brunt of the fury of the 2003 fires, and it has since had a massive urban expansion,” Mr McConville said.

“Those people living in that area do not have the fire protection that they deserve and that they pay for with their fire and emergency services levy.”

Mr McConville said the amalgamation of emergency services into a single body since the 2003 fires had led to “systemic failures” which would leave Canberra vulnerable should another fire threaten our urban areas.

“The very same organisational settings that failed us in 2003 are in place today,” he said.

The union has called for an Auditor-General’s inquiry into how $45 million, which was allocated to ACTFR to expand the service under the 2020 enterprise agreement, has actually been spent.

It also wants the ACT Integrity Commission to investigate the ACTESA’s procurement processes, and for the outfit to return to its original vision of an administrative and coordination body rather than an operations service.

Mr McConville said ACTFR should then be restructured as a statutory authority rather than a “bureaucratic structure”.

“The accountability regime, and the culture of lack of transparency, remains the same as it was in 2003, if not worse,” he said. 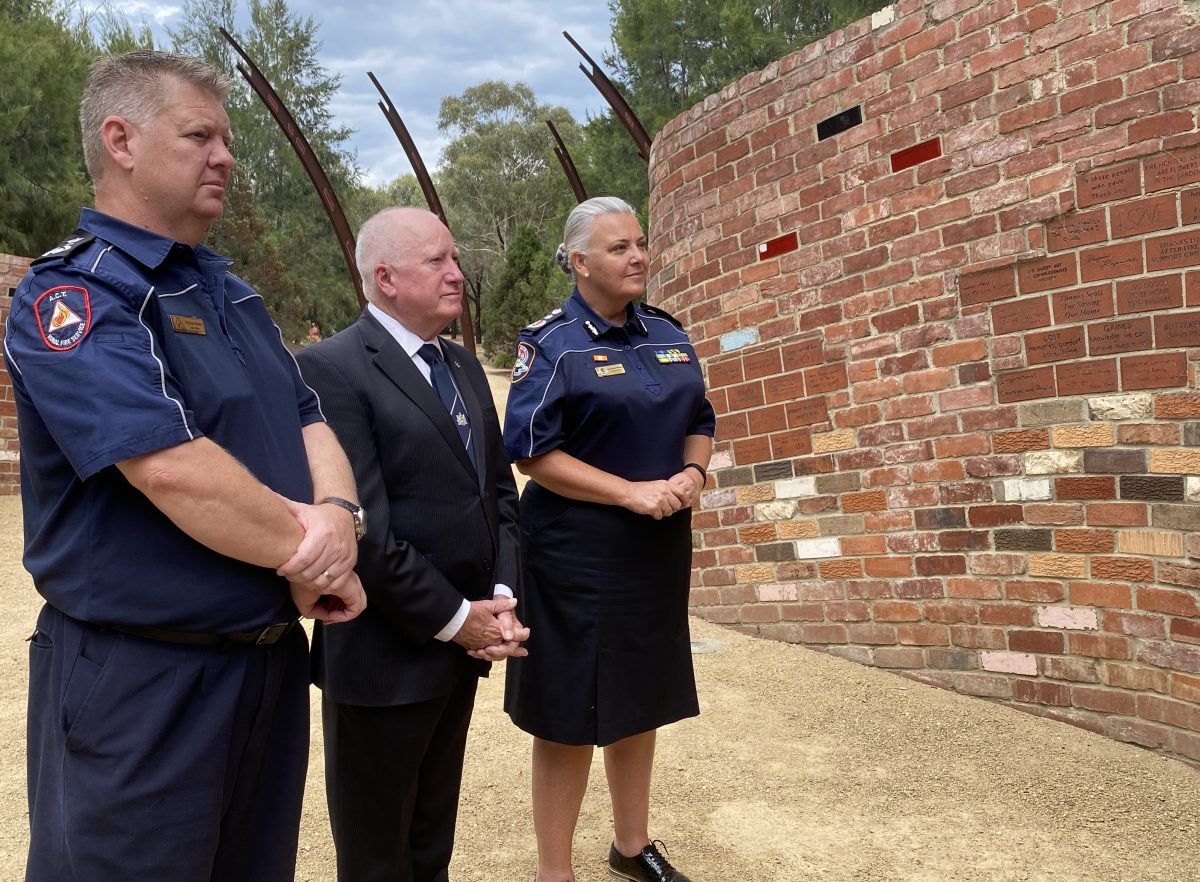 ACTESA Commissioner Whelan said the bushfires were both tragic and a “catalyst for change” for emergency services, pointing out improvements in fire detection and aviation assets, updated vehicle resources and the creation of warning systems for the community.

“What was born from that experience was the basic DNA for an emergency services capability that has continued to grow and evolve based on the learnings of 2003,” she said.

When questioned about the union’s criticisms, Commissioner Whelan said there was “full transparency” into the agency’s procurement processes and was “confident” an Auditor-General probe would find no issues.

“In fact, a recent Auditor-General report highlighted significant improvements over the last five to seven years in the way we procure and acquire equipment, and how we manage our funding,” she said.

Commissioner Whelan also rejected the suggestion recommendations from the inquiry into the 2003 fires still hadn’t been fully actioned.

“As demonstrated numerous times throughout the Territory, we have in fact been able to demonstrate our learnings, our growth, our adaptation to that,” she said.

“Year on year we will strive to continue to improve and adapt to the change in our environment and the challenges that we face … there are always going to be more lessons to be learned and to be applied.”

“We’ll ensure that gets delivered in an appropriate time,” he said.

An official commemorative event of the 2003 bushfires is being held from 6:30 pm today, 18 January, which can also be viewed via live stream.

Nice photo opportunity for politicians and their off-siders. No sign of any of the 500 families who lost their homes in the fire. Somehow, I am not feeling the warm fuzzies.

A fire station opposite the Botanical Garden?, an other well thought out idea by the local morons.
The Gardens are a place to relax and get away from the noise ,but no the narrow minded fools think there all over it.
Be interesting who wins the building contract and the environmental impact statements…shameful