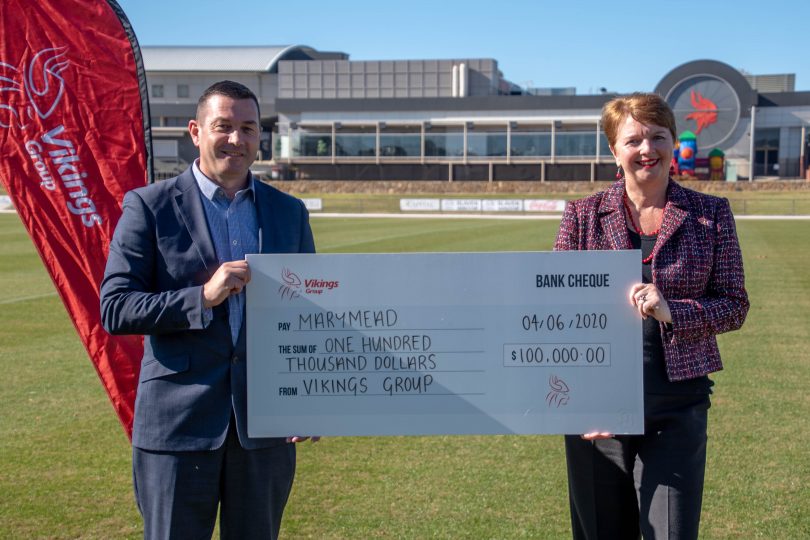 Back in August 2018, Vikings Group embarked on its most ambitious fundraising target for a single charity to date – to raise $100,000 for the construction of the second of the three proposed Marymead Care Cottages at its redeveloped Narrabundah site.

Yesterday (4 June), Vikings Group proudly handed over $100,000 to Marymead to mark the end of an enormous effort by the entire Vikings Group club community.

The ambitious target brought out the giving spirit of the Vikings community with staff, affiliate clubs, members and suppliers getting behind the cause.

Vikings Group CEO Anthony Hill said he was humbled to see the groups within the Vikings community coming together to ensure the goal was reached for Marymead.

“The journey to the $100,000 goal has been extraordinary and heartwarming. We could not have imagined the support and incentives our staff, members, affiliate clubs and suppliers would come up with in support for Marymead,” Mr Hill said.

Marymead is a community based not-for-profit organisation that provides a range of high quality, innovative support services to children, young people and families, and is Canberra’s main provider of emergency and short-term accommodation.

Marymead CEO Camilla Rowland said the partnership between Vikings Group and Marymead has allowed the charity to further engage with the community and continue their mission to provide hope and change for children, young people and families in times of crisis.

The Marymead Care Cottages are a multi-purpose built facility for children, young people and their families which provides emergency and respite care. They include emergency and crisis accommodation for vulnerable children and families, respite accommodation for young people with disabilities and a place to call home, even for a short period, for those children with nowhere else to go.

The cottage can provide accommodation for multiple children and families at one time as they can be sub-divided to provide contained accommodation depending on the specific needs of the residents requiring support. The care cottage also provides support/respite for families via day programs such as ‘Amaze’ for young men and women post-school to 25 years old with moderate to severe physical and or intellectual disability.

Vikings Group Board Vice President Marty O’Brien said: “Vikings Group has always operated from the ethos that we support the community that supports us. Marymead provides a vital service to the Canberra community and I am proud of the Vikings Community coming together to raise these funds that will assist Marymead provide emergency and respite care.”

Anthony Hill said raising the funds was a whole-of-group task.

“Vikings Affiliate Clubs held their own fundraising days, our staff donated money from their weekly pay and our members kindly donated in-venue time and time again. I think this demonstrates that community clubs can create a shared sense of belonging that inspires generosity and true community spirit.”

Vikings Group staff were supporters of the fundraising effort. Staff like Mick Peel, who has been working Erindale Vikings for five years.

“Working with the community is at the core of what we do here at Vikings, I am so proud to work for a business that allows me to get involved at various levels of the community and help make an impact. Donating from my pay is just one of the ways we do this,” Peel said.

“We want to get involved and contribute to the development of our great community. When we see those values embodied by our members, staff, athletes and even suppliers, so that we can help other groups, it makes us all proud to be part of a community like we have here at Vikings,” Hill said.

“I want to thank everyone who helped us reach our target. Your kindness will see the second Marymead Care Cottage built at their Narrabundah site.” 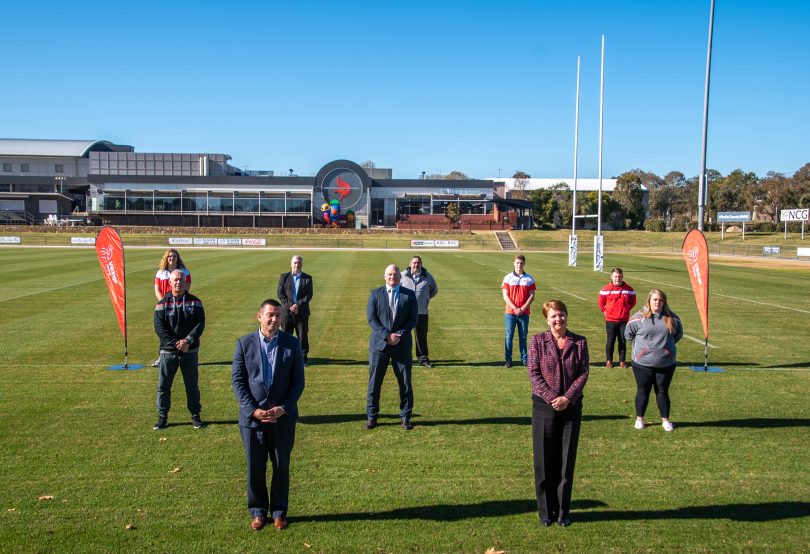 The ambitious target brought out the giving spirit of the Vikings community with staff, affiliate clubs, members and suppliers getting behind the cause.

dulynoted - 4 hours ago
the electricity market in australia seems rigged, we pay way more for electricity than other countries with similar generatio... View
Capital Retro - 4 hours ago
Then there is the "thermal runaway" risk if these things catch fire: https://stopthesethings.com/2020/03/01/giant-batteries-b... View
Ol L - 5 hours ago
This would be great however I foresee yet another hike in electricity prices if it goes ahead View
Food & Wine 50

@The_RiotACT @The_RiotACT
Can you have a rewarding career and live regionally? @allinsure’s newest senior account executive Sarah Townsend says yes, you can https://t.co/6wZv0NBaEG (36 minutes ago)