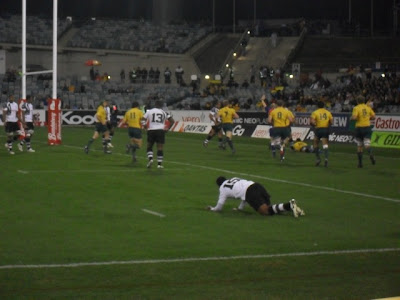 Over 15,000 Canberrans froze their butts off to watch the Wallabies defeat Fiji (49-3) at Canberra Stadium on Satuday night. And it was so worth the frostbite!

The Fijian game plan appeared to be lots of kicking behind the line, which seemed to work OK for them.

Unfortunately, there were also a lot of high tackles – hard to watch knowing we need our best players injury-free for Tri Nations next month. ABC News tells me today that Taniela Rawaqa and Saula Radidi are both facing dangerous tackle charges, so the fans weren’t the only ones to notice.

Giteau was telling us on Thursday that they were expecting Fiji to throw the ball around a lot, and that it would be unpredictable play. So their plan was to do their best with their more structured rugby. And from the final score, it certainly looked like this worked. 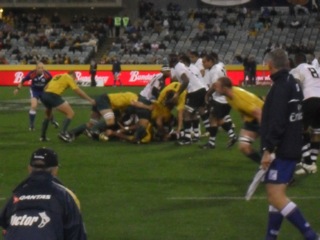 It was a bummer to see Ben Alexander injure his knee in the second half. You can hear him on ABC Radio here saying that he thinks he’ll be out for six weeks, but still hopes to be back for Tri Nations. He told us on Thursday that he’s really looking forward to beating England and New Zealand, and I’m hoping he gets back to full strength by July. I thought perhaps the choice of music as he left the field was not the most uplifting for him (Eskimo Joe’s Foreign Land with the line I smell the blood of an Australian).

There were plenty of Fijian fans at the game, singing and waving flags and generally having a good time.

My other half recommends fried chicken and a thermos of hot chocolate to keep warm for things like this, while my friends on the other side recommend strapping a rugged-up baby to your front as your own personal heating unit.

Hopefully the crowd last night means we might get more Wallabies games in future. Canberra stadium is a great venue for it, pretty much any seat had a good view and plenty were close enough to almost feel part of the action.

11 Responses to Wallabies vs Fiji:
Filter
Showing only Website comments

The former. They are definitely more sedate than NRL or AFL fans.

That said, I think that many ppl go to the Rugby for a night out rather than to watch football.

I go to the rugby to watch a game of football without being bothered by drunk ferals.

The former. They are definitely more sedate than NRL or AFL fans.

That said, I think that many ppl go to the Rugby for a night out rather than to watch football.

Arguably the Fijians are a better attraction than Italy, in terms of attacking flair in any case. As noted, I reckon it was colder at last year’s test when a further 7000 turned up (for a total of 22,468).

Lets face it, a game against Fiji or Italy will never draw the same crowd as one against the All Blacks, the Boks or the Poms. People want to see a game, not a trouncing. Cold or not, you don’t get a first rate crowd at a second rate show.

Yeah, fair call, there was def no crowd argy bargy where I was sitting. However, there were quite a few occasions when the crowd was pretty quiet and it was then things seemed a bit flat and lifeless.

Never mind, looks like it might be the last we see of the Wallabies for a while anyway.

In regards to having the game during the day, that wouldn’t suit Foxtel’s coffers, so not really much chance of that happening, either.

I was actually pleasantly suprised by the numbers – being a night game in cold weather, I expected only half as many to turn out. And I really did think there was good atmosphere, my criteria for “good” meaning everyone seeming to have a good time and vocally supporting their team, and nothing happening that would interfere with others enjoyment of the game (like being abusive to other spectators or the players).

Tim Gavel got on the ABC agrees re night games and has given the subject a fair hammering. We know it’s cold at night in Canberra – for some of us that’s why we like it! But going to an arvo game such as the Raiders is always going to be more enjoyable than a night game for most people.
Doesn’t matter much…the IRB takes over test scheduling next year and the holy dollar will become even more important. We won’t even get the 2nd tier tests we get now.

Oh, in regards to the crowd. They should sell the seating on the Gregan-Larkham Stand side of the ground first so that when there are almost 10,000 empty seats it isn’t quite as obvious to those watching from home.

To be honest, I thought the crowd of 15K+ was a bit disappointing. That’s not out of the question for a regular Brumbies match and yet this was an International match, supposedly featuring the best players Australian rugby can offer.

It was quite a bit colder at last year’s Italy test.

Looks like you were sitting at the wrong end EMD, especially for the second half.

I’m happy to go along and support the international matches so that we may continue to see the Wallabies in town. However, not really being a Rugby person I find the game difficult to follow and perhaps that contributes to my conclusion that there’s no atmosphere? Although, the Fijian fans near where I was sitting were good value.

Anyway, there were some nice tries scored in the second half with some quite nice ball movement, so I still got my money’s worth.

and the SMH has the article below saying the crowd numbers mean we won’t see another test – has anyone told the gurus at the ARU that Canberra, at night, in June is freezing? Thank god there was no rain and wind. What’s wrong with daylight when there’s a modicum of warmth to be eked from a June afternoon sun….

The missus and myself went – its was mostly a farce, I susported Fiji over Australia just because I like the underdog.

Being a bit of a big girls’ blouse, I think I prefer watching games in the warmth of the RUC rather than Bruce stadium. Ticket prices were a bit high and the cost of food and booze for the quality was poor (particularly the food, I know not to expect too much for show food but it was pretty poor).

Sair Rah - 9 minutes ago
Nathan Lofthouse Totally... and the tent was in the Clearance bin due to half the pegs missing.... View
Nathan Lofthouse - 11 minutes ago
On afterpay. View
Anne O'Hara - 4 hours ago
Corey Karl and lower their expectations of what they can have. View
Property 51

It may be well into next week before the ACT and the surrounding region sees more than one day of...
*Results are based on activity within last 7 days

ACT Policing has a blunt warning for e-scooter users: be an idiot and you will face the consequences. With e-scooters...
Opinion 35

@The_RiotACT @The_RiotACT
The Bushfire Royal Commission has identified climate change as an increasing risk but has avoided recommendations to reduce emissions https://t.co/uN8VAkAIOK (42 minutes ago)