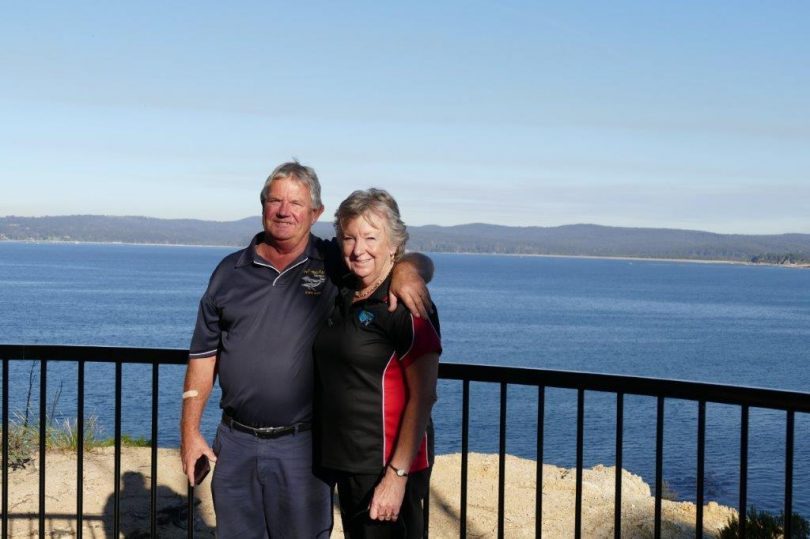 Ros and Gordon Butt are about to enjoy their first Eden Whale Festival as spectators rather than as busy tour operators aboard Cat Balou.

The new owners of this famous Eden vessel will be taking her out on the water this year instead, hoping to thrill visitors. For the first time, Ros and Gordon, who are pioneers of whale watching in New South Wales will be able to relax and enjoy time with their community.

Cat Balou had been running as a Twofold Bay sightseeing business for three years before Ros and Gordon took over in 1987.

“We were just doing bay cruises at that stage and noticed that there were more whales being seen and wondered if there might be a market for whale watching,” Ros remembers.

“The original Cat Balou was pretty small and slow, but Gary Becus the original owner had access to a larger boat, so we got together and we did three whale watching trips out to sea in the November of 1990.

“We couldn’t find any on the first trip, but we were able to find whales on the next two Saturdays.

“We had about 20 people that year, we put a sign up at the wharf and that’s all we got.”

Ros says they were the only ones looking for whales in those days.

“The next year we did the eight Saturdays in October and November, people then didn’t really have high expectations about the whales, it was a mystery to them.

“If they saw one in the distance or they saw a blow they were quite satisfied, whereas now you have to have them breaching and right beside the boat,” Ros laughs.

“We were the first, the original whale watchers in New South Wales, and we grew to doing it seven days a week.”

Ros has lived in Eden since she was four years old and came to the role of whale watcher with no knowledge or experience.

“Nobody was too interested in whales, well before we had the boat I remember hearing on the radio that there were whales off the lookout,” she says.

“I remember picking up the binoculars and seeing these two puffs of smoke and thinking – well that’s not very exciting.

“That was my very first recollection of seeing them here.” 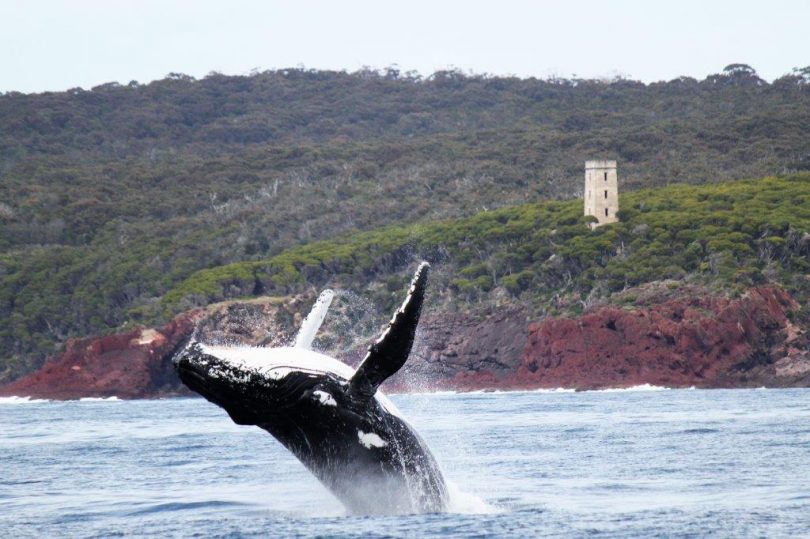 Photographing Eden’s whales has become a habit for Ros Butt.

Thirty years ago, the first year they went out, Ros says they would have been lucky to see 10 whales.

“We’re told that when whaling stopped in Australian waters in the 1970’s the population of Humpbacks was less than 500,” Ros says.

“Now they are saying the population is around 20,000 along the Australian East Coast and increasing by 10 per cent annually.

“And in the last few years, the numbers of mothers and calfs coming through has been phenomenal.”

Despite being underwhelmed by early experiences, the rush of seeing whales at close range and experiencing the size and presence of these marine mammals urged Ros and Gordon on.

“We didn’t really realise it at the time, but what we were seeing was really quite unique in that whales were stopping to feed here,” Ros says.

“They were lunging through the water with there mouths wide open.

“So I rang this Dr Bill Dawbin who had been studying whales since the 1950’s and I said – I think these whales are feeding off the coast here, and he said – Oh no, no, no. He laughed it off.”

But with a bit more information, including a water sample sent through the post, and having seen Ros’ photos, Dr Dawbin changed his view.

Until then it was thought whales didn’t feed on their annual migration up and down the East Coast between Antartica and Queensland.

Ros’ collection of photos over her three decades has also helped researchers identify and track individual whales through the unique markings on their fluke.

“Taking photos of whales has become a bit of a habit,” she says.

“One of the mothers we saw here a number of years ago, the Pacific Whale Foundation identified her as the oldest producing whale on record, and that was 24 years after she had first been sighted with a calf.” 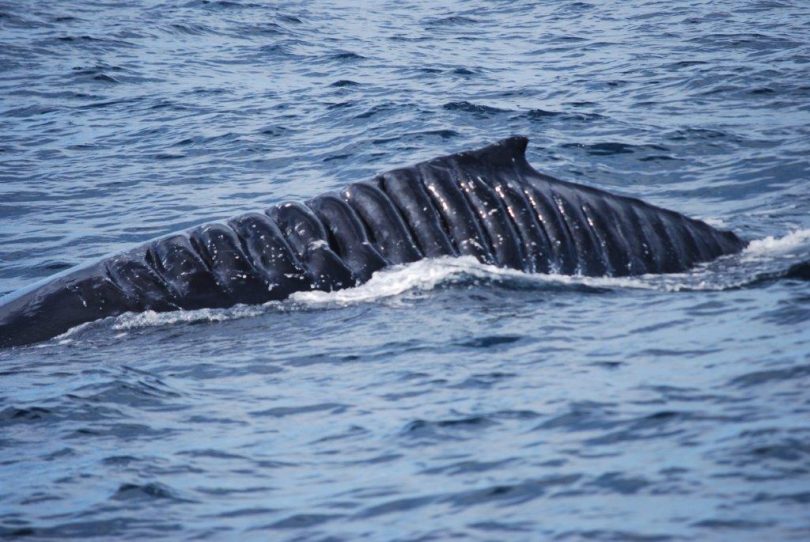 Bladerunner wearing the scars of a run in with a big ship.

Despite her track record, Ros says it’s too hard for her to ID individual whales, unless of course its ‘Bladerunner’.

“We’ve seen Bladerunner a couple of times over the years, it’s been hit by a ship’s propeller, and has a massive prop mark all down its left-hand side.”

“And some of them have really bad breath you don’t want to know those whales.

“And it’s always fun being mugged by a whale, when they come right up beside the boat and stick their head out of the water and look at you.

“And then there’s the signing they do, it can be very emotional for a lot of people,” Ros says.

The new owners of the Cat Balou took over earlier this year. Unfortunately, Gordon broke his leg on the second last day on board and spent weeks out of action, but part of the sale was that Ros and Gordon could come whale watching whenever they like.

“We have met so many people over the years that just keep coming back, you make friends with a lot of the passengers. We have a bit of a whale family, people who have become more than passengers.”

Brad and Larna Wills are at the helm of Cat Balou for Eden’s Whale Festival this weekend.

“Being passionate about what you do and looking after your passengers so you get them back is my best advice,” Ros says.

When it comes to enjoying the Whale Festival herself, Ros is hoping to be awake for the fireworks at 9 pm on Saturday night (3 November).

“We’ve always been too pooped after being on the water all day,” Ros laughs.

These whale watching pioneers have no grand plans for their retirement other than being tourists themselves and exploring the local environment and contributing to the Eden community through the cruise ship program and visitors centre.

Apart from the whales this weekend, keep an eye out for Ros and Gordon Butt, who have helped Eden rediscover the natural wonder we stop to celebrate.

With the wharf extensions in full swing at Snug Cove, this year’s Whale Festival will be focused around the sporting fields behind Aslings Beach on Barclay Street, with Saturday’s street parade leaving Eden Fishermans Club at 10 am.

Check the Eden Whale Festival website for the full program which starts on this afternoon.

Shane McMinn - 9 minutes ago
Quangers, or the Socialist Republic Of Queanbo.. View
MERC600 - 2 hours ago
Quangers has it all over Canberra these days. No graffiti , grass mowed and no rubbish floating about. The other article on t... View
Sarah Winders - 3 hours ago
Lorraine Neville what do you all call it? View
Sport 18

@The_RiotACT @The_RiotACT
Critics say a 10-year funding crisis is coming to a head at the National Archives. An open letter to the Prime Minister pleads for help to save irreplaceable national assets https://t.co/IOZh6De8k4 (55 minutes ago)