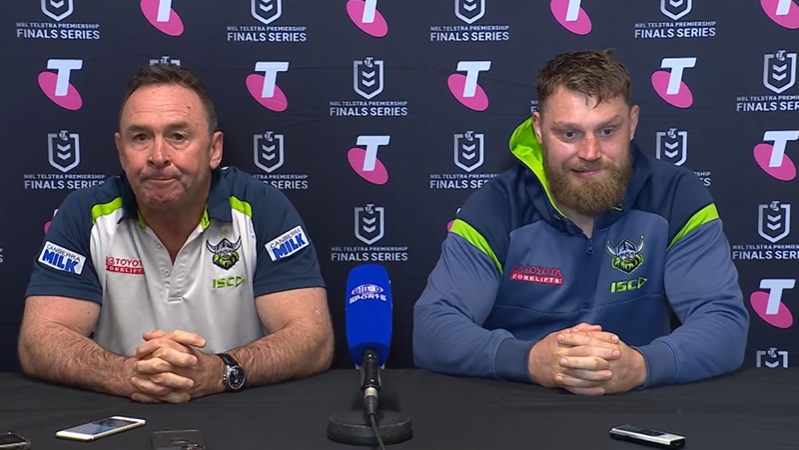 Ricky Stuart and Elliott Whitehead chat to the media after the Finals Week 2 clash against the Eels. Photo: Screenshot.

The Raiders’ season should not be defined by the 40-4 loss to Parramatta in the NRL semi-finals. Instead, it should be used as a launching pad for 2023.

But to take advantage of the club’s incredible finish to the season, there are several issues to resolve, including the future of Meninga Medalist Joe Tapine.

Tapine, who ran for 203 metres in the win over the Storm in week one of the finals series, is contracted until the end of 2023.

But under NRL rules, he can start negotiating with rival clubs from 1 November this year if he is not re-signed beyond 2023 before that date.

His management would be tempted to go to the open market to test his value given his current status as one of the top forwards in the game.

The Raiders can’t afford to have the negotiations drag into next season. Previous experience has shown how it can become a distraction for both the player and the club.

Locking Tapine in it is by no means the only issue the Raiders must deal with.

Adam Elliott developed into a key player at lock for the Raiders with the ability to play several roles, including a ball-playing number 13 to a hard running forward, to a backup hooker.

Elliott’s absence in the semi-final loss to the Eels was telling as the Raiders struggled without his creativity.

Elliott is heading to Newcastle and a ‘like for like’ replacement won’t be easy to recruit. However, the Raiders might have a ready-made replacement in Corey Harawira-Naera.

And let’s not forget that Ryan Sutton’s departure to the Bulldogs means the club will be on the lookout for a tough middle forward.

With such a young team this year there are several obvious areas for improvement.

READ ALSO Margot will bring wine, cheese and a touch of Paris to the lake this summer

Xavier Savage can be an X-factor player but is still learning the basics of being a fullback, including positional play. A couple of extra kilos in the off-season might also be beneficial. He has enormous potential, but there is still plenty of room for improvement.

Jamal Fogarty had a disrupted start to the season because of injury. The Raiders were a better side when he found his groove and no doubt there will be further work with Jack Wighton in the off-season.

Ricky Stuart will be busy with several key departures in his assistant coaching staff, with Brett White and Andrew McFadden leaving.

There are other roles in support staff, such as recruitment, that also need to be filled.

There will be little off-season for the Raiders management as they work to establish their team in the NRLW next season.

As was the case this season, injuries can derail a campaign, which is why so much effort must be put into the club’s depth.

Where to now for the Raiders? Get a new board with some cojones! Need new blood in the coaching team…especially the fitness side of things.

Get Timoko and Savage to swap positions.

I agree re Savage. He could do worse than study in detail a reel of how Gutherson played on the weekend.