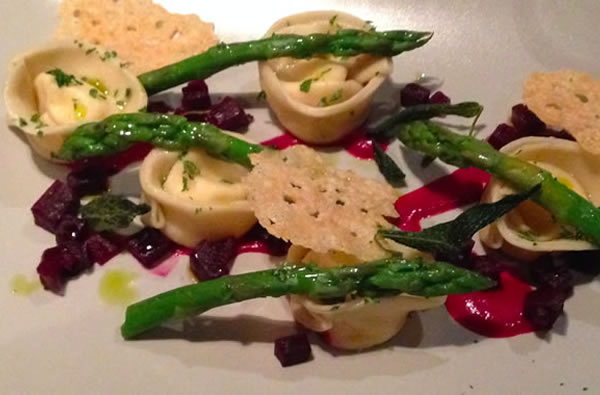 If we weren’t having such a good time, it would have been awful.

We are four Canberra girls who enjoy good food and company (and a good bottle of wine doesn’t go astray, although at times a bad bottle can be alright too). We are by no means food experts – or snobs – but after 20 years dining together at many different restaurants we know what we like.

We weren’t that taken with Pistachio.

Pistachio was recommended to us so perhaps we had unfairly high expectations. First impressions were good – warm with rich earthy colouring, candles on tables, carpeted (which is always a bonus for noise) and generally fairly ambient. It was pretty busy when we arrived for our 7.30pm booking and people seemed happy with their experience, aside from a couple near us who looked like they were on date night hell with no script to help out.

The menus appeared in front of us with a limited selection of entrées and mains (6 of each), but this made our choice easy and there was something there for each of us. The menus themselves were simple printed paper with bonus wine blots and grease stains.

The table setting included little bowls of pistachios, which was handy given the 30 minute wait before being served bread (a lovely sourdough – with a real, salty quenelle of butter). We then waited a further 20 minutes for our entrées, which didn’t seem an issue at the time as we were deep in conversation, although our tummies were rumbling.

By that stage (around 8.30pm) the clientele had thinned to around 4 tables (clearly early dining must be the thing to do around these parts).

When mains finally arrived well after 9pm (prompted by some fairly loaded looks at the staff), three out of four looked lovely. The wagyu beef turned out to be corned, which although mentioned on the menu was easy to miss and seemed a surprising choice for such a nice cut of meat. Although raved about by the waitress as ‘delicious and melt in the mouth’, it was neither and a steak knife would have been handy. 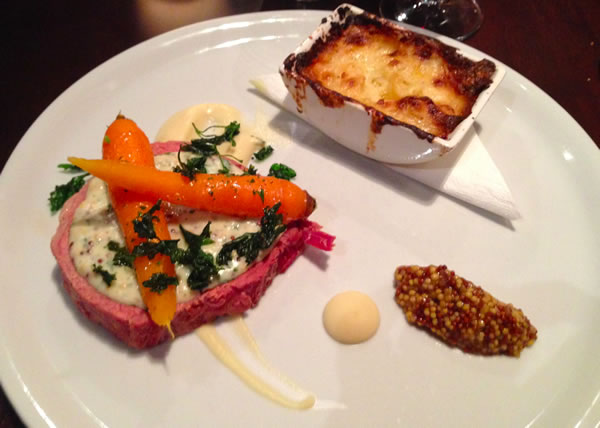 All four meals were limp and warmed as if left under a heat lamp for longer than expected. The side of beans were excellent, but the potatoes were heated to a temperature that could only be achieved through a microwave.

The lamb was tender and the duck-breast well received but the tortellini (all five of them) were cool, leathery and disappointing – although artfully arranged. As for beetroot cooked two ways, the mystery was solved and a sleepless night averted when the two ways were revealed as chopped and pureed.

Dessert was turned around pretty quickly by comparison although only really ordered in the interest of review (as it was nearing 10pm). All options other than the affogato were heavy in fruit content, much to the dismay of our non-fruit eating diner. The highlight (potentially of the evening) was the passion fruit parfait which wasn’t what we expected but a lovely combination of crunchy and creamy with some fairly heavy hitting vanilla ice cream on top (again in a perfect quenelle). 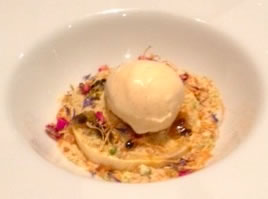 The service throughout the night was eager (aside from the 40 minutes prior to our mains arriving when we couldn’t capture the attention of the staff), although for the most part seemingly inexperienced. Shaky handed wine pouring, for example and for a table of four, they failed to get the placement of meals right at any course. All relatively little things that could have been overlooked, if it weren’t for the slow food service.

Overall we had a great night, but we hadn’t caught up in a while and had brought along a few bottles of wine so the company was in cracking form. If we hadn’t been so comfortable in that company and able to entertain ourselves it would have made for a long and reasonably painful evening.

There were some promising foundations and we all wondered if we had maybe visited on a bad night. Perhaps the staff were new and there was a change in the kitchen for the evening, or it was just one of those nights. Looking at other reviews today, (with the exception of a few poor reviews), based solely on our experience, the reviews given by other diners sound like they were for another restaurant.

We had high hopes and really wanted to like this one more, but at least the ladies’ was clean.

Anna Musgrove - 7 minutes ago
Nicole McGuire look it’s not that great. So far it hasn’t been too yuck in the shower. We use it on tea/coffee but never... View
News 22

Ben Keaney - 34 minutes ago
Also if they are not in the numbers that the anti-brumbies say, what do you think a maximum brumby population should be? Sure... View
Ben Keaney - 40 minutes ago
Di exactly how do brumbies keep the fuel load down? Do they eat fine forest fuels such as sticks and leaves? Or Perhaps its t... View
Di Hunter - 4 hours ago
Jackie Hattingh it’s actually proven that they don’t and it is also proven that they are not in the great a numbers as th... View
Property 18

Beck Bianco - 49 minutes ago
Probably because Canberra is no longer affordable so people move to drivable towns outside of Canberra View
Michelle Preston - 1 hour ago
Property prices in Yass are over priced. View
Elyse Crawford - 2 hours ago
Amanda Adams still the same cycle, those tenants would then be homeless. View
News 7