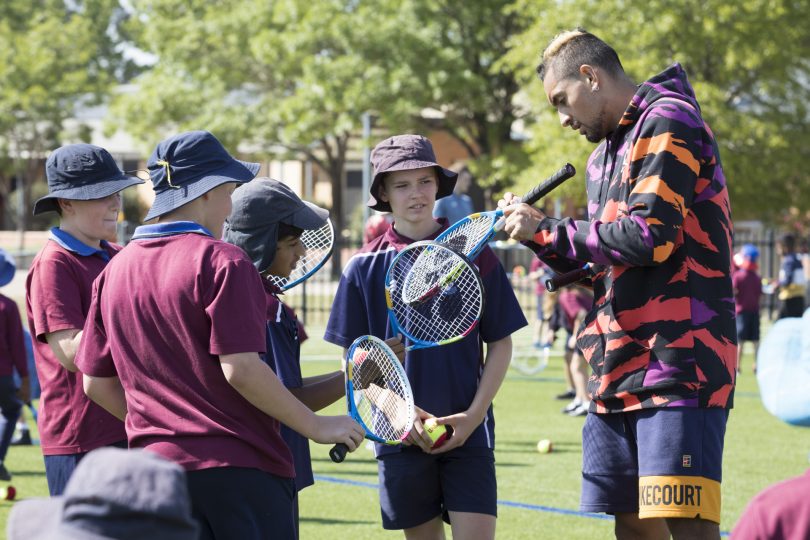 Nick Krygios has led the charge of sportspeople donating funds to support those impacted by the fires. Photo: Michelle Kroll, Region Media.

Prior to the Raiders winning the 1989 Grand Final there had been a perception that Canberra didn’t have a soul. It was seen as a city inhabited by politicians and public servants, devoid of a community spirit.

The sight of people spontaneously filling the streets celebrating the Raiders victory did much to change that perception.

It has to be said that sport has continually provided Canberra with a sense of community from the time the city was established.

So it should come as no surprise that sporting organisations and sportspeople from Canberra have been at the forefront to help those impacted by the bushfires on the South Coast, Southern Inland and through the Monaro region.

Nick Kyrgios emerged as the catalyst for sportspeople to raise funds through their individual sports efforts. And this was followed by sports organisations and teams coming on board with fundraising activities.

Teams such as the Raiders, the Brumbies, the UC Capitals, Canberra Chill, CBR Brave, Canberra Cavalry, GWS and the ACT Meteors indicated early in the piece a desire to raise funds and offer support to those impacted.

The #WeAreOne campaign is the first to unite every major sport in Canberra behind a common cause, with the involvement of the major teams mentioned above coupled with sporting organisations such as Basketball ACT, Tennis ACT and Netball ACT.

Genuine community spirit from sporting stars and organisations has a long history in the ACT.

Just last year we witnessed Raiders forward Sia Soliola receive the Ken Stephen Medal for his inspiring work off the field. Sia works at the Early Morning Centre providing meals for the homeless and disadvantaged. He is also involved with the Vinnies CEO Sleepout, Kulture Break, Menslink, Silence is Deadly, and he’s an ambassador for Angelman Syndrome.

And, of course, there’s Ricky Stuart and the tremendous work that he has led through his Foundation to support people with autism.

Brumbies forward Lachlan McCaffrey won the Rugby Union Players Association’s Community Service Award for his work as co-founder of the Youth in Union charity. It helps disadvantaged boys and girls in Pacific Nations. At one stage he flew to Tonga at his own expense to conduct coaching clinics during a Brumbies bye week. Lachlan also has a role with the Fly Program, which deals with mental health for males through a fly fishing program.

Canberra sportspeople and sporting organisations have been at the forefront of many initiatives when it comes to support, recognition and inclusion. And this is why we should all be proud of the leadership role played by so many within our sporting community.