Why you should stick by the Brumbies 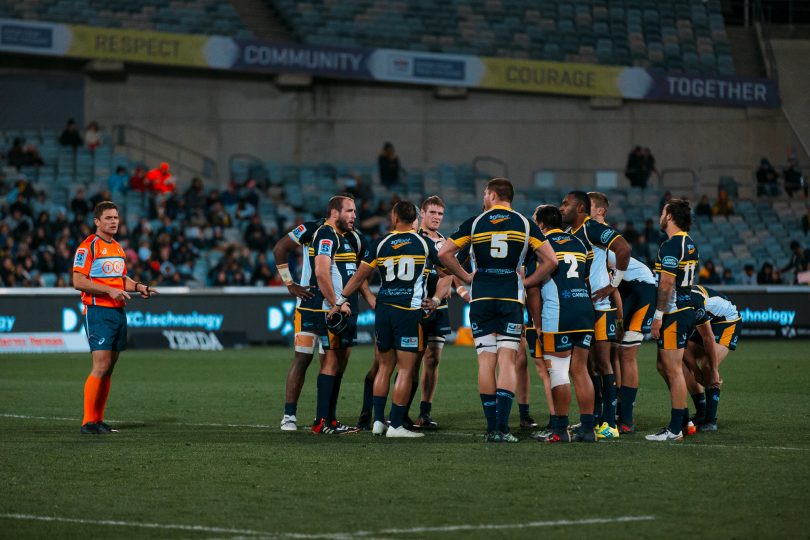 The Brumbies scored a total of 56 tries this season, equalling the most tries in a season by the club over the last 10 years. Photos: Photox.

It’s been two and a half years since then Brumbies’ CEO Michael Jones suggested the club could collapse if he was pushed into war by his foes; these were the people he felt were undermining his position.

There have been times over that period where there was a perception that the forecast by Jones threatened to become close to reality as the ugly saga became bogged down in the courts before ending with a settlement.

Far from collapsing, it would appear the Brumbies have now emerged stronger from the experience.

At first glance, this would appear to be a strange reading on where the Brumbies currently stand in the sporting landscape. They have missed out on the Super Rugby finals for the first time since 2012, the home crowds were very low, averaging 8,391, and they had just three players in the match-day squad of 23 for the final test against Ireland in June.

But enough green shoots though have emerged in the back half of this season to suggest a positive future.

Coach Dan McKellar in his rookie year as a head coach has worked hard to move the players from a conservative to attacking mindset. Such a process doesn’t happen as quickly as most would hope, with players often reverting to a previous pattern when under pressure.

That was the case in the loss to the Crusaders when the Brumbies had a two-player advantage with two Crusaders yellow carded. The Brumbies, with the game in the balance, elected to kick the ball away. This was almost a throwback to the days of Jake White when the side appeared to be at their most conservative. Sure they made the final under White but the pattern of play meant the Brumbies appeared to lack the will to attack from deep inside their own half with the focus on field position. It worked then and so it continued until it became apparent that it was unsustainable for both the players and the fans, who became frustrated by the lack of ball movement. 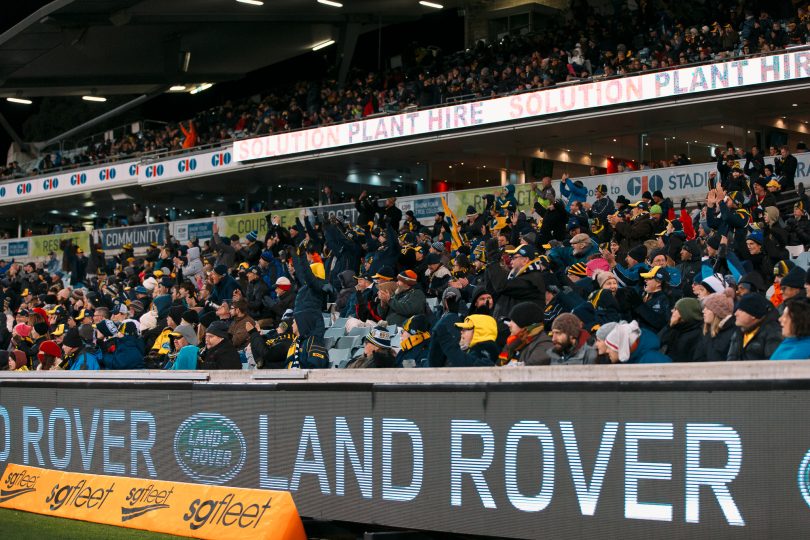 The Brumbies’ recorded their second-worst home crowd in club history in May but crowds have started to grow again.

It took almost half the season to see during a game what McKellar had been trying to implement. The starkest example of this is centre Kyle Godwin, who for much of last season and for the first seven games or so of this season appeared to be locked in a pattern of the past, only to blossom at the back end of the season as a running back. Sadly for the Brumbies, they will receive no benefit from his emergence next season as he is heading overseas.

The thing I like about McKellar is that he stood his ground as the side stumbled to five mid-season losses in a row and struggled for continuity.

He backed himself and his players to turn things around with a game plan that the players were taking time to implement. Finally, it clicked as the side won four of their last five games including victories over the Bulls in Pretoria, the Chiefs in Canberra and the Waratahs in Sydney. The Brumbies defeated three teams in the finals: the Chiefs, the Waratahs and the Sharks.

They left their best performance of the season until the last game, a 40 to 31 victory over the Waratahs, with the Brumbies scoring six tries.

This season, the Brumbies scored a total of 56 tries, equalling the most tries in a season by the club over the last 10 years.

The hope, of course, is that the momentum created at the back end of this year will carry over to next season. There is no reason why it shouldn’t. The bulk of the team is contracted for 2019 with Godwin and Isi Naisarani heading out of Canberra. Pete Samu will join the team from the Crusaders and there are a number of players emerging from the junior ranks with six Brumbies in the Junior Wallabies’ squad. Investment in the academy program is expected to reap dividends in the future.

McKellar’s job has been made easier by the performance of the front office with CEO Michael Thomson and chairman Phil Thomson guiding the club through troubled waters. The Brumbies are expected to make a profit of between 30 to 50 thousand dollars this season, which will be put back into the grassroots, signalling the club’s eagerness to engage with the rugby community. The financial turnaround has been the key with the club returning a profit of close to $15,000 in 2017 for the first time in six years.

Stability is vital to any successful organisation while success on and off the field in sport is crucial. This season the Brumbies have laid the foundation for the future.

Tim Brown a reason to invest the faith? Your jacket will probably fall apart before it pays off though

We need an A League and proper AFL team

If we play like we played last weekend, we'd smash anyone.

June Kirk - 11 minutes ago
Poor Alistair can someone in the Canberra Liberal Team show him how to use Google! It was reported by ABC Canberra this morni... View
Gregg Heldon - 11 minutes ago
Christine Evans I didn't say that. I notice how you didn't answer my question either. But to answer yours, I think that there... View
Mathew Ryan - 12 minutes ago
Phil Ebbott haha. Mal at least made it to a presso. View
News 2

ssek - 52 minutes ago
I really need to move out of this town. It is apparently filled with people who haven't noticed the greens are absolutely use... View
chewy14 - 2 hours ago
Wow, polling commissioned by a left wing think tank finds that the left wing Greens are going to do really well at the next e... View
News 1

Annette Milnes - 1 hour ago
How are you going to park for Floriade or for a picnic etc.? View
News 20

Should the Brumbies rest their players for Cheika’s Wallabies?

@The_RiotACT @The_RiotACT
A new poll from The Australia Institute has found Labor is on track to retain minority government but with a reduced primary vote https://t.co/2ffO5N6a5F (34 minutes ago)