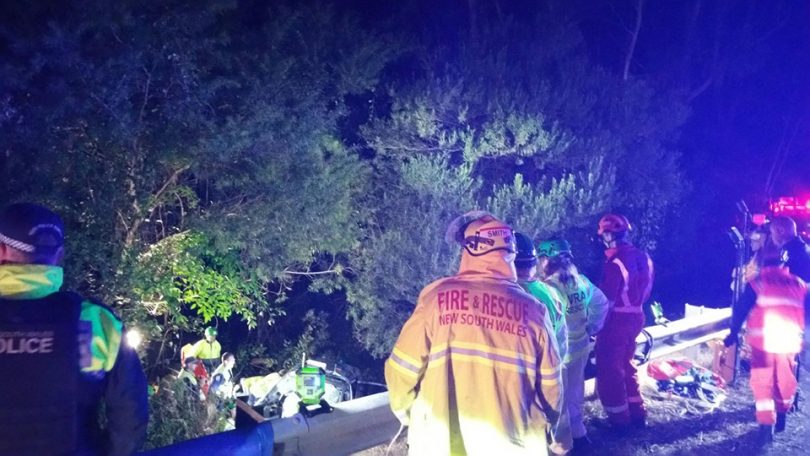 An extraordinary tale of survival with a woman from Benandarah north of Batemans Bay rescued from her car 17 hours after she was involved in a single-vehicle crash near Narooma.

While travelling between Moruya and Wallaga Lake, a Holden Trax SUV left the roadway and crashed into water sometime after 11 pm on Wednesday (June 5), trapping the female driver inside.

“We still haven’t accounted for how that happened but we are still making enquires,” says Chief Inspector Peter Volf, South Coast Police District.

What happens next is the twist in the story. Just before 4.30 pm yesterday (June 6), the trapped woman regained consciousness and was able to phone her daughter in law, however, she was unable to provide her location.

Within 20 minutes of using the mobile phone system, rescuers were able to pinpoint the women’s location – the Princes Highway at Kianga. Marks on the roadside guard rail were the final clue, police locating the Holden down an embankment in Kianga Creek.

Thankfully the car landed on its wheels after possibly overturning, “she is a very, very fortunate lady because she was down the embankment where no one could see her,” Chief Inspector Volf says.

“She was in good spirits, a remarkable effort.”

The woman in her late sixties was rescued from the vehicle and treated for suspected fractures and exposure. She was airlifted to Canberra Hospital in a stable condition.

“It was an amazing effort and well-coordinated, I am always proud of the police and the other emergency services.” 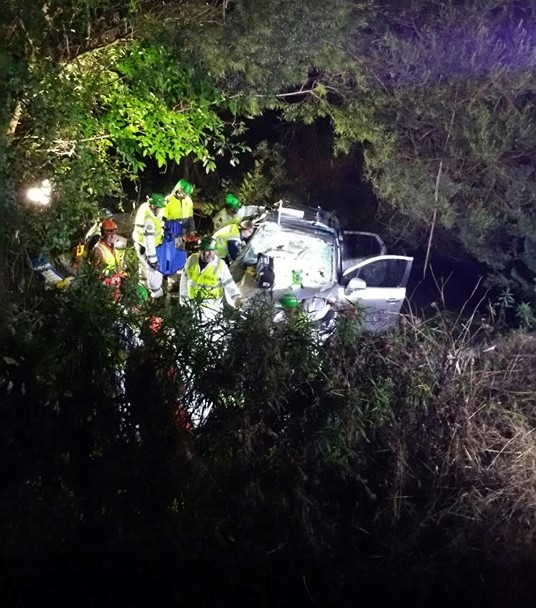 The women in her late sixties was airlifted to Canberra Hospital in a stable condition. Photo: Fire and Rescue NSW Facebook.

Anyone with information about the incident is urged to contact Crime Stoppers: 1800 333 000.

Rhonda Maxwell - 21 minutes ago
Brad is an amazing young fella who is living a full life. His family and friends are s wonderful support as is his footy team... View
Pam Perkins - 57 minutes ago
A very inspiring young man all the best in all your future endeavours and wonderful community support... View
Community 2

Kristine Evans - 9 hours ago
Fabulous idea! Much needed! View
Kristy Hancock - 13 hours ago
If only they did that when my child attended there, he would have made it through, such a great school, I can't speak highly... View
Community 8

aussie2 - 12 hours ago
Firstly I would be challenging directing all southbound traffic to Woden interchange. We are spread out. Surely those outside... View
chewy14 - 14 hours ago
I actually like what they are proposing here and I think integrating the CIT into the new development space is a sensible mov... View
JC - 18 hours ago
So true. It’s far easier to whinge about anything and everything. Though think the core issue is many here just don’t lik... View
News 5

Capital Retro - 17 hours ago
You can't help bad luck OI L. View
Capital Retro - 19 hours ago
Home batteries generally are duds: https://www.solarquotes.com.au/blog/battery-test-centre-reports/?utm_campaign=sq_news_week... View
Ol L - 21 hours ago
Interest free but still a loan. And who would want a second hand EV given their finite batteries? And yes I do own one. View
News 2

franky22 - 18 hours ago
Well I for one will not miss them. I lived in Sprent St & found the peacocks annoying. They are an invasive species just like... View
ChrisinTurner - 19 hours ago
Residential streets should be 40 km/hr or even the European 30 km/hr, now that 40 km/hr is being applied to parts of Northbou... View
show more show less
*Results are based on activity within last 7 days

@The_RiotACT @The_RiotACT
Brad Hayes was paralysed in 2016 after a rugby accident, but he’s gained his independence thanks to his generous community https://t.co/i5hC06BpTw (1 hour ago)

@The_RiotACT @The_RiotACT
@midnightoilband is bringing a clutch of Indigenous stars to Canberra as part of its Makarrata Live tour, including young rapper @TasmanKeith https://t.co/xiLThyLtfS (11 hours ago)

@The_RiotACT @The_RiotACT
Running seven marathons in seven states in seven days will be uncomfortable says Kaiti Penrose who is one of six runners in the region taking on the Bravehearts challenge to end childhood violence https://t.co/Briu2xeOMC (12 hours ago)