Woodchoppers back on the block at this year’s Show 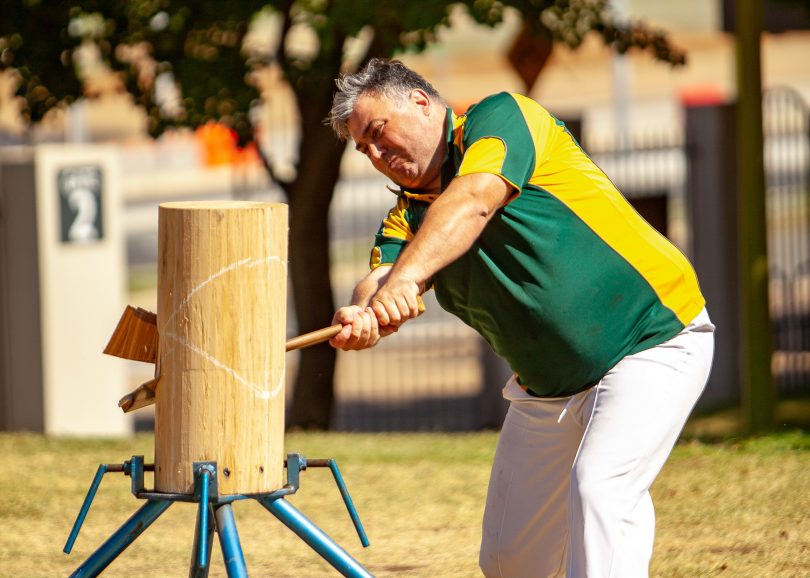 You can expect a full day of this at the Show this year. Photo: George Tsotsos.

The chips are going to fly again at next month’s Royal Canberra Show, with the popular woodchopping event returning after being axed last year due to cost savings.

Organisers say the axemen and women will be back due to overwhelming community feedback that it would not be the Show without the woodchopping.

The event fell to cost-cutting last year and was the hardest decision Royal National Capital Agricultural Society president Michael Kennedy ever had to make.

But Canberra Show CEO, Athol Chalmers said the message from the community was loud and clear. “And we have done it – woodchopping is back,” he said, promising a full day of competition.

Mr Chalmers, and head of woodchopping Andrew Wiseman, made the announcement at an event at EPIC which featured an exhibition woodchopping race.

The race was made up of a junior, a woman and three men, and included two standing blocks and three underhand, demonstrating some of the events to be contested at this year’s Show.

“We are really excited and enthusiastic to have woodchopping back at the Canberra Show and encourage everyone to come along on Saturday 23 February and see the axemen and axewomen in full competition,” Mr Wiseman said.

The Royal Canberra Show has announced that the popular and much-loved woodchopping event, which was axed last year, will return next month due to overwhelming community demand. Canberra Show CEO Athol Chalmers and Andrew Wiseman, head of woodchopping and woodchoppers, made the announcement today.

Events will include junior woodchopping, ladies cross cut sawing and chopping as well as open and championship woodchopping and sawing, and is expected to attract a strong field of competitors from across Australia.

Mr Wiseman said the return of woodchopping to the Canberra Show had been made possible by generous support from several local businesses and individuals as well as ongoing support from long-term sponsors.

This is the fourth major announcement made by the Canberra Show after already announcing parking prices will be halved from $10 to $5 and money raised will go to the local Country Women’s Association, tickets prices will be up to 40 per cent cheaper (online) and a major new community-based initiative, Canberra on Show.

“Bringing back the iconic sport of woodchopping to the Show, fits 100 per cent with community feedback that we need to make the Show more accessible, deliver the traditional Show staples such as woodchopping, rides and showbags, involve the Canberra community, look to the future with innovation and technology and make available a wider range of food and beverage offerings,” Mr Chalmers said.

How much wood would a woodchopper chop?

Yes, that is correct. There will be one full day of woodchopping and sawing on Saturday 23 February. We have worked hard to get woodchopping back. Hopefully we can extend in 2020. Hope to see you at the show!!!

But they’re only having it for one day – the Saturday. Not the whole 3 days like they used to.

Monica Tiffen - 47 minutes ago
They are so lovely, Butsome really worry me Swaying in the wind over Homes! View
Rowena May - 52 minutes ago
and when people express their concerns the govt says no you can’t cut them down….. but hmmm the Northbourne Ave ones were... View
Greg Myat - 1 hour ago
Still it would be a shame to cut everything down due to a once in how many years event. View
Community 47

Peter Miller - 60 minutes ago
Peter Rudd agree agree agree. The govt needs to review street tree policy urgently.... gums are not a good choice. View
Zoe Lewer - 11 hours ago
Bob Foster yep. Us humans sure have made an impact. We are the problem. You are right. The day the people who were invaded ch... View
Joy Gosden - 11 hours ago
Yes. What were they thinking planting them in our suburbs. They drop limbs attract pests and stop grass growing around them.... View
News 319