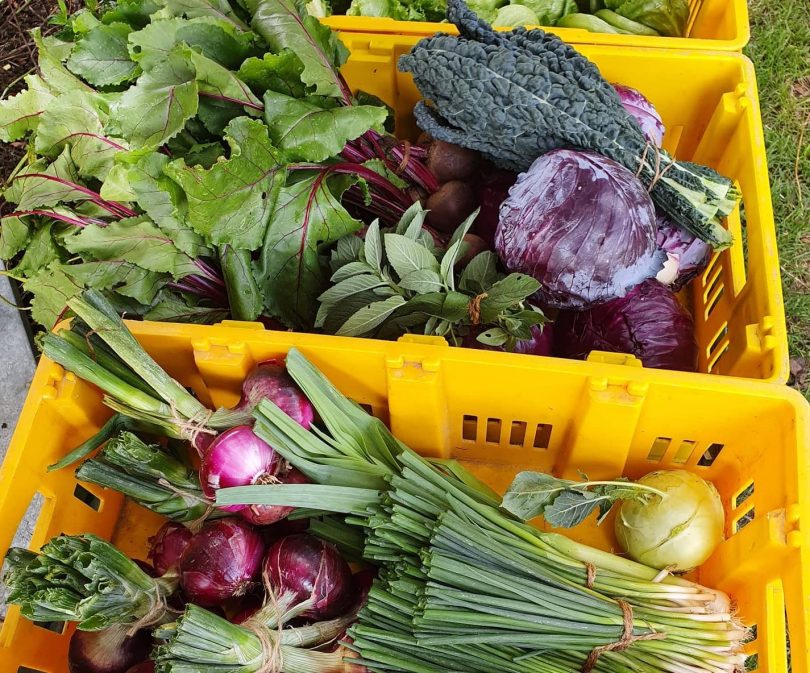 Helen Lynch from Wynlen House at Braidwood reckons there would hardly be a soul in town who hasn’t eaten one of their Brussels sprouts.

Together with her partner Bronwyn Richards, the pair produce an astonishing four tonnes of food each year from their 1000sqm block in the middle of town, a true urban farm and a buzzing hive of productivity.

READ ALSO: Notes from the Kitchen Garden: silverbeet, spinach and what to do with your green tomatoes

Bronwyn began the adventure almost 20 years ago when she bought a large block with the intention of growing food on a substantial scale. There was local scepticism about the plan and a widespread belief that Braidwood was too cold to be particularly productive. 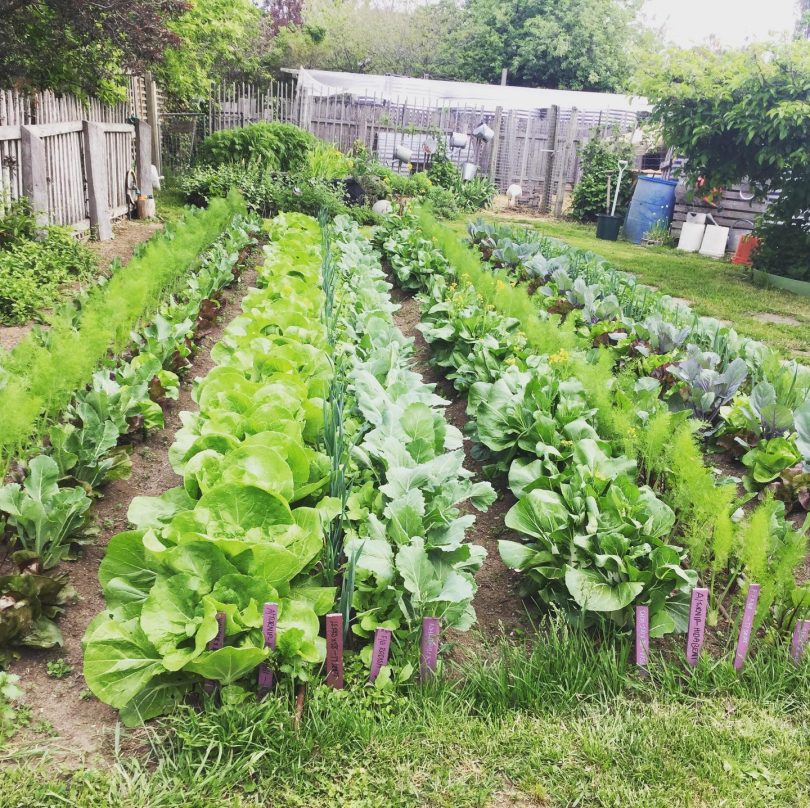 Seasonal produce is intensively grown on the plot. Photo: Supplied.

When she and Helen met, the operation geared up and they began selling food at street stalls near the Dojo Bakery and the Provisions Cafe courtyard. They joined the local farmers market as the operation continued to grow and then, when both of them lost their jobs, they took the plunge into full-time production.

“Being of the age we were, we decided we would just build this into a business”, Helen said. “We thought we could do bigger and better”.

The decision aligned with their values.

“We’ve both always seen good food as the key to a good life. Increasingly if you look around you, one of the best ways is to create it yourself. Industrial agriculture means there are more and more pollution and disease issues and chemical inputs,” Helen said. 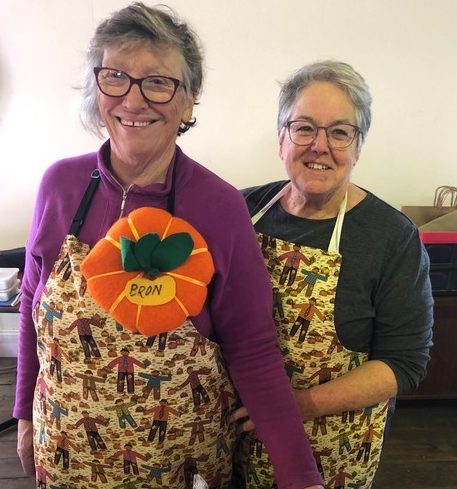 Bronwyn and Helen in their pumpkin garb. Photo: Supplied.

They joined the global slow food movement grounded in the belief that food can be clean, fairly produced, sold at a good price for the producer and not damaging to the environment.

“People often think that food is cheap, but somebody else is paying the price or bearing the cost,” Helen said.

“We always try to stay local, another important principle is to reduce food miles. Our produce won’t cost petrol and it’s the freshest you can get,” Helen said.

Wynlen uses bio-intensive polyculture systems to produce many different species in the same place together. Helen said the system requires in-depth understanding of plant species, weather, soil types and how to grow plants that take advantage of one another. 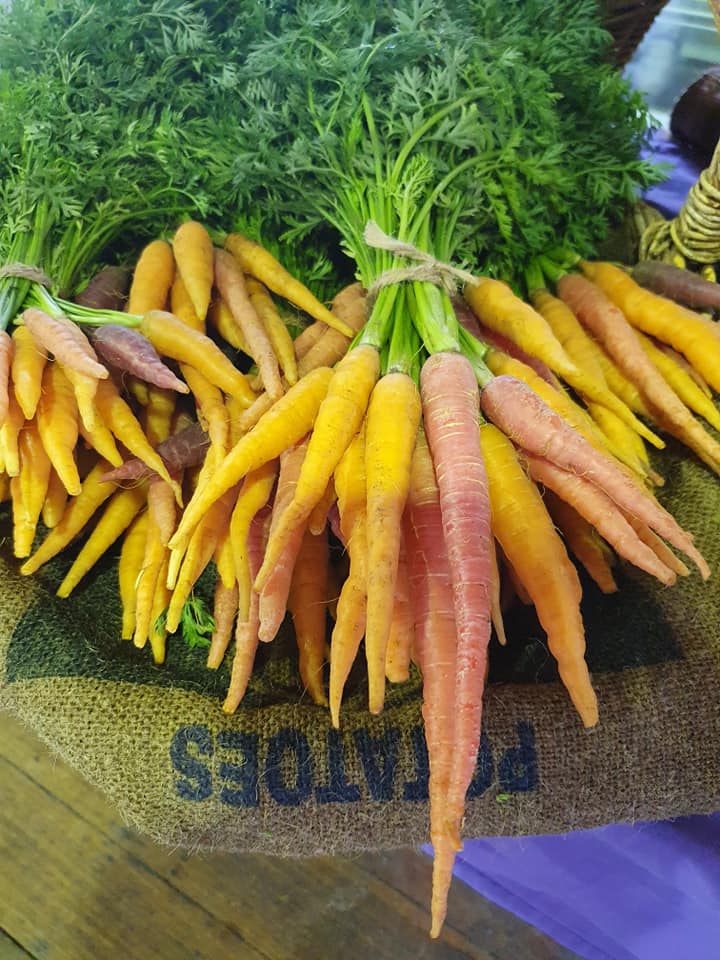 The technique discourages pests, provides its own mulch and conserves water. Biodiversity above and below the soil, means that soil and air borne diseases are significantly less active.

Producing the harvest takes both of them four or five hours a day and the remainder of their time is spent selling, marketing an detaching. They find that more and more local people want to grow their own food and many of them have taken Wynlen’s regular classes. 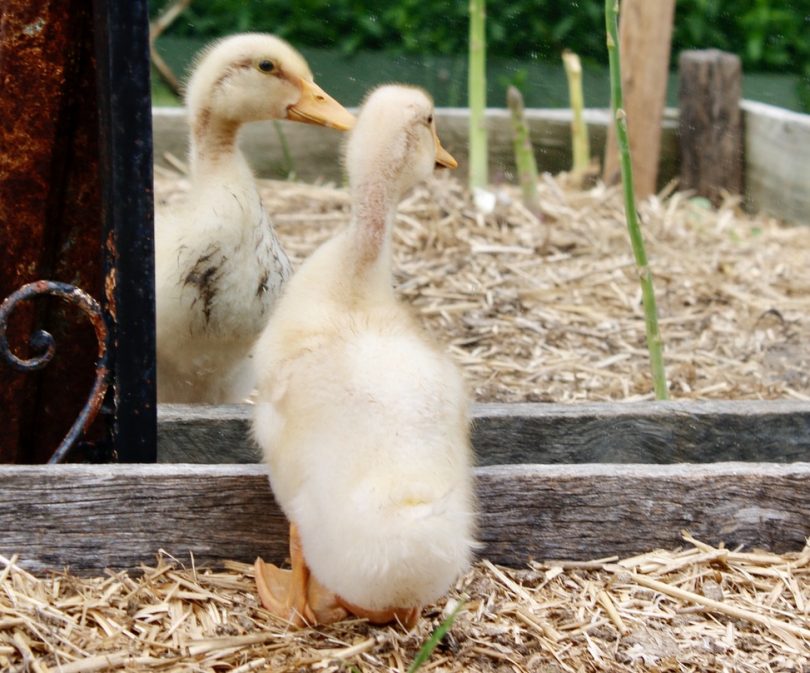 The Braidwood community now involves multiple growers and has an active network of producers who swap food.

“When we arrived in 2006, the only people growing food were Gilles Bonin and his garlic and the vegetable growers at Araluen.” Helen said.

“There are a lot of producers now. We know pretty much all of them and have had something to do with their emergence as growers.

“We’re pretty proud of it all, really. It’s taken a lot of work. In a way we made the best of a bad outcome by joining forces and doing this as a job. It’s kind of worked I think.”

You can find out more about Wynlen House’s story here.

Savita Ubhe - 56 minutes ago
Joel Suryawanshi wow domestic violence seem to be a huge issue there. Sad! View
Margaret Freemantle - 9 hours ago
Tegan Martin not sure what the answer is. Somehow, there has to be some pride instilled - perhaps well kept places get reduce... View
May Mac - 9 hours ago
Is the government competing with everyone else to book tradies in to do work? Why don't they have their own, like they used t... View
Food & Wine 12

Helen Mangos-Chadwick - 4 hours ago
What a beautiful photo, well done Dennis!!! 👌... View
Lorraine White - 8 hours ago
Really good food and such great people. Love it. View
Kathleen Brooks - 11 hours ago
Juha Turunen this is what I was talking about. View
News 81

James Hutson - 9 hours ago
Josh Ongley so you’re supporting or dissing me? Hard to tell View
Josh Ongley - 10 hours ago
James Hutson yeah because it’s not important to us In Australia we are a multi cultural society 😂😂😂 View
Food & Wine 7

bd84 - 10 hours ago
There’s always many “what about...” for things that people think are worthy. The budget isn’t a bottomless pit and th... View
HiddenDragon - 11 hours ago
"Whether the Coalition has traded in the debt truck or just parked it out of sight until needed remains to be seen." That par... View
Trevor Hicks - 13 hours ago
Jason Duarte Thanks to the ACT government... View
Opinion 94

Nathan Chadwick - 12 hours ago
What a great bloke - had the privilege of being coached by Rourkey at North Shore Bombers in Sydney before he moved to Ainsli... View
Sport 5

Notes from the Kitchen Garden: silverbeet, spinach and what to do with your green tomatoes

@The_RiotACT @The_RiotACT
It could be your dream home - this spacious #Ngunnawal family property is one of the best to go on the market in a year https://t.co/hn7Z1isnmC (10 hours ago)