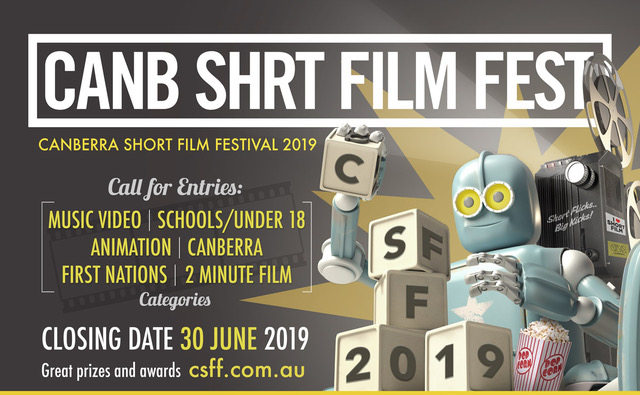 Do you have a burning idea for a film that you’d love to make? Fancy yourself as the next Scorsese, Spielberg or Tarantino? Just watched the latest release on Netflix, and thought, ‘I can do better than that!’?

You have until the first week of July to get your entry in for the Canberra Short Film Festival, which is on again this year in September.

Now in its 24th year, the Festival is an annual showcase of the best short flicks from around the Canberra region, Australia, and the world.

According to Festival Director John Frohlich, Canberra has an active and growing filmmaking community, which continues to generate high-quality work that stands up well against the best from Australia and around the world.

“We have world-class animators, cinematographers and editors living and working right here in Canberra,” said John.

“One of the great things about the Festival is that it gives these locals a chance to show their work alongside the best from everywhere else.

“In 2018, we received over 300 entries across nine separate categories.

“And because it’s a competition, that means the films are watched by a panel of experienced judges from around the world, including award-winning filmmakers, film critics, academics and film distributors.

“The judges are looking for films that use the medium to explore something beautiful, strange, scary, or happy.

“We want our audiences to be affected by the films in the biggest ways possible, and in a short amount of time.

“So that’s a great challenge for anyone who thinks they might have a good story to tell,” said John.

Even more so, it could be argued that in this digital age, where we all seem to have shortened attention spans, there is a niche opportunity for short films that capture and hold the audience’s attention, if only for a while.

This is particularly highlighted in the Canberra Short Film Festival’s 2 Minute entry section, where both emerging and experienced filmmakers are encouraged to use digital devices to tell their stories in new and creative ways.

The remainder of the nine entry categories also include sections for music videos, animated films and documentaries, as well as a special category for Under 18 creatives, and a First Nations category focusing on indigenous stories and culture from Australia and the world.

With films in any style or genre up to 20 minutes in length, this could spell the end of the traditional arguments between friends, families and couples over ‘which film to see?’

Why choose just one, when you could spend an hour watching three separate films?

The Festival takes place in multiple venues across Canberra – including Smith’s Alternative and Dendy Cinemas in the city, and stretching to the Belconnen Community Centre in the north and the Tuggeranong Arts Centre in the south.

The full festival program will include various workshops and networking events as well as Q&As with local and international filmmakers, sneak-peek sessions and pre- and post-screening parties.

To find out more and get your entry in by Sunday 7 July (the special extended deadline for late entries), visit www.csff.com.au.

The Canberra Short Film Festival is made possible thanks to the support of its partners, including Founding Partner the University of Canberra, as well as Silversun Pictures, Tuggeranong Arts Centre, Belconnen Community Centre, Northside Community Centre, the Canberra Musicians Club, Smith’s Alternative and Dendy Cinemas.

whatwik - 35 minutes ago
There's certainly a nuclear reaction from the usual suspects here any time renewables are mentioned. View
Futureproof - 1 hour ago
Nuclear - the Greens say no New hydro dams - the Greens say no Windfarms in remote areas - Bob Brown says no... View
nobody - 2 hours ago
According to the World Nuclear Association, in April 2020 there were 440 operating nuclear power reactors around the world, 5... View
Community 8

whatwik - 40 minutes ago
Hope they were able to find their own towel (not to mention undies) more easily than this lot - https://www.abc.net.au/news/2... View
Property 26

Futureproof - 1 hour ago
I ride my bike around LBG every weekend. Often I have to pull off to the left when the lycra crowd are riding two abreast, ba... View
James Forge - 2 hours ago
Warwick Bradly I work along there. I don’t think it an inconvenience I just wonder about these peoples regard for their own... View
Warwick Bradly - 2 hours ago
I've driven that road many, many times. I don't think I can ever remember a cyclist on there, or if there was, it can't have... View
Breaking 3

Have you seen the bright red and yellow ‘Happy’s Restaurant’ sign in Garema Place? It’s hard to miss. Go inside...
News 47

The Canberra Liberals have lambasted the ACT Government for focusing on issues that don't affect Canberrans and trying to turn...
Property 26

@The_RiotACT @The_RiotACT
Archie Tsirimokos is one of the ACT's top legal professionals and chair of the Canberra Business Chamber, but there's more to him than meets the eye https://t.co/BtjpRtpks0 (1 hour ago)