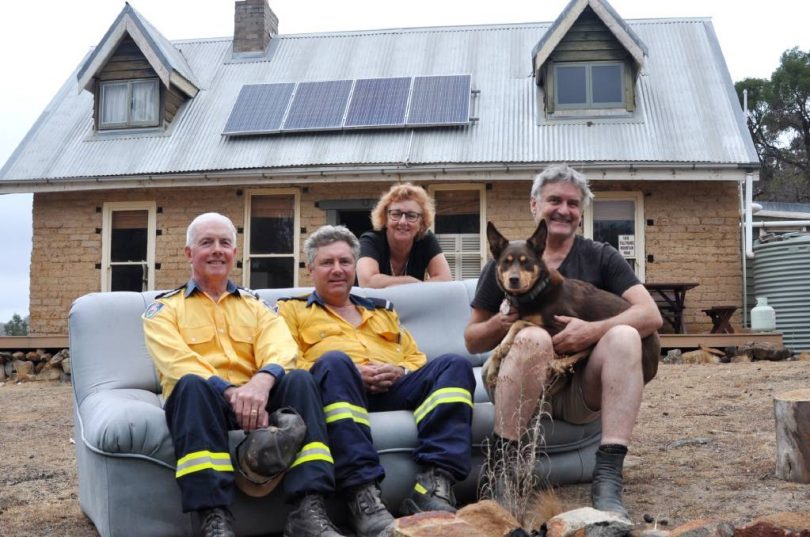 At the end of a maddening week, as husband and wife, Richard Glover and Debra Oswald, shake off the three-hour drive from Sydney, they pause for a moment and marvel at the fact their Wombeyan Caves weekender is still standing.

The slightly sloping, very rocky bush block was purchased by the well-known ABC Radio presenter, the creator of the television show Offspring, their friend Philip Clark and his then-girlfriend, Gillian, for $27,000 in 1984.

It was what you would call the best of a bad bunch, and looked even better after consuming a bladder of cheap port – a reminder that you were broke.

This would be their first home, built out of blissful ignorance and a back-breaking 3500 mud bricks.

The two couples had met in their early 20s at the Australian National University (ANU) in Canberra. As their romances blossomed and graduation passed by, Richard and Debra moved to Sydney, while Philip and Gillian stayed in Canberra. 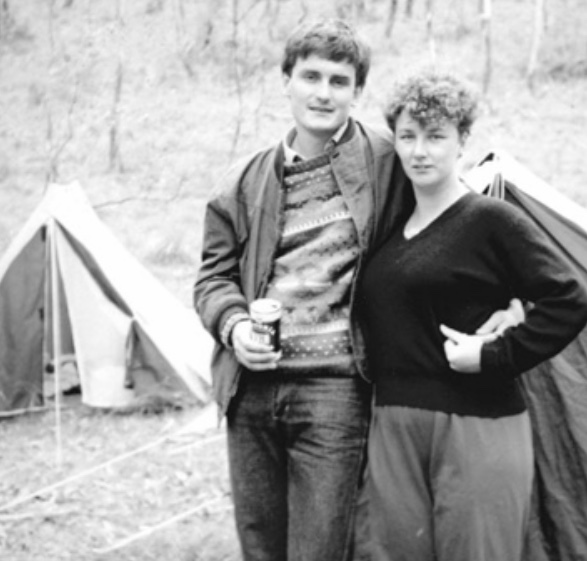 Richard Glover and Debra Oswald camp out at their new bush block in the 1980s. Photo: Supplied.

Wombeyan Caves was almost halfway between Sydney and Canberra and, perhaps more importantly, the land there was cheap.

“I still remember the first time we went there and going in on the state’s worst road, to Wombeyan Caves,” says Richard with a chuckle.

“We saw one block of land that was incredibly huge and incredibly cheap, maybe 1000 acres, but it only cost $30,000. We asked what the land was like and he had to be the world’s only honest real estate agent because he said ‘vertical’!

“Then we went a bit further and found this other little block and bought it for about $27,000, which used up all our money and credit cards.

“That’s where the mud-brick idea came from because we wanted to get stuck in but didn’t have any money for building materials.”

To make a mud brick, all you need is a whole lot of dirt, a sieve to separate the rocks from the dirt, water, a spadeful of cement, a handful of straw to bind the brick together, a pit to mix the ingredients in, and a mould.

The couples got to work straight away, dedicating almost every weekend to sleeping in tents while digging trenches, levelling the ground, felling trees for poles and, of course, making many a mud brick – all without a single power tool. 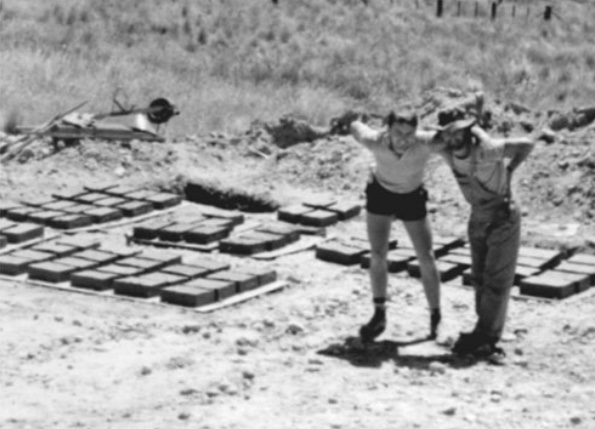 The corners of the house were mapped out using what they could remember of Pythagoras theorem from school. Rafters were hauled by cars, and mud pits were churned with 20-something-year-old bodies. It was a buoyant time in which everything felt possible.

“There are photos of us camping at the block at the very end of 1984 when we decided we were going to buy it,” says Debra.

“It’s funny to think there was this one window of time when we had just enough money to buy it between the four of us, but not enough money to buy houses, and we weren’t tied up with mortgages and children, and all those sensible things that would stop you from doing it.

“You have these crazy ideas late at night with a lot of red wine onboard, but just at the right time we jumped in.”

The mud-brick house was a labour of love for 20 or so years, and grew as their careers and families did. Richard and Debra’s youngest child, Daniel, became the fifth person on the construction site in 1987.

READ ALSO: Ripe return for winemakers in Hilltops and Canberra during harvest

Not long after, Richard was offered an opportunity to leave a Sydney newspaper and work as a European correspondent in London. The family accepted the opportunity, but couldn’t shake the bush block from their bones.

After 14 months, they were homesick. 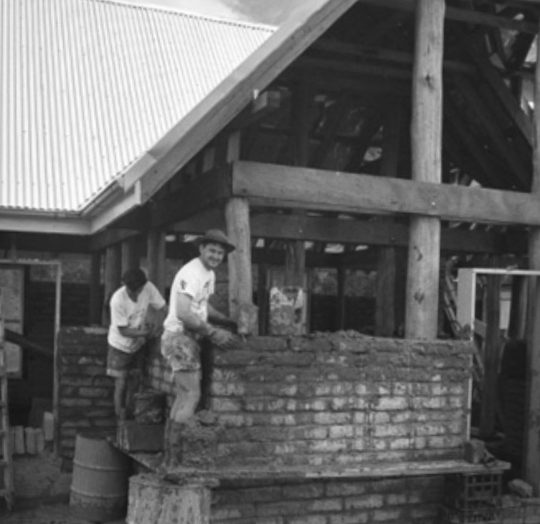 The mud bricks went on to inspire one of Debra’s greatest plays, Gary’s House, about a group of no-hopers building a house in the bush.

Joe, the couple’s eldest child, had missed out on the early construction of the house but was keen to make his mark at age 14. With the help of dad, Philip and a friend, he set about making more mud bricks for the extension, affectionately and appropriately known as The Delphi Bar, after a family trip to Greece.

Today, the mud brick house still stands despite the Green Wattle Creek bushfire that crept up to the block’s fringes in 2019 and destroyed a shed and caravan, and blew the top off the septic tank.

The fire reinforced the house’s place in their lives as a refuge from the world, a place to go off-grid and reconnect.

“There’s a real sense that this land is still raw and wild, and human beings are just a very recent arrival,” says Debra. “I think that’s good for the soul.”

You can read the full story and many more hilarious anecdotes in Richard’s book, The Mud House: How Four Friends Built a Place in the Bush.

The road from Mittagong to Wombeyan Caves is quite an adventure. Vertical drop is not an exaggeration.

Leonie Aldcroft thought this article (and book) might interest you x

Benji Philip Rush - 6 minutes ago
Trish Roberts doubt it could go very fast with 3 people on it but View
Jorge Gatica - 11 minutes ago
Chris Zigon thanks, could you also tell us how much diesel the scooter providers burn on a daily basis servicing, replacing b... View
Patrick Keogh - 15 minutes ago
... where our renewable energy generators feed it in and we take it out! View
News 22

Capital Retro - 32 minutes ago
I didn't say they were money makers - they are in fact money losers. View
chewy14 - 4 hours ago
Capital Retro, You're partially correct but not in the way you think. The SA battery has been so successful simply because th... View
David Wagner - 5 hours ago
I like it, but why not look at biogas using sewage plants eg. Europe or Stirling engines or ........ View
Food & Wine 14

Scott Stevenson - 56 minutes ago
Best Bacon and Egg Sandwich *EVER*! And the rest of their menu is not too bad, either..!! :)... View
FB - 3 hours ago
Canberra is certainly an odd place. Where else could you start a business getting people to pay $10 for a toasted sandwich. I... View
Ivana Ryan - 4 hours ago
Toasted sandwich and a coffee 😋 Bojana Simic View
News 3

Alison Brittliff - 2 hours ago
Should be the same as football games View
Jenni Zimoch - 3 hours ago
Taylor Rundell we haven't even had any cases a part from one or 2 in hotel quarantine in MONTHS too. And I'm not sure we ever... View
Taylor Rundell - 15 hours ago
In New Zealand they removed these types of restrictions once they were at covid zero, and other states are more relaxed - why... View
Property 1

Ol L - 3 hours ago
But apparently according to Mr Barr there is no link between increasing landlords costs via land tax and any rise in rents? I... View
Lifestyle 27

Geoff N Narelle - 4 hours ago
I think that the author of the article has romanticised the story somewhat. It was probably a 20 minute bike ride each way on... View
Food & Wine 3

Acton - 6 hours ago
Stupid. They slip off accidently.... View
Property 5

HiddenDragon - 19 hours ago
Why stop with repatriation flights? The logical conclusion to the economies of scale argument (which is equally relevant to j... View
show more show less
*Results are based on activity within last 7 days

There are 2789 Canberrans on the ACT waiting list for public housing and former Barnardo's mother of the year and...
Opinion 35

It’s not every day you see armed soldiers appear from the bushes in the dark while driving home from work....
News 22

Neuron Mobility has announced their fleet of orange e-scooters have clocked up 1 million kilometres since their introduction in Canberra...
Opinion 60

@The_RiotACT @The_RiotACT
Messages from history and of our hopes for the future have been placed in a time capsule in the restored roof of Canberra's Shine Dome https://t.co/YgWNidOIwH (23 minutes ago)

@The_RiotACT @The_RiotACT
Previous land releases at South Jerrabomberra have almost sold out and there is big interest in the next land release of 30 blocks on Saturday, 1 May https://t.co/KstCzSsFt9 (2 hours ago)

@The_RiotACT @The_RiotACT
Funding issues from the developer of Queanbeyan's long-awaited cinema are delaying the project more than three years after its DA was first approved https://t.co/41vCKCl5hx (3 hours ago)